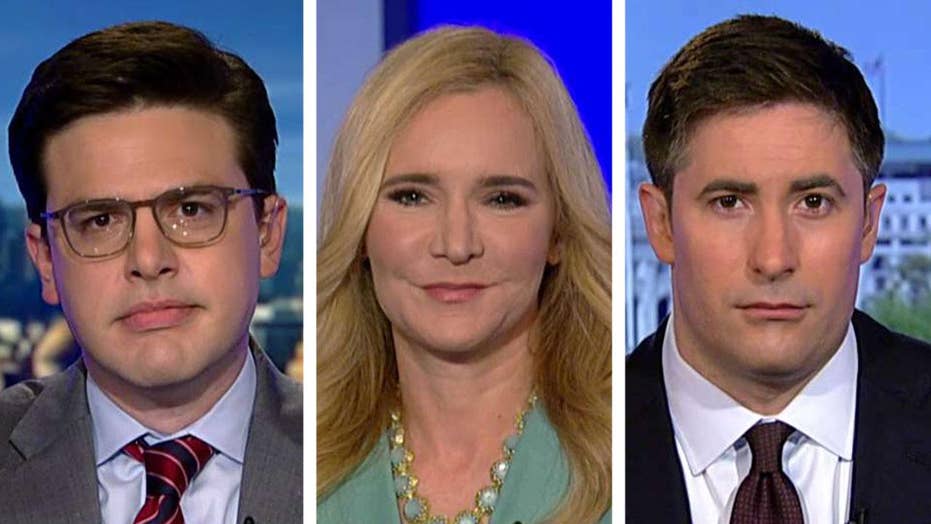 This is a rush transcript from "Special Report with Bret Baier," August 29, 2018. This copy may not be in its final form and may be updated.

ANDREW GILLUM, D, FLORIDA GUBERNATORIAL CANDIDATE: Those who couldn't vote for me because they may be Republicans, I want to be their governor, too.

RON DESANTIS, R, FLORIDA GUBERNATORIAL CANDIDATE: As governor I will work my off to accomplish great things for this state. I will show the courage to lead, and we'll keep Florida great, and we'll make it even greater.

GILLUM: I'm going to stay consistent with my values and I'm going to offer voters something to go out and vote for and not just against.

DESANTIS: I think that when voters look, do they really want to gamble on a Democratic Party that has gone so far to the left. That is not what the broader American public is looking for.

BRET BAIER, FOX NEWS HOST: The Florida governor's race is now set in stone, and this race could be epic. Actually it could be a proxy race for 2020, if you look at Donald Trump as president, supporting Congressman Ron DeSantis, and Bernie Sanders supporting Andrew Gillum, the Tallahassee mayor who surprised everyone with a win. Gillum winning by about three percentage points, but was really a surprise over Gwen Graham in that race.

In the Republican side it wasn't even close. Ron DeSantis beating Adam Putman. The president tweeting "Not only did Congressman Ron DeSantis easily win the Republican Primary, but his opponent in November is his biggest dream, a failed Socialist Mayor named Andrew Gillum who has allowed crime and many other problems to flourish in his city. This is not what Florida wants or needs!"

We'll start with that race. Let's bring in our panel, Matthew Continetti, editor in chief of the "Washington Free Beacon," A.B. Stoddard, associate editor at Real Clear Politics, and Jonathan Swan, national politics reporter for "Axios." OK, Matthew, this quite a showdown down there.

MATTHEW CONTINETTI, EDITOR IN CHIEF, "WASHINGTON FREE BEACON: Already, we didn't waste any time getting to really what the 2018 midterm will be about. Neither party really has an agenda, so it's going to be about personalities and insults and were one stands in relation to the president.

One thing, though, Bret, of all the states, Florida is perhaps the most MAGA-ist. President Trump has about 50 percent approval there. The Democrats haven't been in the governor's mansion since the last century, and Rick Scott, the current governor, who is challenging incumbent Bill Nelson, has a very slight lead according to Real Clear Politics.

BAIER: The Democrats are looking at the past races, and to your point, they haven't won. And so this is a candidate who is far to the left of the other candidates that have run for governor in years past.

A.B. STODDARD, ASSOCIATE EDITOR, REALCLEARPOLITICS: That's right. The Bernie wing has not been doing very well in these primaries, and this is a big victory for them. What you are going to see is the Democratic Party try to come in and help Senator Bill Nelson, the incumbent Democrat, in his Senate race against Rick Scott. He's not doing very well. He's going to need a lot of help.

They are going to try to mobilize on some new issues in Florida that are post-2016. Those are the Parkland shootings, the storm survivors have moved from Puerto Rico to Florida. Trump's response to hurricane Maria is less than adequate to them. These are new factors, but at the same time Republicans clearly have an advantage here. The idea of someone running on let's abolish ICE and Medicare for all is going to suddenly take over the governor's mansion is probably a fantasy.

BAIER: Andrew Gillum was on today with Shep. I heard him mention red tide and algae blooms three times. This could be different issues here. But there was a controversy today. Ron DeSantis on our air had this to say, and this was the reaction.

DESANTIS: We have got to work hard to make sure that we continue Florida going in a good direction. Let's build off the success we've had on Governor Scott. The last thing we need to do is monkey this up by trying to embrace a socialist agenda with huge tax increases and bankrupting the state. That is not going to work. That's not going to be good for Florida.

SHEPARD SMITH: Was that racist, or a figment of speech?

GILLUM: In the handbook of Donald Trump, they no longer do whistle calls. They are now using full bullhorns.

BAIER: The DeSantis campaign put out a statement after that. "Ron DeSantis was obviously talking about Florida not making the wrong decision to embrace the socialist policies that Andrew Gillum espouses. To characterize it as anything else is absurd. Florida's economy has been on the move for the last eight years and the last thing we need is a far left Democrat trying to stop our success." Obviously he didn't say that in the soundbite.

JONATHAN SWAN, NATIONAL POLITICS REPORTER, "AXIOS": Yes, but again, I always hesitate to leap to motivation when it's not -- like, I don't know, it's an idiom, it's a phrase. God forbid I might say something like that one day.

BAIER: With all your Australian --

SWAN: With all the stuff I say, I've got some terrible expressions from Australia. I hope it wasn't a racist comment. When I heard it I didn't see that myself, but I'm also willing to admit that I have blind spots. So I don't know.

BAIER: All it shows is that this is going to get intense very quickly.

SWAN: It's going to get straight to, we are going to get really heated, I think what Matthew said is exactly right. And what's interesting to me is, how does someone like Ron DeSantis, we talked a lot about the democratic socialist, but he has hugged and embraced Trump more than -- he ran a commercial with him reading "Art of the Deal" as a bedtime story.

SWAN: So Trump is not popular among white college-educated men and women. And he now has to appeal to a general electorate. So yes, he is obviously favored to win, but I don't think that he's not going to be without problems.

BAIER: The other race obviously is Arizona Senate race that is going to be set up now, Martha McSally versus Kyrsten Sinema, which is going to be a big race to follow as you look at Arizona. I want to turn to the races that you all chose, and as we look at the balance of power in the Senate, Republicans 50, 49 Democrats, one vacancy obviously that will be filled. Democrats need to gain two to gain control in the Senate. In the House Democrats need a net gain of 23 seats to gain control of the House, just to keep us honest here. Matthew, your pick for interesting race.

CONTINETTI: I'm looking at Kentucky six in the House. This is a seat where in 2016 the Democrats were held to 40 percent of the vote. Obviously, a Trump district held by Republican Andy Barr. He faces Marine aviator Amy McGrath. If she can take this seat on election night, it bodes very ill for Republican changes to hold the House.

BAIER: Staying in the House, your pick?

SWAN: I think Illinois sixth is a fascinating race because it's really a test case of high quality Republican member who works his district hard, Peter Roskam, raises money, does all the right things, has a distinct brand, and yet represents a district that has Trump's singular problem, above all others, which it's got 52 percent from the most recent census have a bachelor's degree. This is a prototypical suburban district, and Romney won it by eight, and Clinton won it by seven. So Trump is toxic there. And Roskam usually wins easily, but he's in a real race this time.

STODDARD: Much like the Florida governor's race it is going to be very, very hard for Beto O'Rourke, congressman, to win and beat Ted Cruz in the Texas Senate race. However, he is a money raising dream. He is basically the national excitement of Democrats. If he were to win this race or even come close, he's atop the list for Democrats of 2020 contenders, no doubt. They are hoping for the next Barack Obama.

This will be hard for him. He is interestingly behind where Hillary Clinton was in a state with his numbers with Latinos. He would really have to surge with them to take on Cruz. But he's in a dead heat with him according to the latest Emerson poll. So it's something for Cruz -- it's not impossible for this man to beat Ted Cruz. It's going to be an interesting --

SWAN: I think Latino turnout is one of the big question marks that a lot of strategists and operatives have. It's not clear that they are going to turn out in the numbers that Democrats hope.

BAIER: All right, next up, President Trump today keeps the Twitter flowing. We'll take a look.