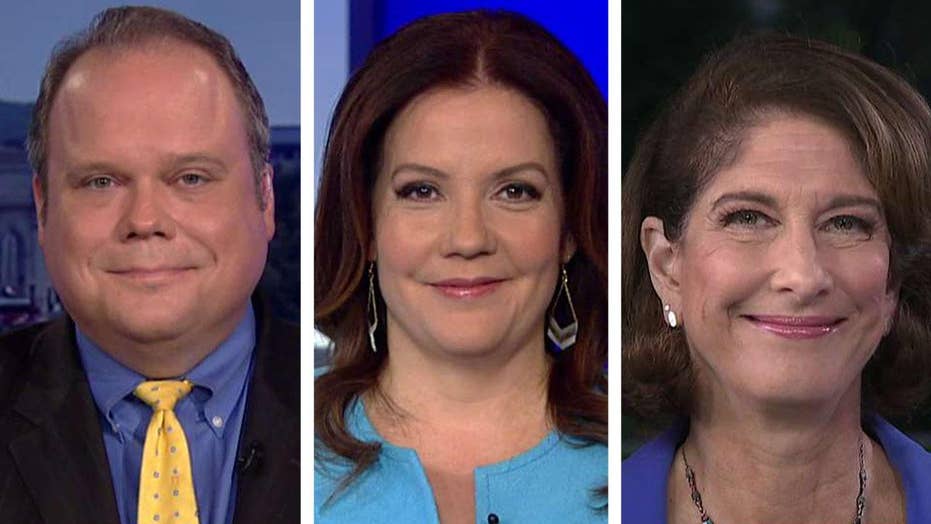 This is a rush transcript from "Special Report with Bret Baier," September 30, 2019. This copy may not be in its final form and may be updated.

HOUSE SPEAKER NANCY PELOSI, D-CALIF.: It is wrong for a president to say that he wants you, another head of state, to create something negative about his possible political opponent.

SCOTT PELLEY, CBS NEWS: Do you expect the testimony of the whistleblower?

PELLEY: Your committee already has an agreement with the whistleblower that he will testify?

SCHIFF: We have an agreement that he or she will testify, yes.

PRESIDENT DONALD TRUMP: The statement I made to the president of Ukraine, a good man, a nice man, new, was perfect. It was perfect. But the whistleblower reported a totally different statement.

We are trying to find out about a whistleblower.

BRET BAIER, ANCHOR: The president saying he wants to find out about the whistleblower.

Meantime, his personal attorney, Rudy Giuliani, subpoenaed for documents by various committees. Rudy Giuliani, by the way, will be on Sean Hannity's show tonight here on Fox News Channel.

Late this afternoon, The New York Times moved a piece that said "Trump Pressed Australian Leader to Help Barr," the attorney general, "Investigate Mueller Inquiry's Origins." It got a lot of pickup and social media press and press all over. One thing to note, though, he said something like this publicly right here at the White House not too long ago.

BAIER: The DOJ out with a statement that it wasn't pressured. It was asking for cooperation. That's where we'll start with our panel: Chris Stirewalt is politics editor here at Fox News, Mollie Hemingway, senior editor at The Federalist, here at the White House, Mara Liasson, national political correspondent for National Public Radio. OK, Mara, a lot of things happening all at once. Thoughts on this day as we --

MARA LIASSON, NATIONAL POLITICAL CORRESPONDENT, NATIONAL PUBLIC RADIO: This story keeps on unfolding. We're going to have some testimony this week. It's going to be behind closed doors. But the big question is, does anything change the trajectory of this story? We've also had reports that Secretary Pompeo was listening in on that call. Was he? I don't think we have gotten a statement from him yet. But every day there is a little bit more, and that's what happens when you are in an investigation like this.

BAIER: Mollie, your thoughts on where we stand tonight?

MOLLIE HEMINGWAY, THE FEDERALIST: Well, it is interesting this most recent story that came out from The New York Times that promised this bombshell, this reporting that Trump and the Department of Justice are looking into the origins of this 2016 collusion conspiracy theory that Donald Trump colluded with Russia to steal the 2016 election.

It's not a bombshell. As you note, it has been reported for months prior to now.

And it's important that this be investigated. We had for several years a dangerous and damning conspiracy theory that was perpetrated throughout the media and by powerful Democratic politicians and power people in our own government, and it was done in conjunction with some people in other countries. It's important that if we are to have free and fair elections that we understand how this dangerous theory got spread, who was involved with it.

And it also helps explain why there's so much pushback about this investigation. This might be the type of thing where it doesn't look good.

There was a lot of involvement with Democratic National Committee folks in Ukraine, and other countries that were involved in this, and they might not want that coming to light. And that could explain why there's so much pushback to these efforts to get to the bottom of the story.

BAIER: Chris, there are two different things here. The Ukraine call, obviously, deals at first in the call with asking for help on the 2016 investigation, which, as Mollie points out, has been long documented about whether Democrats asked Ukraine to help before the investigations to try to get dirt on Trump.

CHRIS STIREWALT, FOX NEWS POLITICAL EDITOR: He was talking about CrowdStrike. I don't want to go back down. Who cares?

BAIER: That's what I'm saying. It starts there, then it goes to Bidens and 2020.

STIREWALT: And then it goes to the Biden thing. And who could possibly -- I will tell you this much. Voters, or at least normal voters, don't care.

They do care, there is a fundamental question that Democrats have raised, they're accusing the president of a big thing, which is acting inappropriately, using the power of his office to try to harm the frontrunner for the Democratic nomination in 2020.

The simplicity of the Democrats charge is helpful to them in a way, in a way that it never was when you had all of the conspiracy that surrounded the Russia stuff and the millions of pages and all over the things. This one is a little more elegant.

But at the same time, what are you going to do every day between now and the end of the year as you're rolling out the impeachment process? If it's just one thing, if it's just one phone call that the president himself says he made, if it's just that, what are you going to do with all of your members and all of the stories and all of the stuff so there starts to be a little bit of a news vacuum that occurs around this thing?

BAIER: And let me play the soundbite from Doug Collins and Lindsey Graham about specifically the whistleblower.

REP. DOUG COLLINS, R-GA.: As we go forward here, is that going to be the standard that has been changed now in the intelligence community to where basically anybody there can take any report that they want to over the watercooler or wherever and decide to file a complaint?

This is more serious than this.

SEN. LINDSEY GRAHAM, R-S.C.: Why did they change the rules about a whistleblower, you can use hearsay when you could not just weeks before the complaint? So I think this thing stinks.

The second thing about the form being changed, there is another story that the form has been in its current form since May of 2018, that it's not something that was just changed. In other words, that secondhand information is acceptable.

BAIER: Mollie, what about this back-and-forth about knowing about who the whistleblower is and what the president has said about him or her?

HEMINGWAY: First off, to clarify, the Intelligence Community I.G. did came out and admit that they have changed the form, whereas it used to require firsthand knowledge and now it doesn't, and they say that is a reflection of a more accurate treatment of the statute at hand.

BAIER: Chris, when you start going down this road about protecting whistleblowers, whether this person is a whistleblower or not, and what the president has tweeted over the past couple, 48 hours, it becomes a hot issue on Capitol Hill.

STIREWALT: It becomes a hot issue on Capitol Hill because the need here for Trump and his supporters is to create a counternarrative. The Democrats have a good narrative, and their politically useful narrative that we see reflected in the changing opinions in public opinion polls is that the president acted wrongly in trying to get dirt on Joe Biden. So now team Trump is trying to put together its own counternarrative, as it pretty effectively did against Robert Mueller and the investigation. But they need to come up with their cast of nasties that they say are part of the deep state. I assume the whistleblower will be a key figure in their counternarrative that they're going to push forward, this person is unreliable, it's a liar, they donated to a Democrat, whatever they will be able to find about whoever is involved in this, so that they can say the president is the real victim here. That's their need.

BAIER: Is there a sense that Democrats will try to stay focused, laser focused, on Ukraine during, on this phone call, on this whistleblower, as opposed to expanding to other things?

LIASSON: That is my understanding. This has not been completely resolved, but it seems like the Democratic leadership would like to stick to this episode. They feel it is easy to understand. If Robert Mueller's report was this extremely large tome that no one read, the complaint and the transcript of the call is light beach reading. You can read it on your lunch hour and decide for yourself if the president abused his office.

BAIER: After all the investigation, Mollie, aren't you surprised that this wasn't a part of Mueller in some way, shape, or form?

HEMINGWAY: It is particularly interesting when you think about what Senator Grassley and Senator Johnson did in their letters to the Department of Justice today. They asked why two years ago, more than two years ago, they notified the Department of Justice about problems with Ukraine meddling in the 2016 election and got no word back at all. That would've been clearly within the scope of what the Mueller investigation should have been looking into. That they weren't, speaks to the problems that people have with that very partisan probe.

BAIER: There are number of long pieces, Politico, New York Times, about those early investigations into Ukraine and the Democrats. We'll continue to follow all sides here. Panel, as always, thank you.