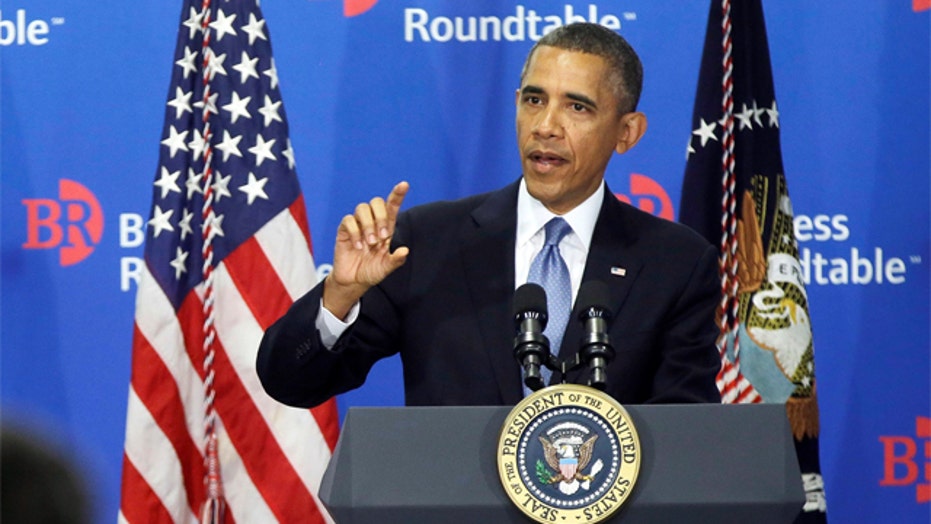 STEVE FORBES: What he is guilty of is anti-democracy arrogance. There is always negotiation around raising the debt limit and budget issues. He ran through Congress a healthcare bill that no one likes, it's more unpopular today than it was 3 years ago when it was passed. It's becoming increasingly unworkable until the American people say ‘enough'. He says that's arrogance, I have another word for it.

MORGAN BRENNAN: I think it's a loaded word and I see why he is using it when you look at the definition. The bigger point is that this is poor politics, even worse for business. You even have republican leaning chamber of congress saying quit tying these two together and let's get some legislation through. When you look at the history of economic fiscal policy face-offs, the American economy is always the thing that takes the hit, and that's without throwing Obama-care in the mix. Look at 2011 when the last debt-ceiling face-off happened we saw stock market's plunge and a rating downgrade.

SABRINA SCHAEFFER: Extortion is criminal. This president is grasping for straws because 53 percent of Americans realize that Obamacare is going to drive their healthcare costs up. Republicans are doing the right thing. This is risky business but they realize that Obamacare isn't ready for its big debut. It will drive up costs, cut jobs; we have a lot of work that needs to be done in order to implement this properly.

RICK UNGAR: The moral of the story is be careful what you say in the senate because you may be in the white house one day. Obamacare didn't exist when he was a senator. I'd like to know when in our history when a piece of signature legislation for any president was held like this. If he didn't do away with his own signature legislation they were going to close the government.

JOHN TAMNY: This is why republicans should be obstructionists. Obamacare is bad for our health; big government is bad for the economy. In my view, if Republicans aren't defunding one and shutting down another, what's the point in electing republicans? We hear about the bad politics and the republicans acting as obstructionists in this way but I think much worse politics for republicans would be to get to 2014 and say Obamacare is in full flower and the government is much larger, why did we put them in power to begin with?

MIKE OZANIAN: The person that is guilty of extortion is president Obama, when you look at the last 3 years. His record level of spending, his record level of borrowing which has been coupled with all the bond- buying by the fed. It was totally destabilized the value of the US dollar and it's a form of extortion that has been particularly cruel to the poor and elderly who rely on fixed income. The president is the one who has committed extortion here by hurting the poor and elderly the most.

STEVE FORBES: In terms of money, this is chump change by Washington's standards. This is all about politics and the proof is when this scandal first revealed itself, the IRS agents lied about it. They said it was a few rogue agents but if it wasn't a crime, why did they lie about it?

RICK UNGAR: There probably aren't too many websites that are liberal with anti- Obama rhetoric. It should shock nobody that the IRS would look at websites to see if their violating 501c4's. If they are unfairly targeting one side, that's wrong. You have to show me that they are looking at both sides of this to see where there are violations in 501c4's; you should want them to be doing this. If people are getting improper tax exemptions, that's hurting both you and be no matter what side of the aisle they come on.

ELIZABETH MACDONALD: I think the Tea Party was unfairly targeted based on the evidence that has been presented. The problem is that the IRS is abiding by a circus mirror of a tax code that is subjective. It doesn't have bright lines. What these groups were doing is called social welfare. They are trying to educate the people. The IRS was also using media reports for their leads. Washington Post columns that were against the tea party and that's really bad. Having a subjective tax code, here's the problem; it's like asking a herd of cats to herd themselves into a group. They can't do it without the bright lines.

MIKE OZANIAN: We had the Lois Lerner email that was discovered, 2.5 years ago long before the statements were made about Cincinnati where Lerner was clearly concerned and wanted this to go up to the higher levels of the IRS. Maybe you can give the Obama administration the benefit of the doubt if he hadn't had the fast and furious, the AP situation, and the lies about Benghazi. This is pattern, they lie about everything.

SABRINA SCHAEFFER: I'm glad this report came out; just add it to the pile of evidence. Remember last June when the Treasury department inspector went in and said look, if they were investigating progressive groups it was far less common, far less intrusive, and far less obstructive. The fact is that this is clearly political it has something to do with the complications of our tax code. This is a government that wants to muzzle its political opponents, it's not a conservative issue, and it's an issue about liberty.

JOHN TAMNY: It's not coincidental and it's always going to be the case that entities like this will be politicized. The bigger scandal is that we live in a country where we have to prove our income to the federal government. The bigger scandal than that is that we are guilty until proven innocent in the eyes of the IRS. Reform? I think that's naive. The only way to fix this is to abolish this in favor of a national sales tax or we aren't proving what we earn on an annual basis.

ELIZABETH MACDONALD: Let me give you quote of Al Gore's investment shop, John Doerr he runs Kleiner Perkins, he said green investing doesn't depend on government investing it's about supply and demand. We are seeing venture capitalists bringing back their investment in green tech back to 2009 levels. A recent survey said two thirds are saying they are going to invest less this year than in 2012 because they are seeing that the returns in their investment are just not coming in.

MORGAN BRENNAN: I'm not a fan of wind energy. I'm not surprised that T. Boone Pickens would lose money on wind energy because I don't think it's financially viable like other technologies. For every bankrupt Fisker, you have a Tesla which is a success story. That electric car company, also a Forbes 400 billionaire, Elon Musk. That company actually paid back its half billion government loan this year, 9 years early. We have seen that stock surge more than 400 percent in the past 12 months.

JOHN TAMNY: This is a reminder that when you get in bed with government it comes back to haunt you. We see that in the airline industry created by government in constant bankruptcies and now we are seen in this 12th century concept called green energy. When you pair up with the government on such a horrifying idea that would never be funded in the private sector, you will lose. Hopefully other investors have figured this out.

STEVE FORBES: The government shouldn't be an investment capital business because it doesn't have the talent for it. Let private investors see what works and what doesn't work. Why is the government in capital investment business anyway? Whether it's green energy, housing and anything else. Let people make the decisions, not bureaucrats taking money from us and giving it to their political friends.