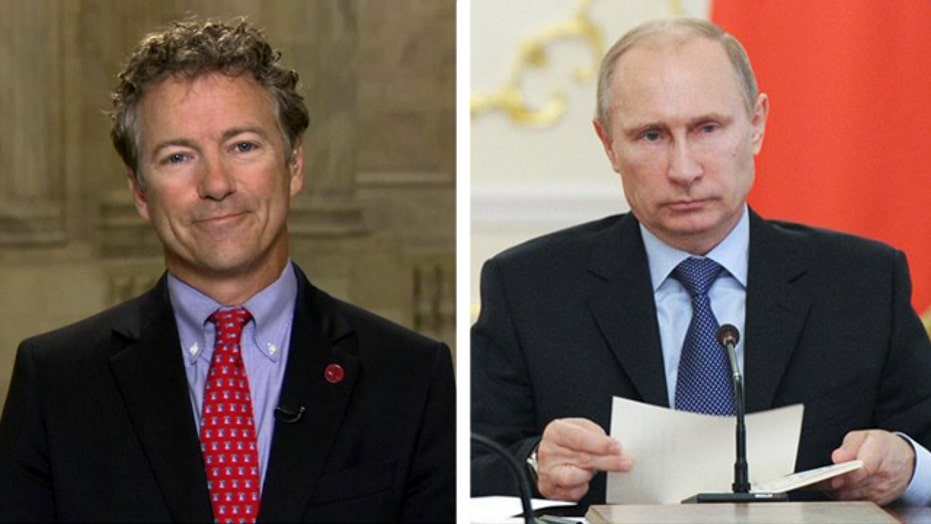 This is a rush transcript from "Hannity," September 12, 2013. This copy may not be in its final form and may be updated.

But first tonight, one of the most untrustworthy, ruthless authoritarian dictators in the world has a message for you the American people. Now, helping him deliver that message, none other than the leftists over at The New York Times in a brazen op-ed penned by Russian President Vladimir Putin. He warns, quote, "The potential strike by the United States against Syria despite strong opposition from many countries and major political and religious leaders, including the Pope will result in more innocent victims and escalation potentially spreading the conflict far beyond Syria's borders." He goes on to write, quote, "It is alarming that military intervention in internal conflicts in foreign countries has become common place for the U.S. Is it in America's long-term interest? I doubt it."

Now, later in the column, comrade Putin dismisses our long held belief that America is the greatest country on earth by writing, quote, "It is extremely dangerous to encourage people to see themselves as exceptional, whatever the motivation." Now, throughout much of the day a number of lawmakers were asked to the react to this lecture. House Speaker John Boehner said he was insulted. The Democratic chairman of the Senate Foreign Relations Committee said it made him quote, want to vomit and while the White House wasn't exactly complimentary of Putin's critique either, Jay Carney's first reaction to the column, left many people scratching their heads. Watch this.

JAY CARNEY, WHITE HOUSE PRESS SECRETARY: Both in his Op-Ed and in the statements and actions that we have seen from President Putin and his foreign minister it is clear that President Putin has invested his credibility in transferring Assad's chemical weapons to international control. And ultimately destroying them. This is significant. Russia is Assad's patron and protector. And the world will note whether Russia can follow through on the commitments that it's made.

HANNITY: All right. Let's keep in mind that Russia helped arm Syria with chemical weapons in the first place. Now, Jay Carney made that clear they are Syria's protector which is why it is almost laughable that we would trust anything that Vladimir Putin says. In short, the international embarrassment for team Obama continues to unfold. Here with reaction, Kentucky Senator Rand Paul. Senator, welcome back to the program. What is your reaction to all of this?

SEN. RAND PAUL, R-KY.: You know, Sean -- well you know, what I heard Sean. I heard the New York Times loved the anti-American screed so much that they have offered Putin a position on their editorial board.

HANNITY: Well, maybe I guess, it will be the new Frank Rich, the new writer at the New York Times.

PAUL: You know, and Russia is struggling a little bit economically. If they all -- maybe he'll come over and work for them.

HANNITY: All right. But there is -- and I hate to admit it this. I really do. But there is some truth. When he called Kerrie out on being wrong about who the rebels actually are, I mean, even the free Syrian army's general, brigadier general said that Israel is their enemy. And he didn't -- a lot of these rebels are Al Qaeda-linked. Al-Nusra and some of these other groups. So, he is right on that. Is he not? And isn't the administration wrong? I hate to admit it, but I think he's right.

PAUL: Well, it is a really messy situation and it's why a military solution just doesn't exist. If we bomb Assad, that he becomes so unstable then the chemical weapons become maybe loose within the country. Maybe Al Qaeda, maybe Al-Nusra. Maybe the extremists on the other side get possession of chemical weapons which may well be worse than Assad. If we bomb Assad, the refugee problem in Jordan I think becomes worse.

If we bomb Assad, I think he may unleash chemical weapons on Israel. There's a lot of things that come from bombing Assad. None of them are good. And I think it also emboldens the Islamic rebels who kidnapped two bishops. They're beheading people and putting it on the video. One of these Islamic rebels was eating the internal organs of one of the Syrian soldiers. I don't see any good party to this war.

HANNITY: What do you, I think he's right. Also in as much as this could spread and be a broader conflict. But looking at his actions and all of this, the editorial, calling Kerry a liar, moving his ships into the region, threatening to protect Syria with missile defense, threatening to arm Iran, what do you make of this -- it's almost saber-rattling by him against the U.S. What do you think his purpose here is?

PAUL: Like President Obama, to save face. So, both sides want to save face, both sides want to rattle their sabers and show how strong they are. But in reality, if you really want a diplomatic solution, neither side should be saying a word about this publicly. We shouldn't be tweaking each other and digging at each other like 7th graders. We should be quiet, diplomatic about it and understand that really there is a self-interest to both Russia and the United States to getting those chemical weapons out of Syria.

HANNITY: Wait a minute. Because there is only one guy doing the tweaking here. And that's Putin. That's Russia. I don't see --

PAUL: Well, you may be right. You know, I mean, if there were a tennis match it would be advantage Putin. He seems to be running circles around the administration.

HANNITY: What do you make of the fact that he was right about the Boston bombers and warned us and we didn't listen to him. And he's right about the rebels being Al Qaeda-linked and more extreme than the characterizing by John Kerry and by Barack Obama?

HANNITY: Do you make of Eric Cantor's show vote where in one vote it would have had house members both fund and defund ObamaCare so they could say they voted to defund it but in reality, they were really funding it?

PAUL: Well, I think they have gotten the message from the House members, the House Republicans. I think they shot the idea down. And I really think what we need to do and what the people want us to do is Republicans control the house. People are realistic. We know we can't win every battle up here. But we should use that leverage to try to make ObamaCare less bad. All the news reports today are talking about low income people having to provide insurance for their families and being penalized. Even Bill Clinton is talking about this now. There are so many unintended consequences of this bill, it's going to be a disaster for the country. The president, even though it is his baby should delay the whole thing for a year. And we should study what's going to happen if this bill gets implemented.

HANNITY: To buy off big labor, now they are going to carve out exemptions, so to buy their silence while the rest of America is caught up in the system. What do you think of that?

PAUL: Without question it is unconstitutional to amend legislation by the president without Congressional authority.

PAUL: Yes. This is a constitutional law professor who needs to go back to square one and redo his own course. The thing is, is the constitution says, the legislature writes the law, the president executes it. But he doesn't get to execute only the parts he likes or the things he thinks may work.

HANNITY: All right. Let me ask you. So, you're headed to New Jersey tomorrow?

PAUL: I'm going to be endorsing Steve Lonegan who's running up there. And we'll going to be talking about real people who are out of work in Newark instead of Cory Booker's imaginary friend T-Bone. We'll going to look for T-Bone. But my understanding is, he's a composite, he's not a real person. So, I don't know. We want to talk about real unemployment. He wants to talk about his imaginary friend.

HANNITY: Are you disappointed Governor Christie apparently is not going to be there to meet you?

PAUL: We're going to have a beer stein, full of beer for him, if he'll show up. I want to break bread and have a beer with him sometime.

HANNITY: You're there to support Steve Lonegan in his race. Are you going to endorse Chris Christie? You guys have had a little back and forth.

PAUL: You know, I hadn't thought about that. He hadn't asked me yet. I'm going to stay up late tonight and see if he calls and asks me for my endorsement.

HANNITY: And what would your answer be if he does?

PAUL: We do a -- we vet all candidates, Sean. I mean, I have to wait. We have to get a request. There is a process here. It doesn't happen, you know, on live TV.

HANNITY: Why not? No better time, just me, you and a couple million people. I mean, that's not a problem.

HANNITY: Is that your endorsement?

PAUL: That's as bad as good as you can get, Sean. What else can I say?

HANNITY: All right. I'm just pressing you. It's my job. I got to ask. All right. Good to see you, Senator. Thanks for being with us.