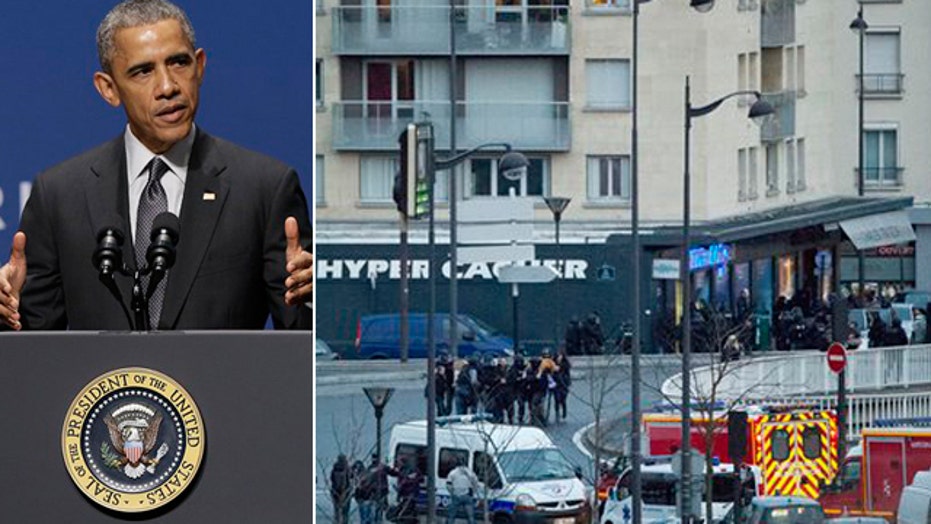 JESSICA TARLOV: I think using the word ‘random' was a mistake. I don't think there's really any way to defend it. I think that's why josh earnest addressed it, perhaps poorly in the news conference, and then in his tweet. The President's hesitancy to call it "Islamist" is, I think, fear that people will think that he's blanketing all Muslims with this. I think that's also a mistake.

AINSLEY EARHARDT: If you watched that whole exchange with the reporter [at the White House press briefing] it was so obvious that he was trying to deny any religious affiliation with ISIS, and I felt like it was almost like the President and his team had been briefing him in the briefing room behind the scenes right before this press conference and saying, "say this was random, do not admit that it wasn't". It was so obvious to me. So the tweet, for him to step back and take it back, I guess he realized the effect it had on everybody.

JONATHAN HOENIG: Eric, it wasn't just even this comment, it's been the President's whole approach in foreign affairs, particularly towards Islamic terrorism. What you've seen is evasion on a mass scale. To your point these are, according to the president, these are just isolated incidents; just a couple of folks, a few bad apples. He's oblivious to the 30-plus years of Islamic terrorism. He won't even say "Islamic"; it's always ISIL, ISIS, AQ, AQAP. We've spent billions and millions of dollars on this war and we're not even going to win it because the President can't even get the enemy's name out of had his mouth.

AINSLEY EARHARDT: The lens is so foggy here because you have Hollywood, you have Michael Moore, Seth Rogen saying all of that about an American hero. American Sniper is an awesome movie. If you haven't seen it, you need to go see it and support our troops. These are people that are fighting for our freedom so that Michael Moore can produce movies that he wants to produce.

JESSICA TARLOV: These are two completely different movies. One has a very serious message about America's role in the world, and also how we treat our troops and our vets. And the other, for many, is lighter fare. It is exploring an important lifestyle and I've read the books and I will see the movie, but it doesn't feel like they're really comparable in the same way.

WAYNE ROGERS: I disagree with all of this. I think "American Sniper" is a simple movie in the sense that it is a character study. I happen to know Clint Personally. I know you can't say, for example, which the picture that he made -- in fact, look at all of his pictures. You know, ideology is the enemy of truth, and for Michael Moore and those people to come out and print their ideology on "American Sniper", or for that matter any other picture, Hollywood is about making money; that's all they care about. They care about making money, and "Fifty Shades of grey" is about making money. It's not a statement; it's not anything else.

JONATHAN HOENIG: I've got to say if disagree with the whole premise here. Michael Moore and Seth Rogen don't speak for Hollywood, just like Bernie Madoff doesn't speak for Wall Street. The public loved "American Sniper". So did those Hollywood critics; they gave it 63% on rotten tomatoes and "Fifty Shades" is only getting about 35%. Yes, it's about sex. I happen to think that sex is good, sex is moral. So in a sexy movie I want to see some sexy scenes.

WAYNE ROGERS: It's beyond me. How can you get a tax refund if you have never paid a tax in the first place? I mean, by definition if it's a tax refund and you haven't paid the fax it the first place you can't get. This is idiotic. This is the federal government totally out of control again. All of those guys ought to go home. They ought to fire everybody and start all over. It's a bad law.

AINSLEY EARHARDT: It's ridiculous. To Wayne's point, he's right; by definition this is not a refund. Let's call it what it is. It's free money. It's not a refund. You can't get a refund if you've never put into the system. All of us have paid our taxes. I'm hoping for a refund this year because maybe I've paid too much in taxes. These are people who are going to get money back that haven't paid a dime.

JESSICA TARLOV: We also need to think about the people who have been paying taxes and the American government has been taking their money and that they should then be able to file for back credit. There are a lot of hard working people in this country who have been granted amnesty under President Obama's executive action who, I think, are due some money from what they've been paying to our government even when they haven't been given the rights and privileges of being Americans.

JONATHAN HOENIG: Sure, I think the GOP conservatives use tax fraud, Ebola and terrorism essentially as a red herring against immigration. The problem is not the immigrants. The problem is the entitlements and tax system. The earned income tax credit is essentially a subsidy for poor people with kids. It attracts moochers, both foreign and American. Even before this rule was passed 25% of the earned income tax credit was fraudulent. That's about $15 billion a year. My proposal is don't get rid of immigrants, get rid of redistribution.