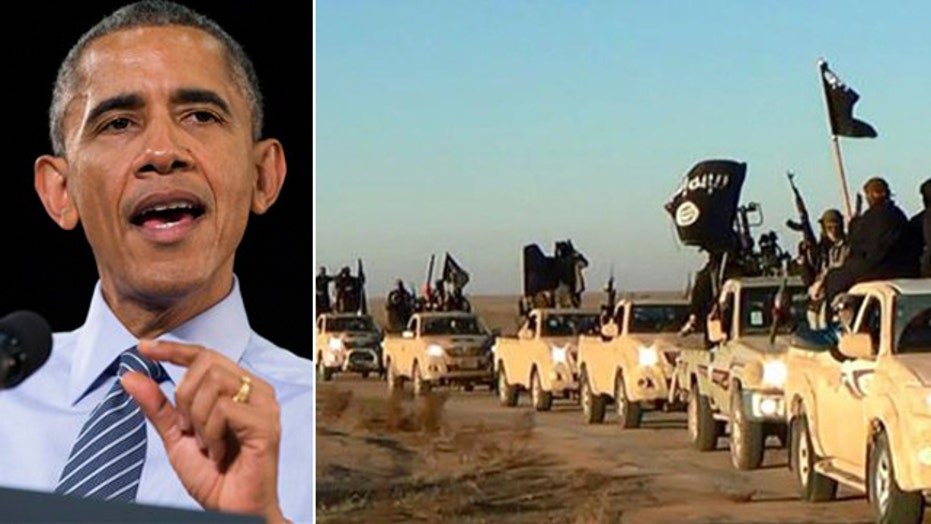 White House under fire over reluctance to call out 'Islamic extremists'

KIMBERLY GUILFOYLE: You're never going to hear this President say the words ‘radical Islam' or criticize that religion in any way. He's part of the PR team. He's essentially saying this is a religion of peace, but he has no problem casting dispersions against Christians, comparing to the Crusades, et cetera, and he's going to draw more equivalency there but will not face this terror threat head on. It's a huge problem. Everyone in the world, not just in America, sees it.

JONATHAN HOENIG: not just say it, but counter the radical Islamists' declaration of war against us. I saw that videotape, it is in my mind essentially the Islamist equivalent, the Islamist savage equivalent of the Nazi-era extermination camps; it is unspeakably evil. The fact that the President won't name the enemy-- it's not like this is a new enemy. Go back to '83 with the Beirut bombings, or '85 when they kicked a while in a wheelchair off the Achille Lauro, of course 9/11. Open your eyes, the terror threat is right in front of you, but Obama can't get the word ‘Islamist' is out of our mouth.

NOMIKI KONST: It's a little more complicated. We have a criminal justice system. What Obama is doing, we right now-we've talked about this several times-- is that people from the American community who are leaving America and going overseas to train with ISIS. We're not blocking them from coming back to the United States we do want to try them. That is the way it works in America. Just as King Abdullah is doing the same thing in Jordan. He is using his boarders to try it the way had he do it there. Everybody has their own system of government and we are a democracy.

JONATHAN HOENIG: Vaccines, immunizations in my opinion should never be forced, never be required by government even for the so-called ‘public good.' Think about where this could lead if government gets involved in science and medicine: forced sterilization, forced abortion, forced pills, forced treatments. Government's job is to protect you from infectious diseases. If someone has mumps and someone is contagious they should be forcibly quarantines by government because they are a risk to the public.

NOMIKI KONST: First thing, it pretty much is mandatory in all states. 48 out of 50 states, except Mississippi and West Virginia, have mandatory vaccinations for students who want to enter the public school system. There are some exemptions, and that is religious right, philosophical right and health issues. They should absolutely be mandatory because the problem here is there's the right of the individual and then there's the right of the public, and public health is the largest right. Your individual exclusion from this vaccination impedes on everybody else's right to be healthy.

KIMBERLY GUILFOYLE: Look, I think it's very important. I take children's health seriously. It should be a matter of utmost importance for public health. We already know that Measles, Mumps, Polio-- all these things we've been able to eradicate very successfully until now; we see them creeping back in because people are very adamant about their political ideology. The problem is it's affecting the health of children in this country, and that's where you draw the line. Homeschool your child if you will not comply with the rules.

KIMBERLY GUILFOYLE: Every time they say they want to help the poor the lower class and middle class end up getting pinched, and in a worse position. They get over-taxed, and now they're going to have to pay more for their gasoline. It's not making any sense. These are counterproductive. These are not good economic ideas whatsoever and it's unfair. It really is an injustice.

NOMIKI KONST: Congress decided not to fund the roads, and now we have to find a way of paying for that. The middle class, every day Americans, hate having to repair their cars because they keep getting flat tires on the roads.

JONATHAN HOENIG: The left's answer to bankrupt government-run programs is always more money. This is an especially destructive one, Eric. A tax is force; we've talked about it many times. It's not like when the president says ‘we're going to ask you to pay a little bit more.' They're forcing you to pay more, and the gas tax is specifically a tax on production. It's a tax on the ability to earn wealth and enjoy your life, whether you're driving to work or vacationing with your kids.