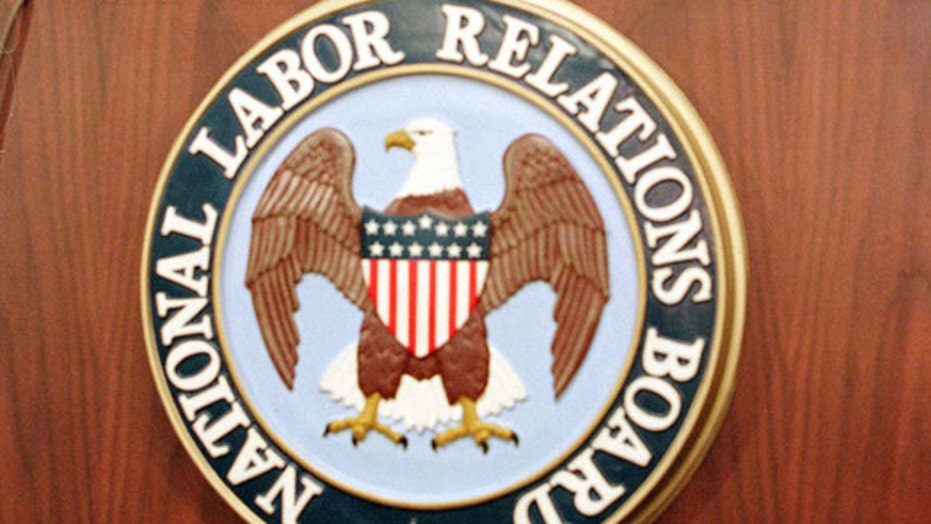 NLRB wants companies to give workers' info to unions

REPORT: NLRB WANTS TO REQUIRE COs TO GIVE WORKERS' NUMBERS, ADDRESSES TO UNIONS

BEN STEIN: If I were a worker at a factory somewhere I would not want the unions to have my home address and my phone number, calling me up, badgering me, possibly sending people to walk up and down my front lawn and looking at me menacingly as I'm pulling up weeds. I want my privacy. If they want to contact me, they can e-mail me or just the same as everybody else.

GARY KALTBAUM: This is the outcome of union membership that has dropped in half over the last 30 years. They are desperate. Here is the problem, this is going to continue, and you have an administration that's actually backing this. We have no privacy anymore. This is all about pressure and the votes in order to curry favor with the politicians going forward.

DAGEN MCDOWELL: There's a shorter time frame for an election to happen, from 38 days now ten to 21 days, and it doesn't give the company time to respond. These rules were passed by the NLRB a few years ago. The way the vote was done was shot down by a court. So this is their second shot at it. It will certainly help unionization in this country.

CHARLIE GASPARINO: The real issue is shortening the time frame, and making these shotgun weddings. Remember what happened with shotgun weddings. There is always buyer's remorse not giving people enough time to digest the differences between what the union can give you and what the company is offering.

JULIE ROGINSKY: If you don't want to join the union, then you don't join it. I'm a strong, private sector union person and I'll tell you why. Under the circumstances, we have a smaller middle class today than we did 50 years ago and that tends to decline the union.

DAGEN MCDOWELL: Some of this stuff people would be fired for. You're misusing travel expenses, but you're ex-IRS and you get a bonus even though you didn't pay your taxes. That is the richest, dumbest thing I have ever heard in my entire life.

CHARLIE GASPARINO: I think the irs is a necessary evil but they are evil. What they do is take money from the American people, who have earned that money, but it's necessary to pay the bills of this country. To think that they even get bonuses is, for this job, insane. That is really insane.

BEN STEIN: Well, I can tell you, as a long-time government employee before I entered the glorious world of Hollywood, it was fun. I mean, we did not consider that money to be taxpayers' money. We considered it to be our money. We can play games with it. We can give ourselves imaginary sick days. We can take off and not charge it against our sick days. That way it accumulated for when we left. We had an incredible amount of fun with the taxpayers' money. The government employees basically just think it's their money that god gave them to play with.

GARY KALTBAUM: This is a small microcosm of a huge problem. They don't care. It's not their money. It's an endless amount of bucks coming from the taxpayer. 15 years ago, the government spending was $1.8 trillion; it is going to be near $4 trillion this year. There's so much sloshing around, what do they care? They have nobody to answer to, no accountants, nobody looking over them.

JULIE ROGINSKY: It's a bigger issue than just IRS bonuses. When are bonuses ex-pecked? Aren't bonuses for jobs well done? There is this culture now that it's part of your salary.

GARY KALTBAUM: Well, again, there are rules for Washington D.C. and rules for the rest of us. It's always we're behind the 8 ball once again and all of this forgiveness, all it does is get more people wanting to be forgiven. We used to have contract laws on debt. It seems to not matter anymore.

BEN STEIN: My student loan debt was forgiven, but let me say this; an investment in college education is an investment that benefits the student. You shouldn't have the taxpayer paying taxes to support you. You should pay that yourself. Contract law is vital to a functioning society. We shouldn't throw it overboard.

DAGEN MCDOWELL: The bigger issue is that the government is encouraging people to go into debt to get an education. In fact, you should be encouraging the students to do a cost benefit analysis of will it going to benefit me to pay hundreds of thousands of dollars to get an undergraduate or graduate degree? They're working against the student.

CHARLIE GASPARINO: All of this targeted enforcement by the government and enticement to go into debt with student loans reminds me of what happens with the housing crisis. This could be the next housing crisis where we're going to have to bailout the lenders.