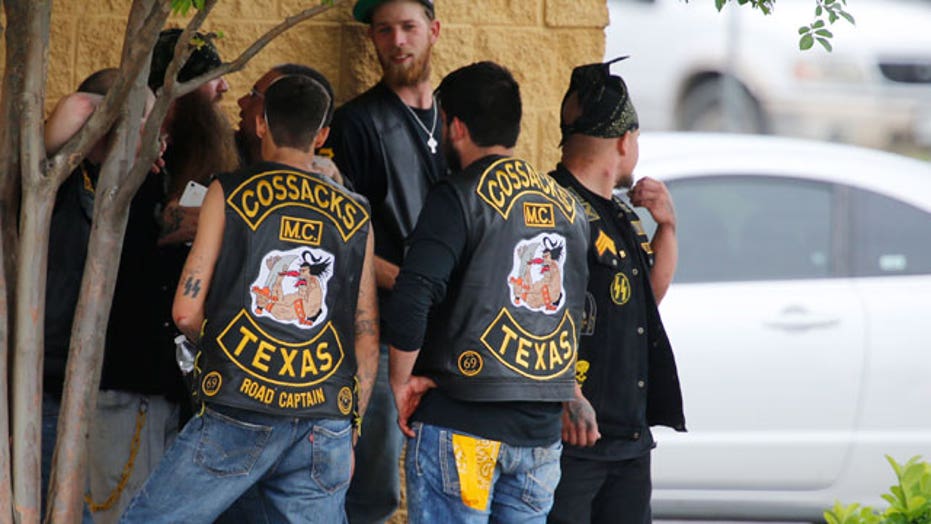 Nine killed and dozens arrested in deadly shootout in Waco

O'REILLY: "Unresolved Problem Segment tonight, motorcycle gang violence in Texas. We don't hear much about these guys with terrorism all over the place, but they do remain a problem in America. The FBI estimating there are about 300 outlaw motorcycle gangs nationwide with thousands of members. In Texas over the weekend, fighting broke out among five gangs, leaving nine dead, 17 more wounded.

Joining us now from Kansas City, Steve Cook, police detective in Independence, Missouri, who heads the Midwest Outlaw Motorcycle Gang Investigators Association. So what happened, first of all in, Waco Detective?

STEVE COOK, POLICE DETECTIVE: Well, Bill, you plain and simple, you have a couple of organizations, the Bandidos and the Cossacks. Bandidos have historically controlled the state of Texas and tried to put all the other gangs under their thumb. And I think the Cossacks have had enough of that and were not willing to continue to bend to their will.

O'REILLY: Ok. When you say controlled the state of Texas, control it how?

COOKE: Well, basically how these organizations operate, the Bandidos are a national organization -- all over the United States. And they like to control drug trafficking, motorcycle theft, different criminal aspects in a certain area. And in Texas they have always been the dominant motorcycle gang there.

So for a group like the Cossacks to basically step up to them a little bit and not want to follow any directives from them is an affront to them, which is going to lead to violence which it obviously has.

O'REILLY: All right. Now, is this a Mafia-type situation where there is a central authority that gets money from drug dealing? And I understand they're into extortion and a whole bunch of other things. Is it centralized or are these guys just there is a Waco branch, an Abilene branch. What is the organization like?

COOKE: Well, it's very much centralized. Houston, Texas is kind of the hub for the Bandidos as far as the mother chapter is concerned. A gentleman named Jeff Pike is the el presidente of the organization and he oversees the Bandido Nation as they refer to it. They do have national officers that help enforce the rules amongst the individual charters.

And, yes, the membership is engaged in a wide variety of criminal activity. Drug dealing, extortion, motorcycle theft, assaults and obviously murder. And, yes, the gang does benefit regardless of what they want.

COOK: Actually, the motorcycle gangs are worldwide. Motorcycle gangs are the only export of organized crime from the United States abroad and you know, groups like the Hells' Angels, the Bandidos, the Outlaws, Mongols -- just for example. They are all international organizations with charters virtually all over the world that all communicate back with their respective mother chapters in the United States.

O'REILLY: All right. So these are like cartels then. Now, do they sell drugs themselves on the streets like the inner city gangs do or do they farm that out and just import the drugs? How does that work?

COOK: Well a lot of times what they will do is they have what they refer to as support clubs. These are subordinate organizations, maybe individuals that aren't up to snuff to be a member of the main outlaw gang, but still want to be involved in the lifestyle. And they will have these individuals sell drugs for them. You will have individual members also participate in those activities and they will utilize their old ladies to do it, as well.

O'REILLY: Their old ladies being their girlfriends or wives I guess. So this is a serious problem. We don't hear much about it. We hear about the inner city drug gangs. We didn't hear much about the motorcycle gangs all over the place. I think the Waco incident took a lot of people by surprise -- Detective.

COOK: Yes. And I would agree with that. And it is a major situation all across the country if not the world. But the problem is a lot of times especially law enforcement agencies, they get so focused on the street gangs and other things that these guys kind of get put on the back burner and then something like this happens and everybody remembers again why they are a problem.

O'REILLY: Yes, this isn't good for business as the Mafia chieftains would say because now the spotlight is on these gangs and they are selling methamphetamine and cocaine and hard drugs as well as marijuana. All right. Detective, we appreciate your time tonight -- thank you.