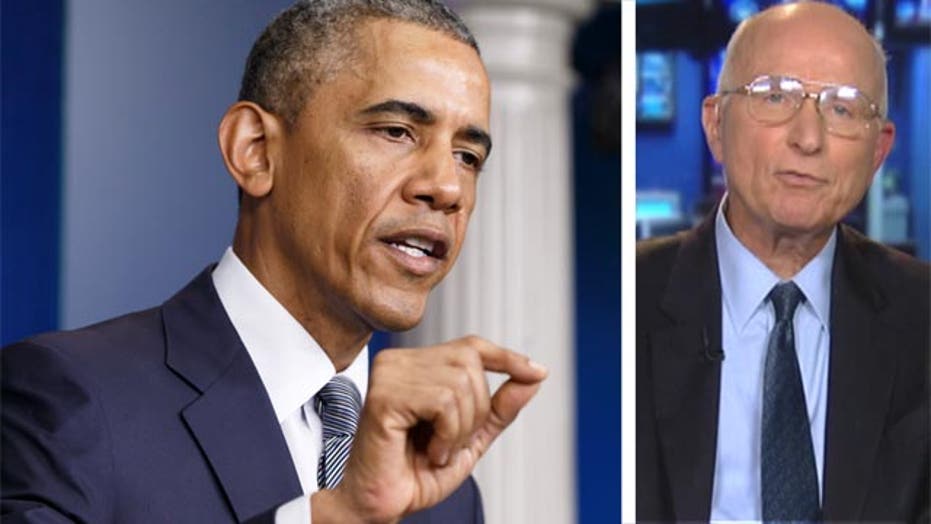 This is a rush transcript from "The Kelly File," July 18, 2014. This copy may not be in its final form and may be updated.

MEGYN KELLY, HOST: Our next guest thinks that the President is doing exactly the right thing when it comes to Russia.

Larry Korb is a senior fellow at the Center for American Progress and a former assistant secretary of defense in the Reagan administration. Larry, good to see you again. So, where's the general, where's Marc going wrong?

LARRY KORB, FORMER ASSISTANT SECRETARY OF DEFENSE: Well, I think, for example, Marc mentioned, you know, President Reagan and how forceful he was. The very interesting thing is after the shoot-down of the Korean airliner in 1983 with 61 Americans including a congressman die, Reagan said, and these were his exact words, "We have to respond in a calm, controlled but firm manner." And his spokesman said this is not just the United States and the Soviet Union, the United States and the world. And what happened when he didn't do anything, he used some harsh words four days after he spoke to the American people, not right away like Obama has, he used his harsh words but didn't do anything. He kept negotiating with the Russians.

KELLY: President Reagan was on vacation when he got that news. He came back from vacation and he made an address. He had several meetings with his top Cabinet officials and then gave an address.

KORB: Four days. And he used these tough words, savagery, monstrous, murderers and then didn't do anything. George Will, one of your commentators --

KORB: Well, obviously as U.N. ambassador had this cleared with the White House when she said this.

KELLY: Why won't he say it? Why does Samantha Power have to say it?

KELLY: No, he didn't say Russia did it. We played the sound bite.

KORB: He said Russia has sent this equipment in here. And he talked about the fact that they shot down other planes.

KELLY: He was equivocating talking about the Russians and the Ukrainians and those pro-Russian Ukrainians and so on. Samantha Power was so much more forceful and was explicit that the administration, she at least, believed that Russia did it and Russia can end this. You heard.

Now, that's our White House reporter Ed Henry. These are the facts, Larry. The question is why? Why wouldn't our commander in chief be as direct as the U.N. ambassador? Is there some messaging problem? Is he failing to confront the giant, Putin?

KORB: No. Obama's -- first of all, he's put very strict sanctions on and he wants to get the Europeans to join in there. So you don't want to get too far out in front of them.

But, you know, it's interesting with the U.N. Ambassador Jeane Kirkpatrick was always more forceful than Reagan, Adlai Stevenson during the Cuban missile crisis, he was much more --

KELLY: OK. That's great. I would ask them about that back then, but I was only 12.

So now I'm much older. And I've got you sitting here. And I want to know why. Explain it to me. Because it seems to me if I'm the commander-in-chief, I'm feeling pretty good about my microphone, my power and a lot of responsibility in my role to the American people. And if my administration believes that Vladimir Putin did this, then I'm going to say Vladimir Putin did it. Or if I have some strategic reason for not doing that, I'm not going to send my U.N. ambassador to go out there and say that while I'm not comfortable saying it myself.

KORB: No, she said there's no -- it seems to be that there's no other explanation. But the fact of the matter is that if the president says something and it turns out not to be true -- we know Putin's at fault. He gave the equipment. But we don't know why they shot it down. They may have, you know, thought it was another plane. Just like we did when we shot down an Iranian airliner. So, you don't know that. You've got to be very, very careful before you do that.

But the way to deal with this is not militarily. It's economically. And that's the sanctions we put on. And Putin was upset about the sanctions that Obama put on two days ago and called him to talk about it.

KELLY: That's what they were talking about that morning when he then said --

KELLY: Before I let you go, quick question, do you believe the president should have gone to those fundraisers last night?

KORB: Well, I don't like any politicians going to fundraisers. I think there's too much of that. But he was certainly kept aware of what was going on.

KELLY: OK. But that doesn't answer my question. Should he have done that? Three hundred dead civilians?

KORB: Well, no, again, I would not have gone to a fundraiser, no, I think they should have sent somebody else. Maybe his U.N. ambassador to the fundraiser.

KELLY: Yes. All right. Larry, good to see you.