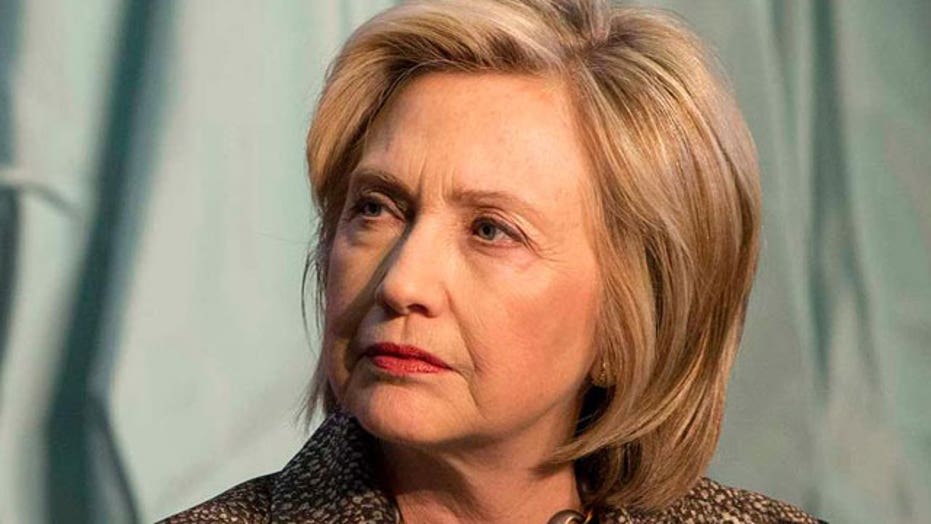 Why Hillary Clinton is dodging reporters on 'The Kelly File'

This is a rush transcript from "The Kelly File," May 15, 2015. This copy may not be in its final form and may be updated.

MEGYN KELLY, HOST: Good evening, everyone, and welcome to a "Kelly File" special, "What is ailing America?" I'm Megyn Kelly.

With the 2016 race for the White House getting under way, we are hearing more and more about what's wrong in America and in need of being fixed. From the economy and jobs, to race relations and poverty, from distrust of some media, to disgust with some political leaders. Tonight we take it all on, and we start with a remarkable story shaping up right now tonight on the campaign trail. It is now been almost five weeks since Hillary Clinton declared that she is running for president, and she has yet to do a single major media interview. How many times have we had to say it?

She's not answered questions about her e-mail scandal, that plot thickens tonight, I have that for you in moments, her charitable foundation, her support for the Iraq war, her record as secretary of state, and tonight we add something new, there is breaking news that Hillary and Bill Clinton have earned a combined $25 million in just the last year, but giving roughly 100 speeches, that's a lot of money per speech. And another $5 million for Mrs. Clinton's book. Thirty million at least from a candidate who is complaining about income inequality. The -- reporter asked her about that. And so far she is wildly unavailable to answer any questions about any of it.

Trace Gallagher has put together the developing details on the "Clinton Cash" windfall, he's got that for us now. Trace?

TRACE GALLAGHER, FOX NEWS CORRESPONDENT: Megyn, we just got Hillary Clinton disclosure form 15 minutes ago and are now kind of scanning the Clinton's various assets, we know that Hillary Clinton commands up to $200,000 per speech, Bill Clinton up to $700,000, and we have confirmed that from those 100 speeches you talked about, the Clintons took in $25 million over just the past 16 months. Add the $25 million to the $5 million that Hillary Clinton made in her book "Hard Choices" and the Clintons already make more than 99.9 percent of the population. The Clintons also listed the number of security investments and life insurance policies worth millions more.

Now, remember, Hillary Clinton does not have to disclose personal assets like homes, cars, or federal retirement plans, and other assets in stocks and companies only have to be disclosed within a broad range, not specific numbers. Experts say the disclosure forms are intended to guard against conflicts of interest or potential conflicts. They are not meant to establish a candidate's net worth. Although, the Clintons wealth will certainly come up in the campaign, considering she is positioning herself as a champion for the struggling middle class. The Clintons are clearly moving up the financial ladder, as well. In her last disclosure before she left the State Department, Hillary Clinton declared that she and her husband had made at least $16.7 million in 2012, that, of course, was before she hit the speaking circuit.

The Clintons' effective federal tax rate in 2014 was 30 percent, that tax information, by the way, is not part of the financial disclosure form, but the Clintons are clearly trying to get the information out there as a way of pointing out that they pay taxes on earned income, not invested income, though the Clintons have been criticized for giving highly paid speeches for key players in the financial industry, Hillary Clinton, by the way, claims they were dead broke when they left the White House in 2001, the same year they made roughly $12 million -- Megyn.

In poll after poll, when Americans are asked what ails America, their number one complaint is dissatisfaction with government and this Clinton controversy captures some of that. As she continues to dodge the media week after week, the poll show a growing number of voters think she is dishonest. And remember, as we get these reports about her income, Mitt Romney talked with reporters all the time and he was still repeatedly hammered on the tiniest of his financial details.

UNIDENTIFIED MAN: Miss Cotter (ph) suggested you might be guilty of a felony, Governor Romney, what is your response to that?

UNIDENTIFIED MAN: When are you going to release more of your taxes and how many years?

CHRIS STIREWALT, FOX NEWS DIGITAL POLITICS EDITOR: He didn't. And that interview he looked like he'd rather be taking a beating from Evander Holyfield than sitting there and talking about that, but he did it, just like Jeb Bush stood out in the hallway in Reno, Nevada, and let people pelt him with stones.

KELLY: Sat with me for a lengthy interview, took every question I gave him, even though he was at risk to himself.

STIREWALT: Yes. I think I heard something about that one. In fact, the reality is, for politicians, of course they don't want to answer questions, of course they don't want to be obliging and Hillary Clinton has demonstrated that she's pioneering a new way to run for president, or maybe it's a really old way to run for president, which is you don't run at all, you stand for office. You clear the way, you have wealthy friends, you have influential people, you have control of a party apparatus that is tightly held and you don't even run. You just stand and you say, I'm here, and I am prepared to be your president and you just make sure nobody gets in your way. And that's not exactly progressive.

KELLY: It's not just wealthy friends, obviously, the Clintons have a lot of dough, and it averages out to about $250,000 a speech, these speeches, you know, 20 minutes long, some of them. So, must have been a hell of a speech, must be like a real --

KELLY: Here we go! And then I met a young intern -- seriously, like what could he possibly be talking about that is worth in some cases $500,000? I realize he was president of the United States, but what I've been told he likes to talk about his charitable foundation, which I'm sure is wonderful. But I don't know if I'd pay him half a million dollars to talk about that for half an hour. The question I have for you, however is you have a piece today that talks about how you reap what you sow, press corps, and what we're looking at right now with Hillary's campaign is the Obama White House press strategy on steroids. Explain that.

STIREWALT: That's right. Because what Hillary Clinton has done is, if you can't beat them, hire them. So, she has hired to her all of the people, a lot of the people who helped defeat her in 2008 and their strategy, which is don't answer questions, don't have actual interactions with people, do YouTube videos, do over the heads of the press, don't interact and just put this sort of canned goods out there. I called it spam, where you just push it out there and say this is what it is, and when reporters say, we want to talk to you, we want this, say I'm talking to the lady that eats the fruit loops in the bathtub, and I'm not talking to you and that's what you do.

And Hillary Clinton is taking it to the next logical steps. She just as politicians always do, the first one makes it bad, the next one makes it worse. Hillary Clinton is giving the press what they asked for, which is by not getting up on their hind legs and barking loudly about Barack Obama shutting them out, lying to them on some occasions, and generally disrespecting them. Now they find themselves without the ability to apply any leverage to Hillary Clinton and she's given them a big --

KELLY: I like that, right. If I ever get to interview her, I hope she begins the interview that way. And I'm rubber, you're glue.

KELLY: I'll work on it before the interview. So she sees a proven media strategy and she pursues it. I'm not going to say anything, I don't care, I'm not answering your questions.

KELLY: But more and more questions continue to arise and eventually, eventually she will sit with somebody, she will. And just tonight we had more questions raised about her e-mails, do we have the sound bites asking my -- okay, listen to this, the former deputy head of the CIA came out, he spoke with Hugh Hewitt today, Mike Morell, and talked about the likelihood of Mrs. Clinton's e-mail server being hacked and accessed by foreign governments. Listen.

HUGH HEWITT, TALK SHOW HOST: As a professional matter, do you believe that at least one or perhaps many foreign intelligence servers, services, have everything that went to and from that server?

MIKE MORELL, FORMER CIA DEPUTY DIRECTOR: So, I think that foreign intelligence services, the good ones, have everything on any unclassified network that the government use, whether it's a private server or a public one. They are that good.

HEWITT: So that's a yes.

KELLY: And his counterpart over at the Defense Intelligence Agency, the Lieutenant General Michael Flynn, told me about a month and a half ago he also believes that the Chinese at least and others have likely hacked into that server. So, somebody is going to have to ask her about that at some point.

STIREWALT: And if you're covering Hillary Clinton and you're not putting it all through the prism of this, you're doing it wrong. Until she answers the questions, she doesn't deserve coverage on whatever narrative gobbledygook that she and every other politician would like to put out every day, she has to answer things about what matters first before she gets to put her spin out.

STIREWALT: You got it.

KELLY: -- which you outlined very nicely. It's great to see you, Mr. Stirewalt.

KELLY: Just wanted to try it out, that's kind of fun, it's Friday night.