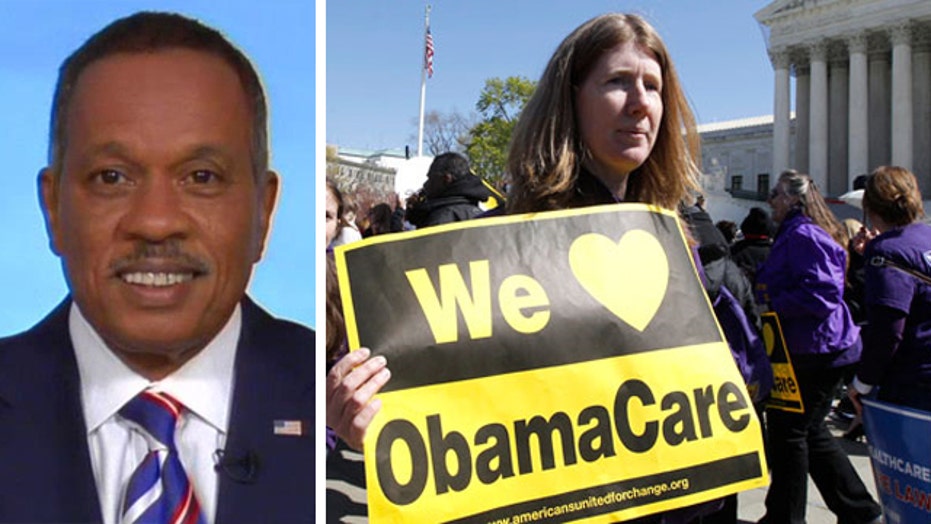 Juan Williams: Americans should be 'thankful for ObamaCare'

JUAN WILLIAMS: AMERICANS SHOULD BE 'THANKFUL FOR OBAMACARE'

JUAN WILLIAMS: Yeah, I'm serious. My gosh, Eric, 25 percent fewer Americans without insurance. 70 percent Of the people who have affordable care insurance say they're pleased or consider it excellent. That's an amazing triumph for our country.

WAYNE ROGERS: Well, you know, Eric, we just are beginning in this thing. Half of it hasn't even been implemented yet. When you get around to implementing some of the other stuff that goes on God knows what other lies are going to come out. I mean, you know, you can keep your doctor. You can, if you like your policy, keep your policy; all of that kind of stuff. There are over 2,000 pages in this thing and we haven't implemented half of it and when it comes out it's going to be much, much worse. It's going to be a killer.

MICHELLE FIELDS: I agree. Why should the American people feel great and be thankful for the fact they lost their doctor, that their rates are going up, that their network is smaller now? If you look at the most popular plan right now, the silver plan on the ObamaCare exchange, people with that plan will see rates go up 10 percent in 2015 for the exact plan they have now. Why should Americans feel thankful for that, Juan? I think Juan has completely lost touch with reality, officially.

MICHELLE FIELDS: Well, first and foremost, a man who doesn't understand the importance of Keystone Pipeline, not my type. I like a man with a brain. This is a typical liberal: "do as i say, not as I do." They want to drive around in their SUVs and be in their yachts and jets, but they want the rest of us to ride on bikes to work. They're a bunch of hypocrites.

WAYNE ROGERS: I don't know Seth MacFarlane and I don't know what he was thinking about. My good friend Alan Alda, for example, had an electric car over 15 years ago before it was popular for everybody to get into this. So my experience has been that most of the people I know are in favor of the Pipeline because it's going to create jobs and if you don't do it here, it's going to go through Canada and the Chinese are going to get it. It's crazy. It's nuts. Because nobody really analyzes it, just talks about it as an environmental thing and don't realize what they're saying.

JUAN WILLIAMS: But first of all, we're missing the news here. Seth MacFarlane has good taste. He's interested in Michelle!

JONATHAN HOENIG: All of these Hollywood elitists, Eric, are educated in our schools, which taught them multiculturalism, to hate America. And taught them environmentalism, to hate mankind. Michelle makes the point. If you are so against use of the earth, you want to reduce your environmental footprint, stop using so much gas. Your life will be worse because of it. The more energy we've used the better man's life has become. The environmentalists are against man that's why they're against this.

JONATHAN HOENIG: How about government starts thinking with its head and stops thinking with its heart? All these massive government redistributions come from appeal to emotion. We've got to do something. ObamaCare, welfare, help for Homeowners, et cetera. Government should be encouraging rational self-interest and if you want help to poor, help them. I would quote my favorite reverend: Reverend Ike, who said the best way to help the poor is not to be one of them.

MICHELLE FIELDS: My wish is to simplify the tax code. I think we should lower taxes for everyone-especially the corporate tax, because it puts a lot of our businesses at a competitive disadvantage, so I think that's what we should do. We'd get a lot of businesses back, and a lot of jobs.

JUAN WILLIAMS: I think that we need to do away with the union monopoly on public education. We need more school choice, more power to parents. We need to get better schools for those kids, and stop with the payoffs to the big unions, and the union contracts and regulations that interfere with education.

WAYNE ROGERS: You know everybody talks about how Congress does nothing, and people in Washington do nothing. I think that's a wonderful idea. Tell them all to do nothing. Nobody does anything, they don't pass any laws, they don't get in each other's way, they don't spend the public's money and they all go home. That's what we need.