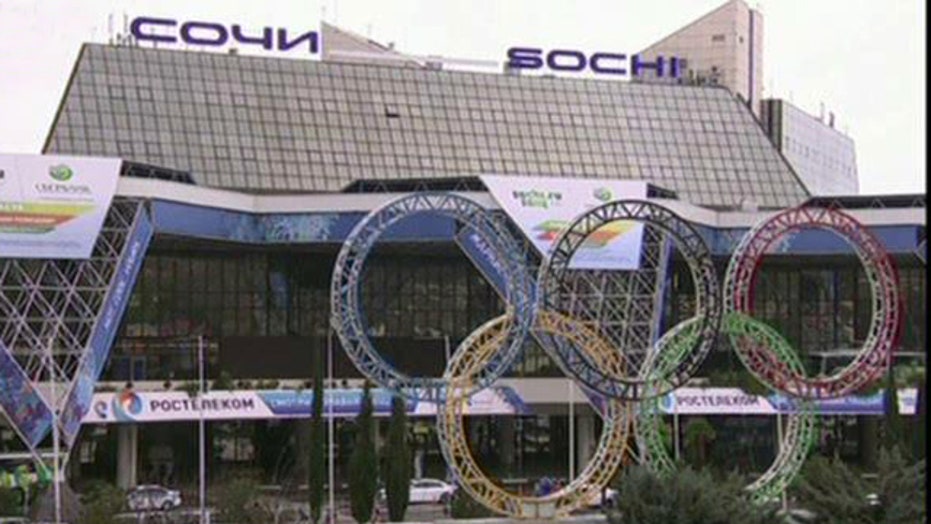 Is Sochi ready for the Olympics?

This is a rush transcript from "Hannity," February 6, 2014. This copy may not be in its final form and may be updated.

HANNITY: And welcome back to "Hannity." Competition at the Winter Olympic Games in Sochi, Russia, has already begun prior to tomorrow's opening ceremony due to the addition of these new events. But yesterday, the U.S. Department of Homeland Security warned airlines that terrorists may try and smuggle explosives on Russian-bound planes using tubes of toothpaste. Now, growing fears of an attack are just the latest in a long line of issues now facing these games, including poorly prepared accommodations and athlete's concerns over their safety.

Here with reaction to discuss the distressing news only hours before this open ceremony, former U.K. defense ministry adviser and Vocative's editor-at-large Michael Kay, and sportscaster, Fox News contributor, our friend, Jim Gray, is back.

All right, Michael, let's talk first of all about toothpaste tubes. We heard originally that there might be this black window jihadist that had already got into the games. That's a big concern, and apparently, the athletes and their families are not leaving the grounds where they're staying. They're afraid.

MICHAEL KAY, FMR. ADVISER TO U.K. MINISTRY OF DEFENSE: I think if we put this into context, Sean, for me, the big threat is the black widows and the threat that they really pose on being able to disrupt the games.

The toothpaste piece and the information that came out yesterday, I think is important, but it's not really new to us, is it. Since 9/11, you know, we've all had the issues of going through airport security with too much liquids. If you look at the Super Bowl security, they wouldn't allow more than 3.4 ounces of a certain liquid inside the MetLife stadium. So you know, I think we've got to be not really too surprised by this sort of new information on the toothpaste --

HANNITY: Look, I think jihadists are still at war with the rest of the world, especially the free world. Jim, let me go to you. I guess one of the reasons, one has to question, the selection of Sochi -- first of all, it's a tropical climate. Why do you have the winter Olympics in a tropical climate? A little bizarre. And the proximity, obviously, to conflict -- was that taken into account? It seems like it was not.

JIM GRAY, FOX CONTRIBUTOR: Well, Sean, there are cities that bid on this, and the selection process begins about eight or nine years before the Olympics are there. That's when all of these cities start preparing, then they're picked six to seven years out. If you look back to 1984, only two cities bid on the Olympic Games. One was here in Los Angeles, which was awarded. But the other one was Tehran, Iran, and that was before the revolution. So things change on this global basis. Things just are so altered on a daily basis that they're really don't know. Sochi and Russia has been wanting to have an Olympics since Moscow back in 1980, when the U.S. boycotted. So...

HANNITY: It's a tropical climate, Jim, and this is a winter Olympics!

GRAY: Well, they have the mountains and they have the snow, and believe it or not, unlike the Super Bowl in New York, where we talked about the weather for a year-and-a-half...

GRAY: ... they've talked about the weather there, and they have plenty of natural snow.

HANNITY: They also have palm trees, which is a little ironic. But all right, let's take a look at some of the conditions. This has been tweeted out by athletes and their families. For example, you have this one toilet bowl where it literally says, Throw the paper here, don't flush it down the toilet.

Then we've got pictures of dirty water that has been tweeted out by a number of the athletes, as well. I mean, that is really disgusting. On top of that, you've got unfinished hotel rooms and a lack of accommodations for the athletes, for their families. And on top of that, there's been written stories now about the fear of people even going out beyond the Olympic village, you know, just to do -- the only people out there are Russians, apparently.

KAY: Yeah, and you know, I mean, we've got to put this all into context. I mean, the point that you made in terms of the selection of Sochi is a really interesting one, actually, Sean, because the other two where Pyeongchang in Korea and Salzburg in Austria.

However, what I would say is that the selection was made in 2007, in July. Umarov, who's the chap that's basically declared the North Caucasus region as a Caucasian emirate in terms of the jihadist piece, he made that decision in 2007 in December, six months after the decision was made.

So for me, I think that -- you know, as Jim rightly said, actually, the selection of the area -- the global threat landscape has changed considerably since that selection was actually made. So I think in terms of what we're seeing about the -- you know, the hotels not being prepared, about, you know, some of the water being fairly sort of dodgy --

HANNITY: Sort of dodgy? I mean, it looked like rust or urine, for crying out loud.

KAY: But Sean, we always see this. I mean, look at the London Olympics --

HANNITY: Put the water back up on the screen. Look at -- look at -- this is the water that our athletes were supposed to drink! They're athletes, for crying out loud! It looks like urine to me!

KAY: I don't know about you, but I don't even drink water in the United States. I always go for Evian. But the point is, did you see East London --

KAY: It's a point well made. If you looked at East London three weeks before the London Olympics started, it was a building site.

KAY: And when we had all these discussions, was London ready...

HANNITY: Jim, last question. When Shaun White pulls out of one of the events that he has for fear of his safety, was the comment that he made -- now, he's a pretty, you know, bold, brave, dynamic snowboarder -- that took me by surprise a little bit. What was your reaction to that?

GRAY: ... is because of the way the course was built.

HANNITY: The course was built. He thought it was too dangerous.

HANNITY: And he thought it would take away his chance of winning, recapturing the gold in the event that he won the last two years -- last two Olympics.

GRAY: That's correct, but this is a new event. He pulled out of a new event, which is brand-new at these Olympics. And a lot of people are criticizing him today for saying they didn't feel that he thought that he could win. That's why he's pulling out. He also hurt his wrist in a preliminary event coming up. He's going to participate in the event that he has won twice before in the Olympics, so he will still stay in that. But the security issue wasn't the reason why, but they thought that the course was too dangerous.

Of course, if you look back in Vancouver, they thought that the course was too dangerous on the bobsled and the luge, and unfortunately, very unfortunately, an athlete died there.

HANNITY: All right, guys, thanks for being with us. Appreciate it.

KAY: Sure, Sean. Thanks.

HANNITY: Coming up next...