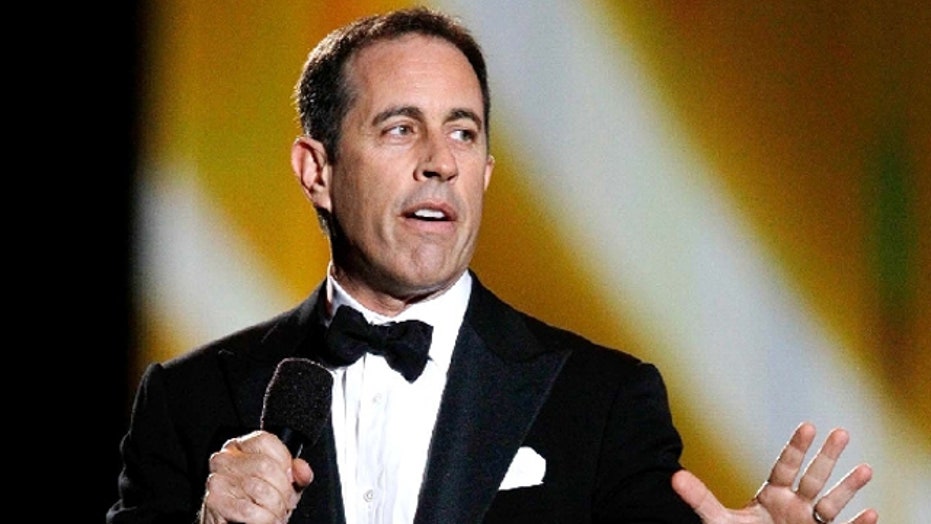 Is Seinfeld right about the evolution of parenting?

Comedian sounds off on new way of raising children

This is a rush transcript from "Hannity," February 20, 2014. This copy may not be in its final form and may be updated.

ANDREA TANTAROS, GUEST HOST: Comedian Jerry Seinfeld appeared on "The Tonight Show with Jimmy Fallon" on Tuesday. And in addition to his hilarious stand-up routine, he also had a few interesting words about the evolution of parenting and the elaborate bedtime routine children have today. Take a look.

JERRY SEINFELD, COMEDIAN: I am not a great believer in our style of parenting. What I mean is our generation, you, me, anybody that has kids now, I just think we're too into it.

JIMMY FALLON, HOST, "THE TONIGHT SHOW": What do you mean?

SEINFELD: We're too into this thing. I don't know how we got so into it. When we were kids our parents didn't give a damn about us.

SEINFELD: They didn't even know our names.

The bedtime routine for my kids is like this royal coronation, jubilee centennial of rinsing and plaque and dental appliances and a stuffed animal semi-circle of emotional support.

SEINFELD: And I have to read eight different moron books.

TANTAROS: So is Jerry onto something? Joining me now with their expertise are clinical psychologist and co-host of "Fatal Vows" and "Investigation Discovery," Dr. Brian Russell, and psychotherapist and contributor for BabyCenter.com Dr. Robi Ludwig.

All right, Dr. Ludwig, I'm going to start with you. How did this happen, because you know Jerry Seinfeld is right?

DR. ROBI LUDWIG, PSYCHOTHERAPIST: Absolutely. And Jerry, what he is talking about is so in sync with what Baby Center found amongst the millennial moms, that there is a real backlash against these helicopter parenting strategies, and they don't want to parent like that anymore. So certainly there is a generation of moms who waited a long time before they had kids. They're working many hours. So due to guilt or just falling in love with motherhood, they're creating this whole ritual.

TANTAROS: But why are women behaving this way? Why are dads behaving this way? Is it the Internet? Because my parents were not like that? I see the younger generations, they seem to be the helicopter, these kids on bikes, they look like the Michelin man. They have so much padding. Who cares if they fall.

LUDWIG: When he said my parents didn't even know my name. My father would go through all of my siblings before he got to my name. I think in part it is because of the research out there. We want our kids to be happy and healthy. And so we have raised entitled kids by giving them so much attention and making it so child-focused. But the backlash is happening amongst millennial mothers who really are saying I was the result of the helicopter parenting, and maybe it is not all it is cracked up to be.

TANTAROS: Dr. Russell, she used the key phrase there. They're growing up to be entitled. And it reminds me of the millennial generation, pajama boy, this generation of wussies. So is that what we're getting because of this obsessive parenting?

Then came the baby boomers, and they profited and built greatly upon that foundation, except at some point they decided they had been too pressured. So they started parenting with empathy, self-esteem, unconditional support, other people's responsibility, friendship with the kids.

TANTAROS: Everyone gets a trophy.

RUSSELL: That is not how you get not just this overly bedtime Mother Goosy stuff, but it's also how you get millions of Americans who don't mind spending twice as much as they earn, both as individuals and as a country. It all starts at home.

TANTAROS: So you're saying the message that we've got your back, we're right there, we are coddling you, it transitions into later in life when these kids rack up the credit card debt and their parents have to bail them out. So you're saying it's lead to a lot of other problems, culturally.

RUSSELL: Parenting is a dance where the parent leads in the beginning, then there is some give and take. And then by the end hopefully if everything goes right the kid is able to lead. An adult American needs to put himself to bed, go to sleep, and wake up ready to work the next morning. So by the time kids are Seinfeld's kids' ages, yes, they ought to be expected to show some ability to do that without a bunch of parental coercion or coaxing.

LUDWIG: I was going to say, you certainly want your kids to feel liked and loved. But if you don't prepare them for the real world where things aren't always going to be your way and you're not always going to be the center of attention, they grow up being really miserable and depressed human beings because they are not prepared for the realities of life. And that is why parenting is so cyclical, and they say my parents would want everything would revolve around me and now I'm miserable, they want to try something different for their kids so that they raise their kids with a new sense of reality.

TANTAROS: I mean, Dr. Robi, I have to tell you, not all millennials, but I have worked with some, and it is amazing how sheltered and how babied they are. One complained she wasn't getting enough sunlight so she needed to move her cubicle. The other one said I need to go to the gym in the middle of the day. I never would have thought of making these demands. And I'm just on the cusp, I could be considered a millennial. You said there is actually backlash among these moms, so are parents now pulling back and giving their kids a little more freedom?

LUDWIG: I think so. They're saying, I was the result of a helicopter mom, and I'm not so happy with the way the world worked out. The world does not revolve around me and I don't want my child necessarily thinking everything is going to be easy because life is not easy. And in order to be successful in the world, you have to be prepared for reality. You have to believe in yourself. But you have to know things are not always going to go your way and how to strategize in spite of that.

Dr. Russell, final question to you -- is it because we lost the sense of community? This segment made me think back. My mom would let me go play with friends. She never really checked in that much because the neighborhood was a community. Now everyone is texting and possessive and people don't go over to each other's houses like they used to. Final thoughts on where it stands today.

RUSSELL: One of the downsides with all the technology we have today, which has many wonderful applications, is I think we have had less of an actual human connection in recent years. And part of what that causes is it causes people to see themselves less as part of something larger than themselves. And you have to see yourself as that to be happy, healthy, successful in the long-term. It promotes an extreme sort of self-focus that gets us into this dopey area of this kind of parenting rituals around bedtime that Seinfeld was talking about.

TANTAROS: All right, thank you Dr. Russell and Dr. Robi. Thanks very much.