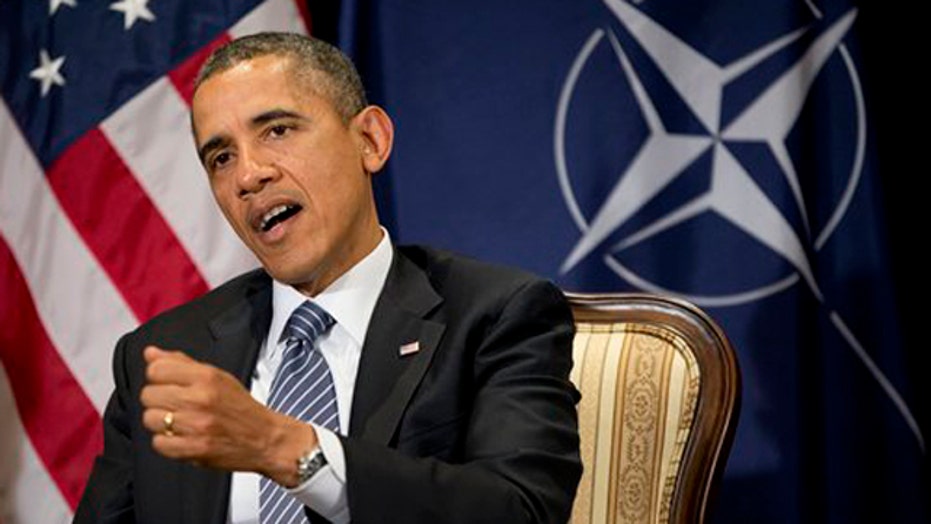 Is Obama tough enough on Russia?

George Will discusses the president's stance on Putin

This is a rush transcript from "Hannity," March 26, 2014. This copy may not be in its final form and may be updated.

SEAN HANNITY, HOST: Today President Obama continued his European trip, attempting to talk tough about Russia just a few short weeks after being embarrassed by Vladimir Putin and Crimea. But our very own Charles Krauthammer, he wasn't fooled by the facade. Here's what he said.

HANNITY: And here now with his take is the author of a brand new book -- I love baseball, he knows baseball as well as anybody -- "A Nice Little Place on the North Side, Wrigley Field at One Hundred." And that means he has a lot of patience, the patience of Job, Fox News contributor George Will. Good to see you in New York. How are you?

HANNITY: Let me start with what Charles is saying there and the president and his actions. More broadly, beyond Crimea, Vladimir Putin, but Syria, Egypt, the Arab spring, how would you assess this foreign policy?

WILL: They really believe the world changed when we turned into the 21st century. They didn't notice the first thing that happened in the 21st century was an act of war against the United States in downtown Manhattan and at the Pentagon. They really think that war somehow is out of date. War is the great human constant. Western literature begins with Homer. It's all about war, and it's been war ever since, and it won't change.

HANNITY: Do you think he has ambitions beyond Crimea, maybe the Ukraine, maybe Estonia? Does he envision putting the band back together and the old Soviet Union coming back into existence?

WILL: Absolutely. He's not Hitler, but he's read Hitler's playbook. Two days before the Munich conference Hitler gave a speech in 1938 September saying there are 10 million ethnic Germans, German speakers, living outside the borders of the Reich in the Sudetenland, in Czechoslovakia and in Poland. He said, "It is intolerable for me to accept this. I would be unworthy to lead the German people." I think Putin feels exactly the same way. If he can't bring them home to mother Russia, he's going to move Russia's borders out to get them.

HANNITY: Before we get to baseball which is one of my other favorite topics, let me ask you about yet another delay. What does the latest delay in ObamaCare four years into this -- how often do you have a midterm election in 2010 and then a midterm election four years later, it's the same topic that is going to drive people to the polls on the very same issue? It doesn't happen. You talk about peace and prosperity driving elections. Obamacare for two elections?

WILL: Obama is -- this is Obama at the improv. That suggests comedy, and this is a comedy, but it's not funny because he is traducing fundamental constitutional values and the separation of powers by assuming to himself the right to exclude Congress in the writing of statutes and in the rewriting of statutes. It's not permitted, and at the end of the day Congress has to stand up, assert itself, and stop it.

HANNITY: Is Jonathan Turley right? Are we at a constitutional tipping point?

WILL: I think so. Remember, this country was founded, Sean, in reaction against executive power, that of George III. It's been a constant theme of American life, trying to contain the president, who will expand whenever he can.

HANNITY: OK. Over the years I've had many opportunities to get to know you, interview you. You're -- beyond your level of politics you have a passion, a love for baseball. And you wrote this book about Wrigley field at 100. Your beloved Cubs, are they going to win a World Series this year?

HANNITY: I'm looking for my Yankees to win this year.

HANNITY: Hard to be a Cubs fan, then?

WILL: It's part of the fascination. Two things, the chemistry of loyalty that makes us loyal not just to the team but to the ballpark, to the radio announcer, to the team logo and colors. It's irrational, and that is part of fun of it.

HANNITY: Does it bother you that the Yankees, for example, went out and paid for Tanaka this year, Ellsbury this year, Carlos Beltran this year? Is that just part of the free market or does it frustrate you that they can buy a successful team?

WILL: Well, you can't buy a successful team reliably.

HANNITY: Not reliably, but --

WILL: They had the biggest payroll last year and they watched the postseason at home. Get who played in post season? Tampa, Cincinnati, Pittsburgh, Oakland, small market teams but very intelligently-run teams. Baseball has done a wonderful thing to improve competitive balance, partly by evening out the revenues with revenue sharing, and it just turns out money alone is not enough. It's like in politics. You can throw money at the wall and some will stick. If you throw money at problems you'll solve some, but not all of them. You have to have intelligence at the end of the day.

HANNITY: Let me ask you this question. Putting aside steroids, anabolic steroids, what about something like human growth hormone, which we know aids in healing. These players have short periods of their life where they are eligible to play at a professional level. If it can aid and help in healing, modern medicine make that's possible, should that be allowed to be used specifically?

WILL: I don't think so. There is no test yet for human growth hormones, although Major League Baseball is helping fund a study that will get that. It was human growth hormone -- probably, we don't know for sure -- that caused Barry Bonds' in his late 30s cap size to change.

HANNITY: Don't you think it was more testosterone, anabolic steroids?

WILL: We don't know. We do know there was chemistry was involved, and we did not want games settled by who has the best chemist.

HANNITY: OK. Good to see you. Great book. I love watching my Yankees and Mets this year.

HANNITY: All right, George Will.