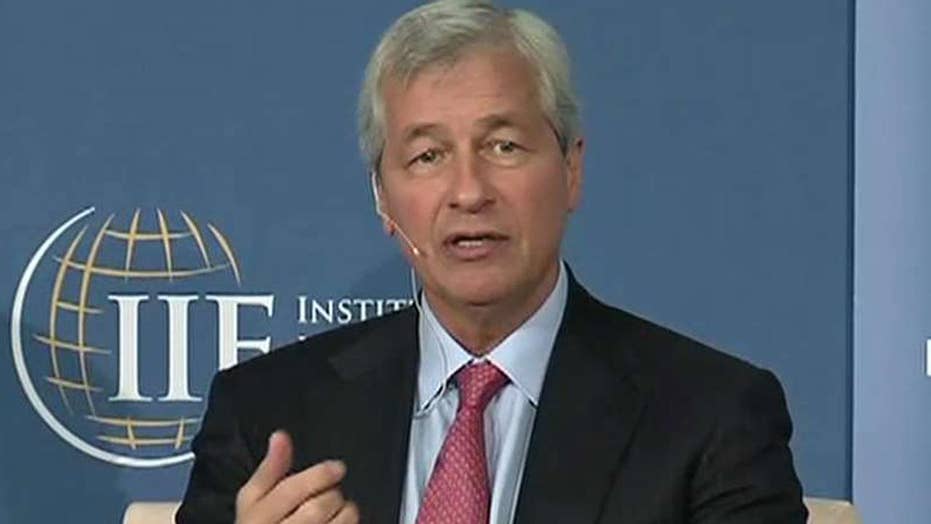 John Layfield: The only thing that is bipartisan in D.C. is incompetence. ObamaCare passed with a one hundred percent partisan vote. If there is repeal there is going to be a one hundred percent partisan vote as well. These guys just refuse to work with each other; we have had under three percent GDP vote for a decade now. That is a record and part of the reason is this gridlock in Congress.

Lee Carter: I commend him for being angry because you know what? That is the voice of the American people right now, they are angry, they are frustrated and things aren't getting done. Yes the jobs number right now is looking good; the markets right now might be looking good. If taxes don't get done if health care doesn't get done, what hope do we have? What can we say?

Gary B. Smith: When Jamie diamond refers to were not getting tax reform done I'm 100 percent in agreement. Healthcare, I wish they would just repeal ObamaCare and try to get back to a free market. Unfortunately he does a lot of big politicians/ CEOs do and thinks that the role of the federal government is there to solve things. John mentions we don't have a national energy policy, we didn't have a national internet commerce policy either but we came up with companies like Amazon and EBay.

Jessica Tarlov: I find it hilarious to hear Jamie Dimon complain when he fully enjoyed his bailout and obviously played at critical role in sinking the economy with those other big banks and we had to step in and help him out there. Jamie Dimon has profited off of big government for sure. I do agree with the sentiment there that D.C. dysfunction is hurting everyone at all levels of the economy from the richest to the poorest. I do agree that we have to deregulate. Not to the degree that Donald trump is talking about but I think we have to get our house in order. The problem is that there are no clear solutions for that.

Jonas Max Ferrier: I can almost see how they're going to go to nowhere with tax reform but there's no explanation why deals can't be made with infrastructure spending, that is something that humors everybody and there's no activity there.

Gary B. Smith: Look, I think the best example, there are two: Bush the Second and Clinton. Clinton was mired in scandals and we had such a great economy despite him and because of him with the Internet stuff and stuff like that. The market was rising; you couldn't dislike the guy just because of that. Bush was well loved and then he was like the most hated president at the end people said "oh my gosh all these policies he involved us in all these wars." It's because we entered a recession right at the end of his term.

Jonas Max Ferris: I'd like to think that they need an element of panic to get something done maybe that will help us get tax cuts through if we actually had a serious problem; everyone was worried about getting reelected. The reality is it's hard to look back into the past because with Nixon he was opening up China for trade and talking about adding tariffs.

Jessica Tarlov: Going to the conversation that everyone's been having though about these presidents in the past and what's happened when they've had controversy, those weren't presidents who ran purely on an economic platform that they were going to be the "deal maker."

John Layfield: Unfortunately we are heading in that that direction pretty quick. We have 8,600 retail stores closed this year, we had 6,800 at the height of the recession. We are seeing a jobs loss that will dwarf manufacturing and retail.

Jonas Max Ferris: There nothing bad about technology essentially destroying old businesses which retail may very well be eventually. The problem is that it's happening a lot faster than in past things and were also about on the edge of this whole driverless car/ truck revolution which is also putting a lot of people out of work. My problem isn't that the technology is so bad but that is going to put so many people out of work so fast and there is no plan.

Jessica Tarlov: I do agree especially with what Jonas just said there about making sure that we have good training programs and retraining programs for people who are losing their jobs. This is for you Gary B. I think in light of what's going on here that it's especially We look at our regulatory codes to make sure that small businesses can do as much as possible.

Gary B. Smith: I think soft goods are dead that's going online. Hard goods, I just noticed that you can order a twenty six hundred dollar commercial refrigerator on Amazon, how would you like to get that in the mail? I think groceries are safe retail. How many years do you think until the government comes in and tries to break up Amazon because it's a monopoly? That will kill all of our efficiency there.

Lee Carter: I think it is ripe for disruption though. There's got to be something that's going to come. All of our lives are powered by Amazon. Bricks and Mortars I think we are seeing more and more turning into experience. I think there are a lot of opportunities for small business owners through Amazon, through Etsy, through EBay that they would never otherwise head.