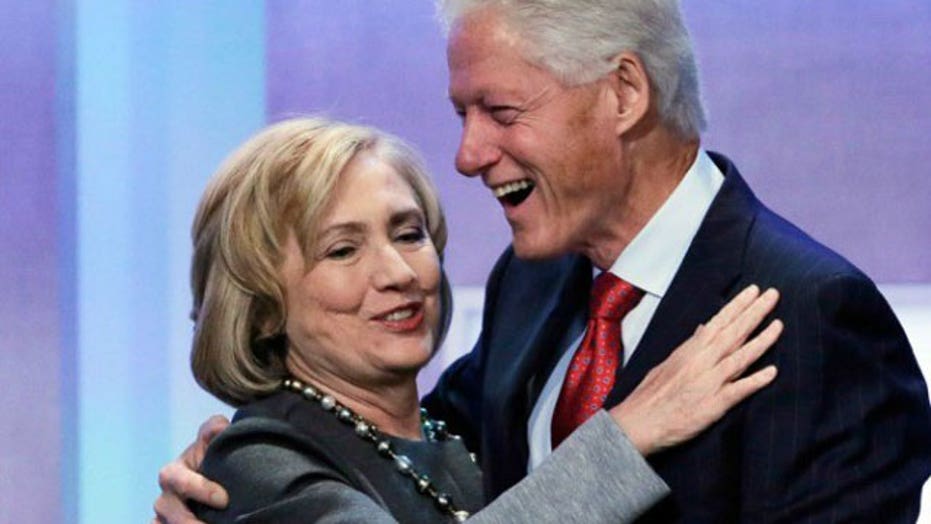 How the Clintons made their money

New book says the Clintons are profiting from their charitable foundation

O'REILLY: "Personal Story Segment" tonight a new book entitled "Clinton Cash: the untold story of how and why foreign governments and businesses help make Bill and Hillary rich" -- very long subtitle. Well, it's putting Hillary Clinton on the defensive, no question about it. The book is going to be released in two weeks. It's already a major controversy.

With us now to explain what's going on Melissa Francis who anchors her own program on our sister network, the Fox Business Network, 2:00 p.m. Eastern time. I have to say that.

O'REILLY: If I don't say that I get fined -- sister network.

FRANCIS: You can afford it.

O'REILLY: I can. But I don't really want to get fined unless I really feel strongly and I don't. Sister network is fine.

FRANCIS: Well, here's the thing. People have long looked at the money machine that's behind the Clintons, whether it's the speeches or it's the foundation and they have tried to say that this influences her decision- making and that would be dirty. Someone needed to dig in and try and connect the dots and say on this day the foundation of the Clintons accepted money from this government and then she made this decision the next day on behalf of the State Department that wasn't in America's interest. He purports to have done this. They have leaked a few little bits out.

O'REILLY: This is Peter Schweizer, the author, who is a conservative person, Heritage Foundation?

FRANCIS: I'm not sure if it's Heritage. I know he worked for the Hoover Institution.

FRANCIS: But he is, you know, is he a hard core investigative journalist. He is respected by the "New York Times".

O'REILLY: And he is going to have to back up his facts and the Clinton Foundation finances are public.

FRANCIS: They are public. They haven't been totally transparent and what they have put out there has been really questionable. I mean they're taking tens of millions of dollars from the Saudi government. You are wondering if the Saudis really wanted to provide mosquito netting in Africa they could do that on their own. They don't need the Clintons.

FRANCIS: So you begin to wonder what do they think they are getting for the money?

O'REILLY: Right. Ok. So Hillary Clinton has a very powerful position as secretary of state.

O'REILLY: But she is not a decision maker on foreign policy. President Obama is the decision maker. She can say I recommend you do this. She can do a few things but not the big things. For example, I think in Mr. Schweizer's book he says in the nation of Colombia, there was a quid pro quo. A big donation from some guy and then all of a sudden he gets a lucrative contract -- right.

O'REILLY: Well, Hillary Clinton can't make those contracts happen. They have to happen at a bigger level, I believe. So is it all implication?

FRANCIS: It was a free trade agreement that went their way. There was money that the Clintons got from a board member in the Keystone XL Pipeline. The state department was looking at that and writing a report at the time.

O'REILLY: So she just said nice things and somebody else made the deal.

FRANCIS: Well, but still -- I mean it would be surprising that she was now against the Keystone Pipeline -- right. That doesn't fall into her wheel house. If she is doing something outside of what you would expect and then she's also getting money in her family you start to really look at these things.

O'REILLY: All right. Two other questions that aren't speculative. Number one she is running on it seems income inequality when she is I just pointed out Dr. Goolsbee making all her money at the top 1 percent -- giving speeches for six figures, you know, and Bill Clinton --

O'REILLY: As she is secretary of state his fees went up. His lecture fees went up dramatically. As soon as she left, they went back down again. So, does this hurt her?

FRANCIS: I mean it's interesting. She tries to paint herself as an every person that's the problem. She's made hundreds of -- at least $100 million -- could be more, the two of them together. They point at these other CEOs that have made that kind of money and there was that "Washington Examiner" article I believe it was where they were quibbling over who makes more, the CEO or Hillary.

They're both beyond wildly wealthy. It's when she tries to then say we were dead broke coming out of the White House.

O'REILLY: But they were dead broke coming out of the White House.

FRANCIS: Because they were trying to buy a $1.7-million house and they couldn't get it mortgage. How many broke people can buy --

O'REILLY: No, it's because they had so many legal fees defending Bill's conduct. That doesn't make any difference.

The final thing I think she may be having to explain is they shelter a lot of their money so they don't have to pay taxes.

FRANCIS: What you are thinking of is the inheritance tax. And this is another thing where she has gone out there and said rich people, you know, if you have more than $5 million you are passing on, you should pay this 40 percent tax or it should be higher.

FRANCIS: It turns out that they have wisely shielded their assets in a living trust so that Chelsea won't pay that tax. But she is out there advocating, pounding the table for people to pay more --

O'REILLY: And then she shelters it --

O'REILLY: I'm smart enough to hire Swiftie and Swiftie's got me into this -- what is it again?

FRANCIS: Right. It's a living trust.

O'REILLY: Living trust. Swiftie got me in there but you pay the 45 percent. I mean I think she has got some problems there.

All right, Melissa Francis from our sister network.