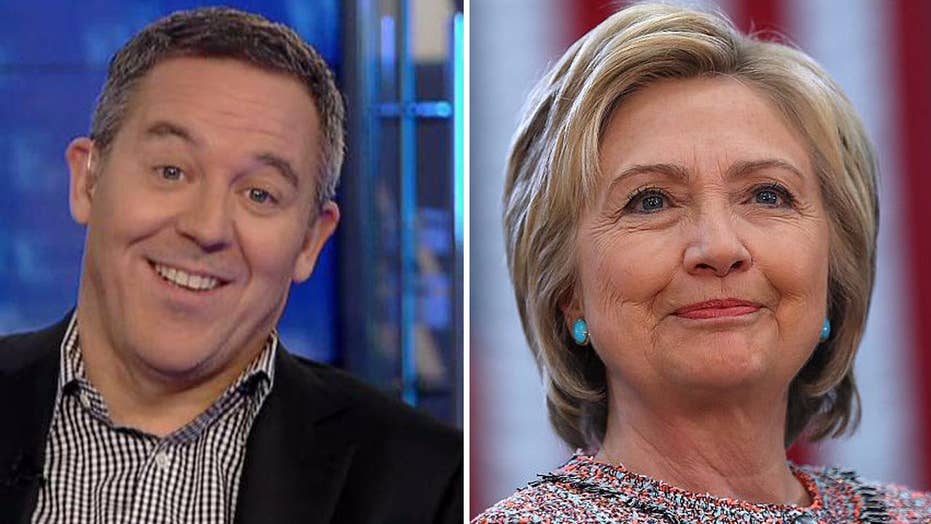 Gutfeld: The nauseating 'thank you' notes to Hillary

Like a drunk neighbor in your front yard, Hillary Clinton wandered onto yet another TV show to crap on the president:

HILLARY CLINTON, FORMER DEMOCRATIC PRESIDENTIAL NOMINEE: I was right in the middle of our government responding to the horrible effects of the earthquakes in Haiti. So I knew what we're capable of doing. And you know, I waited because I thought, you know, they don't need me saying, "Hey, send naval assets. Get the hospital ship Comfort down there." But a couple of days later, nothing was happening. So I tweeted.

If they aren't the highest priority of your government in responding to such a natural disaster, what are -- what are you people spending your time doing? Right? Golfing, tweeting, watching cable TV?

She's a real piece of work.

Look, I don't blame her. She's still angry, still bitter, still Hillary. Apparently finding her grandchildren boring, she cruises the airwaves, slamming the guy who beat her, still, as people suffer and the guy who won consoles them. At times she sounds like she's campaigning. But for what? It's like this is high school, and she's vying for Most Likely to Clear a Room With Her Blood-curdling Laugh.

There's tragedies going on from Vegas to Puerto Rico and Hillary sees fit to remind people what she would've done if she were in charge. She would have done something. But during the election, she did almost nothing but lose. She's like a dumped ex who keeps writing long letters to the guy's parents, reminding them how their son screwed up.

Oh, but I saved the best for last. You're going to love this. Check out the female writers at Jimmy Fallon, writing Hillary thank-you notes. Warning to viewers: Have a bucket nearby.

UNIDENTIFIED FEMALE: Thank you, Hillary Clinton, for handling this difficult transition with more grace than than I ever could've imagined. That being said, call me day or night, and I will be there with a gallon of ice cream and two spoons to tell you, girl, you are so much better than him.

UNIDENTIFIED FEMALE: Thank you, Hillary, for always sticking to the issues even as people criticized you for superficial things like your hair, your wardroom, and your appearance. You showed girls everywhere that politics isn't a popularity contest. Because if it were, you would've won by about 3 million votes.

UNIDENTIFIED FEMALE: I was with her. I'm still with her. And right now I literally am with her. Can I take a selfie?

CLINTON: Yes, of course. Of course.

MILEY CYRUS, ENTERTAINER: Can I give you a hug?

That is amazing. They're treating her like a lonely friend who lost one of her six cats. No, that's not Joan of Arc, not even Joan Crawford. It's Hillary Clinton, the reason why we have Donald Trump. And the more that we see of her, the more reassured Americans are that they made the right choice.

So Hillary, there's the door. To quote Sam Malone of "Cheers," "You don't have to go home, but you can't stay here."