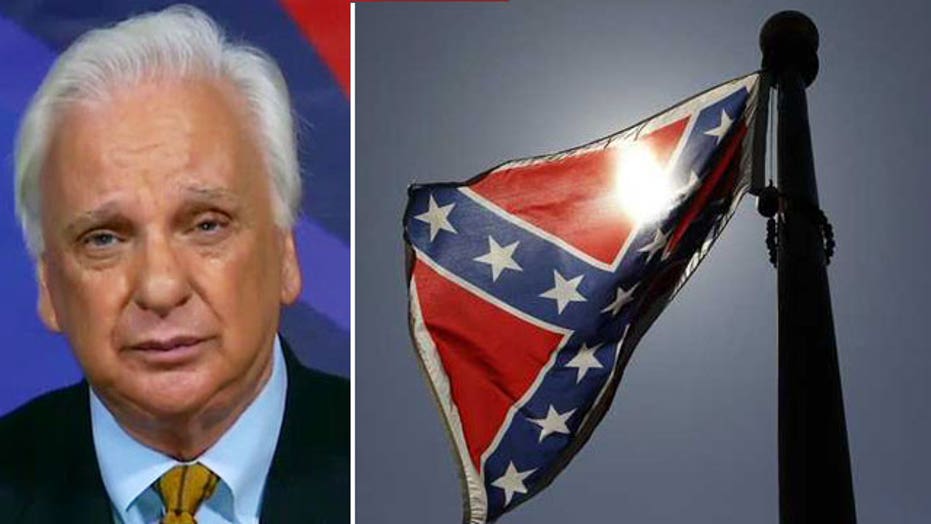 Gross dishonesty in the media

Bernie Goldberg weighs in on the reporting the Confederate flag debate

On Monday, we had an honest debate about the confederate flag controversy.

O'REILLY: You say the confederate flag is a symbol of hate and you believe that.

JUAN WILLIAMS, FOX NEWS ANALYST: That's the way I feel when I see it.

O'REILLY: Ok. Ok. And absolutely 100 percent legitimate. For some other people who see it in a historical context --

WILLIAMS: Oh, get out of town.

O'REILLY: In war. And in your mind it represents hate. So, and everybody should know what the two sides are.

O'REILLY: Please notice I did not say the confederate flag symbolizes bravery, I didn't say that. I was paraphrasing what some Americans believe in order to present both sides of the story. That's what we do here. Enter the race hustlers who do what they always do.

HAYES: Now almost as soon the backlash against the confederate flag started to gain momentum the backlash got under way. Much of it from some pretty predictable sources -- Rush Limbaugh railed that removing the flag from the state capitol was all about destroying the South. Bill O'Reilly said it represents the bravery of confederates who fought in the civil war.

O'REILLY: Complete distortion. Again, I said some believe it represents bravery. And I clearly said the confederate flag represents to me oppression.

Now, the marketplace has spoken about the guy you just heard. He is the biggest failure in cable news. But the fact that he is allowed to distort day after day after day is troubling.

Joining us now from North Carolina the purveyor of BernardGoldberg.com, Mr. Goldberg.

Let's take the "Talking Points Memo at first. Do you agree with me that America is now being besmirched in an almost unprecedented way?

There is a certain way the liberal elite in this country show how virtuous they are, Bill. And that's by bashing America as a racist country because it makes them feel better about themselves. That way they can say we're for the underdog, we are fighting white oppression or white privilege or now white supremacy. It's what has been called they're showing good racial manners.

Now, look, as you said, in a country of over 300 million people, are there some racists? Unfortunately, yes. But this is not a racist country or anything like it.

So, here is my message to the progressives out there. Charleston, South Carolina -- as terrible as that was -- is not Selma, Alabama and this is not 1965. Baltimore is not Selma. And Ferguson, Missouri wasn't Selma.

Progressives amuse me because they don't progress. They are stuck in the past. This is not the same America as we were in 1965. That was 50 years ago. We have changed for the better and we have changed a whole lot.

But, some believe, and now I'm using the confederate flag, some believe, all right, that the progressive movement to diminish America and label it a racist nation is political because then they can mobilize blacks and other minorities to vote for the left and tie in Republican white guys or Ben Carson gets the nomination as a Republican black guy with the supremacist, you know. And some believe it's a political play here. Do you see it that way.

GOLDBERG: If it's a political play, I think it's a bad, bad move because -- well, let's first take why it might be a political play. Liberals see the answer to almost everything in government. So, if they can say this is a racist country, well, what's the solution? More government. More money. More trillions spent on programs that very often don't work.

But the reason I say I don't think it's a good political move is because, yes, the far left is going to believe we are racist. And conservatives -- by the way, that's who they are calling racist. Let's not pretend it's just some vague charge.

O'REILLY: But that's -- anybody that's associated with the Republican Party even if you are a moderate they will call you a racist.

O'REILLY: Just depends on how many reasonable people there are. I mean that's -- you know, the far left is hoping that they can just overwhelm with propaganda the truth. Just overwhelm the truth and that's what they're hoping.

GOLDBERG: I don't think it's going to work. And the real pity in all of this is that liberals who are at the forefront of civil rights have turned the word "racist" into a meaningless word. Once upon a time, it was a serious indictment, "racist". Now it's mush thanks to the left.

O'REILLY: All right, Bernie Goldberg, everybody.