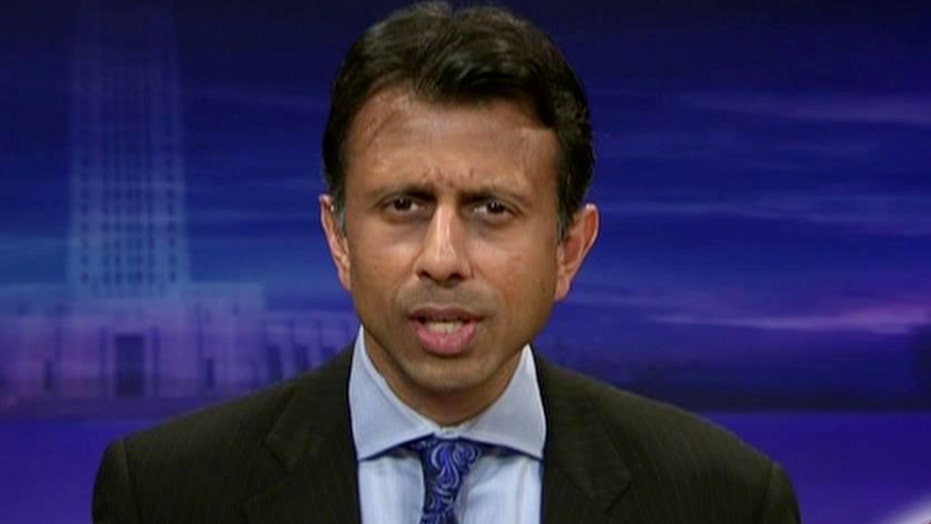 This is a rush transcript from "Your World," May 7, 2015. This copy may not be in its final form and may be updated.

NEIL CAVUTO, HOST: All right, green light on, the Senate just voting 98-1 to give Congress the right to review any nuke deal that the president cuts with Iran.

But with the ayatollah slamming it, the one guy who voted against that bill, Senator Tom Cotton, telling our own Bill Hemmer that it's just time to scrap it.

SEN. TOM COTTON, R-ARK.: This latest speech barn-burner speech from Ayatollah Khamenei is just another example of why the president shouldn't have gone down this path to begin with. In the middle of his speech, the crowd once again began chanting, death to America, death to England, death to Israel.

CAVUTO: To Louisiana Republican Governor Bobby Jindal, who says that the senator has got it right.

Well, governor, always good to have you.

But here's my thought on this, and trample on me all you want. Then let Congress vote on whatever final deal it gets, up or down, and let that be the final straw, the final curtain act here. You don't have to yank anything. Just that will be it, finis, done, over.

GOV. BOBBY JINDA, R-LA.: Well, Neil, thank you for having me back on your show.

I want to praise Tom Cotton for taking a principled, courageous stand. I agree with him. I think no deal is better than a bad deal. I wish the Senate would have allowed debate on amendments. Why not, for example, say, if we're doing a deal with Iran, they should release American prisoners?  Why not say they should recognize the right of Israel to exist? Why not say they need to end support for terrorism?

Why not say that this deal should actually do what the president said it was going to do? For example, get rid of their enriching capabilities, get rid of their stored enriched uranium. Cut off the path to a plutonium pathway. Have anytime, anywhere inspections. You have already got the Iranians now saying, hinting that we may not be able to good into military facilities.

A bad deal is worse than no deal. What I worry is that this president is about to start a nuclear arms race in the Middle East, where the Sunni countries are now going to want their own nuclear capabilities and perhaps the Saudis and others will buy that from Pakistan.

CAVUTO: But judging by this vote, because obviously there are a lot of Democrats on board with that. Only one against, of course, Tom Cotton, the Republican. So they would reject a deal that they don't like, so it's going to go down to defeat anyway, right?

I hope that the House -- there's still time for the House to improve this bill. What I worry about, this flips the logic on its head. And in reality, it's going to take a two-thirds vote to reject any kind of bad deal that the president sends to the Congress. What I worry about, you have got a Congress that already has waved the white flag of surrender on amnesty.

They're not -- I worry they're to fail when it comes to repealing ObamaCare. And here, if they're not willing to fight for good commonsense amendments, Neil, what confidence do we have they are going to actually stand up to the president? It will take a two-thirds vote under this bill to actually reject a -- because he can veto their disapproval.

Why in the world are we now giving them what they want, which is a pathway to become a nuclear power? It's not too late for Congress to step in and rescue the country from this president's very, very bad deal.

CAVUTO: Well, I think their backbone or no backbone, I think you're right in both parties' sense there, Republicans as well. This deal, as it stands now, we don't know what the details of the deal are, to your point, Governor. It's done. Stick a fork in it.

JINDAL: Well, Neil, what I worry about is a nuclear-armed Iran is an existential threat to not just Israel, but also to Europe and the United States.

And what I worry about is if Congress is already capitulating today, if the Senate today is not willing to stand up for commonsense amendments, remember, this is an administration that released five prisoners from Gitmo to get a deserter back, yet we're not going to insist to Iran they release their American prisoners.

What I worry about is that, when it does come time, when this president does present a bad deal, Congress won't have the fortitude to actually shoot it down or try to improve it. That's -- this could be one of the worst legacies this president leaves for his successor, for the country.

CAVUTO: All right. Let me ask you, if you don't mind, I always indulge in domestic politics here, and everyone is asking, when are you going to join the 500 or 600 other Republicans running for president?

JINDAL: Well, a couple of things.

We have got a legislative session that ends June 11. I will make my decision shortly after that. Neil, one of the things I have done differently from others that are in or thinking about getting in, we spent this last year-and-a-half thinking about what the next president needs to do.

This president has caused so much damage to our country, we put down detailed ideas how do we replace ObamaCare, how do we get to energy independence, how do we have education reform with school choice and get rid of Common Core, how do we rebuild our foreign policy.

I'm amazed other potential candidates aren't doing the same thing. We need a leader who will tell the truth to the American people. As one example, we have got to cut government spending. We have cut our budget 26 percent, over 30,000 fewer state government employees.

In D.C., the smart -- insiders tell you, you can't cut government spending.  The reality is this. We can't balance our budget. We can't grow our economy unless we do that. I worry the government is going to swallow up our economy.

The American dream will become the European nightmare unless we dramatically reduce the size of government. So we have spent our time thinking, not only how do you get to be president, but what the next president actually needs to do. And I'm surprised others aren't doing that.

To date, we are the only one that has offered a detail plan on how you actually repeal and replace ObamaCare. I'm still amazed that other candidates or potential candidates haven't offered their own ideas.

CAVUTO: All right. I know you have a book coming out in the fall. So, is that the time you're going to announce?

JINDAL: Well, no, if we make a decision to get it in, it will be shortly after our session. So, June 11 is when the session ends. We will make our decision one way or the other before then.

Governor, it's always a pleasure. Thank you, sir.

JINDAL: Neil, thank you for having me.

CAVUTO: Bobby Jindal from the beautiful state of Louisiana. All right.