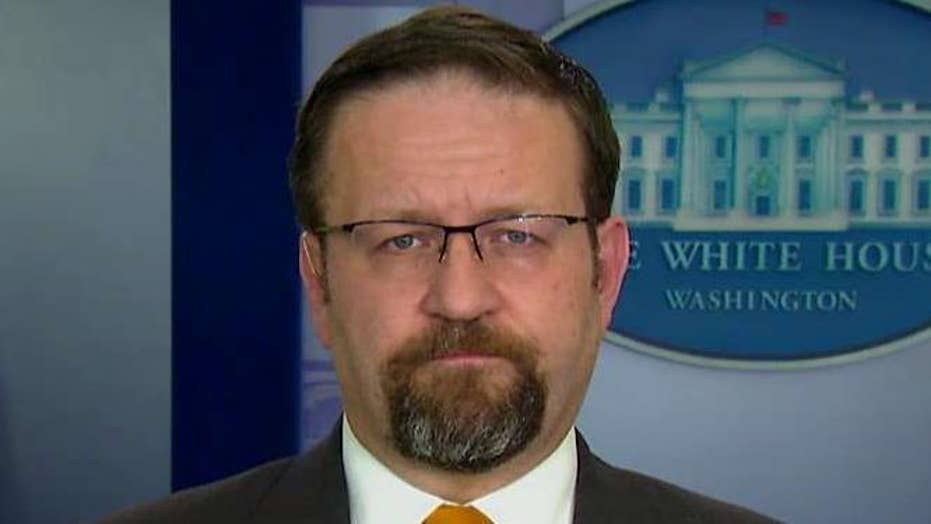 Gorka: I never said Tillerson was 'nonsensical' on NKorea

On 'Your World,' the White House adviser says his comment was about reporters 'forcing' the secretary of state into making statements on military options

This is a rush transcript from "Your World," August 10, 2017. This copy may not be in its final form and may be updated.

LIZ CLAMAN, "YOUR WORLD" GUEST HOST: All right, did you catch this headline in The Washington Post? "With Fire and Fury, Trump Revives Fears About His Possession of Nuclear Codes."

Reaction now from Sebastian Gorka, deputy assistant to the president.

Sebastian, good to see you.

It looks like The Washington Post interpreted the president's fire and fury statement as, quick, grab the nuclear football, I have got the codes.

CLAMAN: Well, I'm going to take the time, because a lot of headlines have different interpretations of what the president said.

But, in the past, during the campaign, he said things like: "I love war. I want to be unpredictable."

And he's also said, I guess, you know, what kind of things would really, really look like saber-rattling in advance, that he would be ready for that.

So, do you see how people could look at this statement and wonder what is next?

GORKA: Only if they're irresponsible or if they have a political agenda to drive, instead of the truth.

Look at the recent video that was released from 18 years ago with Tim Russert. This is a president who has understood for decades the geopolitics of the world, and especially the nuclear blackmail that North Korea has been trying to execute about the West.

Do you feel that he and his team have reached that point, and it's saturated, and it's time to respond militarily?

GORKA: What do you think after 30 years of appeasement?

This started -- the real American policy of appeasement started under the Clinton White House, Bill Clinton, and then exacerbated under the Obama White House. What has it led to?

CLAMAN: And President Bush, too.

How is following the course we followed for the last 20-plus years going to bring a resolution that is good for America or for the Korean Peninsula? It's failed. Just like appeasing Hitler in 1938 in Munich, appeasing the dictatorship in North Korea brings more escalation.

Think of the fact that, on, Saturday what happened? It wasn't some nations of the United Nations Security Council. All of them, to include China and Russia, said, enough is enough. That's all you need to know. The president has sent a signal.

CLAMAN: And, of course, you know, my dad was a doctor. He used to say, if you're using the same medication, and the patient isn't getting any better, change the medication. So, that may be exactly where he's going.

I would be remiss if we didn't bring up what just happened at the secretary of state's spokesperson's meeting before the press this morning.

Now, let me back up here for our viewers who might not know. I believe, this morning, you gave an interview to BBC Radio, during which you said that it was nonsensical for Secretary of State Rex Tillerson to discuss military matters and that he was out of line.

CLAMAN: You have never said...

GORKA: I never said the secretary of state was -- that's fake news 101.

CLAMAN: Well, there's audio of you saying the word nonsensical.

CLAMAN: So, you're denying that you said that it's inappropriate perhaps for Rex Tillerson to have told the American people to calm down?

No, I never said that. I said for reporters to force our chief diplomat, the amazing Rex Tillerson, to give details of military options is nonsensical. He is the secretary of state. That means you don't understand what the words secretaries of state means. It's fake news, classic example.

She even said as she walking out to the press event there that she was told about it.

So, let's hear what she had to say to reporters who asked.

QUESTION: The suggestion that was made is that, basically, the secretary, Secretary Tillerson, shouldn't be involved or shouldn't be listened to as it relates to policy towards North Korea. Is that -- is that something that you agree with?

HEATHER NAUERT, STATE DEPARTMENT SPOKESWOMAN: I think I that everyone has clearly heard what Secretary Tillerson's forceful, forceful comments have been and continue to be on the issue of DPRK and other countries as well.

QUESTION: And they should be paid attention to, right?

NAUERT: I would think so, yes.

QUESTION: All right, so the idea that...

NAUERT: He's a Cabinet secretary. He's the fourth in line to the presidency. He carries a big stick.

QUESTION: And Dr. Gorka is where in that line of succession?

NAUERT: I don't work with Dr. -- with Sebastian Gorka. I have known him from a previous life and a previous career, but I have not spoken to him about the comments that he made.

NAUERT: And let me just leave it at that.

CLAMAN: Sebastian, you know this is going to be all over the papers. And whether you had the exact meaning that people have now interpreted it as, it looks like, to some people, it looks like -- forget backstabbing -- that you front-stabbed the secretary of state.

And, you know, people look at that and say, who -- who was he to admonish any process that secretary of state would state? He's hand-picked by the president.

GORKA: I was admonishing the journalists of the fake news industrial complex who are forcing our chief diplomat into a position where they're demanding he makes the military case for action, when that is not the mandate of the secretary of state.

He is our most senior diplomat, and he's done an amazing job to get 15 nations of the U.N. Security Council to tell North Korea enough is enough. But when reporters try to force him to make statements regarding military options, they have no idea what they're talking about. And if they think that's a story, they're not journalists.

CLAMAN: Well, he doesn't look like he was forced. I'm glad you're clearing up how you perceive it. But he didn't look like he was being forced to simply say we're not on the brink of war, certainly, with North Korea, and people should sleep at night.

And then, today, President Trump just said people of this country should relax.

GORKA: They should. Well, they absolutely should, because we have an administration, including Rex Tillerson, Secretary Mattis, the president, H.R. McMaster, individuals who are serious about the security of this nation, and they will take every measure, including diplomatic, including military, including financial, informational, intelligence, to secure this nation.

So, yes, everybody should rest easy that this administration will protect you.

But if a journalist doesn't understand the difference between diplomacy and military affairs, then they're not fit to be journalists.

CLAMAN: Sebastian Gorka, thank you very much. We appreciate your coming on.