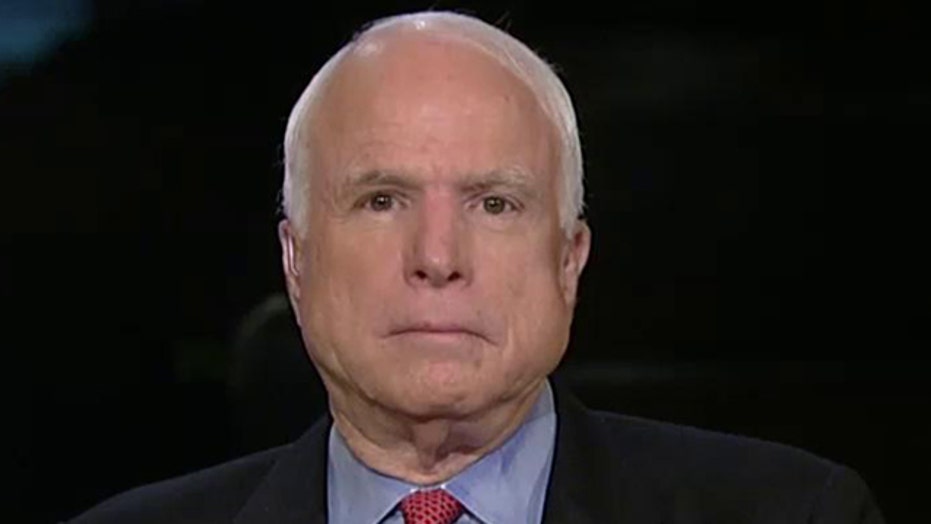 Lawmaker breaks down the latest developments

This is a rush transcript from "Hannity," July 17, 2014. This copy may not be in its final form and may be updated.

SEAN HANNITY, HOST: Here with analysis of all this big breaking news out of Ukraine and Gaza, Arizona Senator John McCain. Senator, good to see you. Welcome back, sir.

HANNITY: Let me start with first the president. He's been criticized today because he continued fundraising trips. He just landed back in Washington moments ago. Here we have our biggest ally involved in a ground mission. And then we, of course, have 300 people -- 298 people killed in this -- with a missile taking their plane out of the sky. Was that the right thing for the president to do?

MCCAIN: Oh, I don't understand this president. Crisis on the border, he did the fundraisers, the fundraisers in New York while there are major, major conflicts, not to mention the loss of American lives, is reported that there were Americans on that airplane. I do not understand it.

I think your network has already played the clip of Ronald Reagan's reaction when the South Korean airliner was shot down. This is just what we used to call in the military AWOL.

MCCAIN: Well, first of all, recognize Vladimir Putin for the KGB apparatchik that he is. By the way, you might have heard his statement that responsibility is with Ukraine, the same guy that said it was uniforms bought at stores when they went into Crimea.

But first recognizing from where he is. Second, it's just been cowardly. It's a cowardly administration that we failed to give the Ukrainians weapons with which to defend themselves. These separatists may not even have occupied and had access to these weapons, which apparently, they got at an airfield. And by the way, it takes weeks of training to make someone able to use that system. They're clearly Russian trained.  And these separatists are -- the leaders of them are Russians, as well.

So first, give the Ukrainians weapons to defend themselves and regain their territory. Second of all, move some of our troops into areas that are being threatened by Vladimir Putin, other countries like the Baltics and others. Move missile defense into the places where we got out of, like the Czech Republic and Poland and other places. And impose the harshest possible sanctions on Vladimir Putin and Russia. That's just for openers.

HANNITY: Senator, I'm listening to your criticism, and it's very stern. Let's go to what we know is true and put it up on the screen.  There have been three separate incidents now where we know that the Russians have shot down Ukrainian military planes.

Does it seem like it is connected? It seems based on the timeline and that posting that it has to be connected in some way, right?

MCCAIN: To me, it's compelling evidence that this was done by the so- called separatists, which are, by the way, special operations, special forces of Russians that are Russian-trained Russian military that call themselves separatists.

I think there's already compelling evidence that they thought they were shooting down, again, another Ukrainian air transport aircraft. The other one was at 21,000 feet. This one -- this airliner was at 33,000 feet.

MCCAIN: This is directly loss of American lives here. And the president goes to a fund-raiser? Help me out!

HANNITY: Do you see this as part of what Vladimir Putin did in Crimea? And that is he has territorial ambitions in the Ukraine, and that these Russian separatists that are involved in the shooting down of these Ukraine aircraft, military aircraft, were probably responsible. Here, you know, you've laid out what some of the consequences should be, but it seems that our western European allies are incapable of joining us because of their need for Ukrainian energy, right?

MCCAIN: Right. And Senator Hoeven, Senator Barrasso and I laid out this week a plan where we can get that natural gas that's being flared in Wyoming and North Dakota and we can get it to Europe and to Kiev so they can become energy-independent.

Yes, the Europeans -- well, I hate -- I run out of adjectives as my disdain for their behavior in light of this. But the fact is, that we need energy independence, but at the same time -- by the way, I wonder whatever happened to, Tell Vladimir I'll be flexible if I'm reelected? What about the old reset button? Don't we realize this is an old KGB apparatchik that is hell-bent on restoring what he believes is the Russian empire?

HANNITY: Well, let me go back to Monday of this very week, and Josh Earnest at a White House briefing actually said to our own Ed Henry that Obama has substantially improved global tranquillity. Take a listen to this, if you haven't heard it.

ED HENRY, SENIOR WHITE HOUSE CORRESPONDENT: How does the White House react to the notion that the president is a bystander in all these crises?

JOSH EARNEST, WHITE HOUSE PRESS SECRETARY: I think that there have been a number of situations in which you've seen this administration intervene in a meaningful way that has substantially furthered American interests and substantially improved the -- the -- you know, the tranquillity of the global community.

HANNITY: Can you name one place in the global community where it's tranquillity? And I don't say this mockingly. I wish it was true.

MCCAIN: Wherever there's a fundraiser.

MCCAIN: But let me point out again, at the time Yanukovych was overthrown and the Ukrainian people expressed their desire for freedom, they begged us for weapons. They begged us to give them weapons. You know what we gave them? We gave them MREs and we sent them in by truck, by the way.

If we had given them weapons, perhaps they could have taken that part of Ukraine back and that attack never could have been mounted from what apparently was a base where they captured this anti-aircraft missile capability.

HANNITY: You know, Senator, you and I had a little bit of a spat over whether or not the United States should give F-16s and tanks and moneys to the Muslim Brotherhood. In that vein, as this now ground war begins in Israel today, I guess my question to you is, we are also funding the Hamas- Palestinian coalition government with U.S. tax dollars. Are we making a mistake, sir, in doing that?

MCCAIN: I believe so. I believe so. And by the way, suppose that a country contiguous to ours -- I would ask our viewers, suppose that a country contiguous to ours was launching hundreds of rockets at our territory indiscriminately. What would we do? And the fact is this Iron Dome, which is a result of U.S.-Israel cooperation -- thank God for it.  Think of what it would be like if they didn't have it.

HANNITY: I think that's very well said. And imagine if two thirds of our population, like the Israeli population that have been in bunkers now for the last week-and-a-half, as over 1,200 to 1,300 missiles have been fired into Israeli cities -- what would we do if that was happening in Omaha, New York or D.C. or California? I think we would do what the Israelis are doing, and I think we probably would have done it after the first missile. Senator...

MCCAIN: There's American -- perception of American weakness throughout the world, and we are paying a very heavy price for it and we will continue to until we have a restoration of American strength!

HANNITY: Yes. Do you think, as we watch right now Air Force One -- I see the president has landed in Washington after attending his fund-raisers here in New York, while our closest ally begins a ground war and while 300 people have been shot out of the sky apparently with a missile, very likely Vladimir Putin and Russia -- we'll find out in the days ahead, but the president -- now the door now to Air Force One about to open, and he decided to go through with these fundraisers.

MCCAIN: Well, no. But I also believe that these inflated expectations of the Israeli-Palestinian peace process, once it failed, Mahmoud Abbas then formed a coalition with Hamas, and this is directly related again to American -- failure of American leadership.

HANNITY: All right. As you can see there, we are watching Air Force One. Thank you, Senator, for being with us tonight. We appreciate your insight and your time.