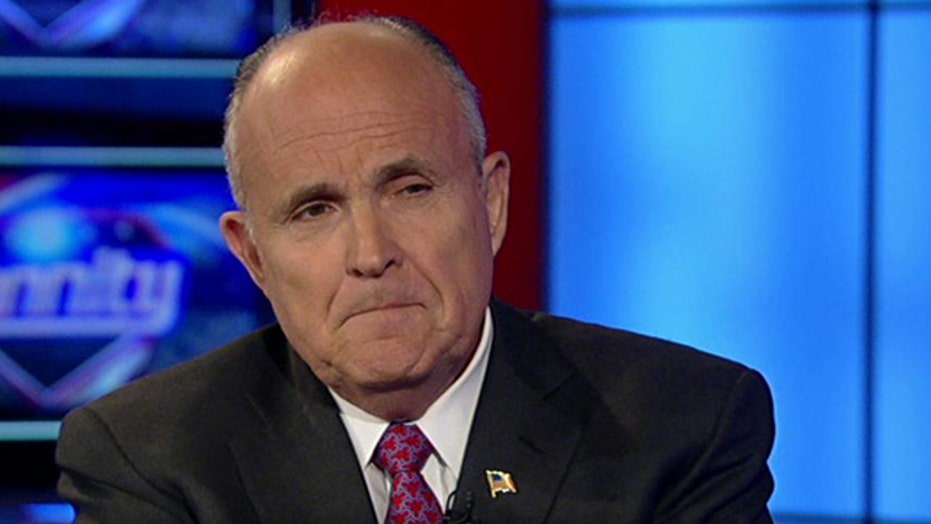 This is a rush transcript from "Hannity," January 7, 2014. This copy may not be in its final form and may be updated.

NEW YORK CITY MAYOR BILL DE BLASIO: We are called to put an end to economic and social inequalities that threaten to unravel the city we love.

DE BLASIO: And so today, we commit to a new progressive direction in New York.

DE BLASIO: We will ask the very wealthy to pay a little more in taxes so that we can offer full-day universal pre-K for every child in this city.

DE BLASIO: And we'll expand community health centers into neighborhoods in need so that New Yorkers see our city not as the exclusive domain of the one percent.

DE BLASIO: Social and economic justice will start here and will start now.

SEAN HANNITY, HOST: To each according to his need, from each according to their ability, just a small glimpse of New York City mayor Bill De Blasio in his widely controversial inaugural address. Now, the Big Apple's new chief executive -- he took progressivism now to a whole new level, and his call to action is raising a lot of eyebrows.

Here to respond to those remarks for the very first time, former New York City mayor Rudy Giuliani. By the way, that little tax he's talking about is, what, a thousand dollars a person.

RUDY GIULIANI, FORMER NEW YORK CITY MAYOR: It's -- the thing that I find the most offensive was the attack on Mayor Bloomberg during the -- during the inauguration.

HANNITY: Yes, that was awful.

GIULIANI: There have been many inaugurations and ex-mayors sitting there, whatever. I mean, those attacks were vicious.

GIULIANI: They were mean. They were mean-spirited. And really, the mayor is owed an apology. He -- he -- he -- whether you agree with Mayor Bloomberg completely or you didn't, he was a good mayor. He worked his -- he worked tirelessly for the city --

HANNITY: He did a lot of good things. It's the nanny state stuff that --

GIULIANI: OK. All right. So you never agree with anybody completely. But he left a city that's in good condition. And to be characterized as a plantation, that's outrageous, absolutely outrageous!

Also, I'm getting really annoyed at this concept of progressive. There's absolutely nothing progressive in this class warfare stuff. It's retrogressive. Every single policy that they're talking about is a policy that has failed several times historically, going back 130, 140 years.

HANNITY: How many people got off welfare?

GIULIANI: And I would like to emphasize the fact that I started a year before Newt Gingrich and Bill Clinton --

GIULIANI: So it wasn't -- this wasn't a spin-off of -- if anything, the person I borrowed it from was Governor Thompson in Wisconsin. He was my -- he was my model. And then we used it. We called it "workfare." The New York Times viciously attacked me for doing this.

HANNITY: He said, "We don't ask more of the wealthy to punish success. We do it to create more success stories." Now, help -- help people understand because I don't think people that live outside of New York understand -- we got, all right, federal taxes 39 percent?

GIULIANI: Actually, with all the -- 41 percent.

GIULIANI: And then you put in the city, it becomes 12 to 13 percent with the surcharge.

HANNITY: But that doesn't include -- hang on -- a county tax.

GIULIANI: You are -- in New York, you are the junior partner in your earnings. The government is the senior partner.

HANNITY: So 60 cents of every dollar is about right.

GIULIANI: And these are concepts -- the point that I'm trying to make, Sean, is, that they -- these are presented as new ideas. These are all ideas that have failed. They were at the heart of why this city was a disaster in 1993, 1994. They were at the heart of why the city had 10.5 percent unemployment, why the city had a deficit of $2 billion to $3 billion, things that I turned around and things that Mayor Bloomberg expanded on.

HANNITY: Most people want to work, I think.

GIULIANI: Most people want to work, but they can lose that over a period of time. So what you want to do is you want to fight to keep them in the workforce.

How about -- if the mayor wants to do something good, how about setting up a workfare program and getting 30,000 to 40,000 people -- I had 40,000 people working for New York City who were on welfare. Now, the unions don't like that. I mean, if you're owned by the unions, you can't do that.

GIULIANI: But if you're owned by the city of New York --

HANNITY: Yes. What -- what do you think -- how long does it take before you think the negative impact of these policies -- because New Yorkers -- you're right, this has all been tried before, and it's been tried in New York. How long before people --

GIULIANI: It'll take -- it'll take longer than you think because Mayor De Blasio has taken over, despite all that rhetoric, which was horrible, about the city and the condition of the city -- he's taking over a city that Mayor Bloomberg has left, you know, all the fundamentals --

GIULIANI: -- in pretty darn good shape. It's like taking over a business that's doing really well. Before you can deteriorate it, it's going to take a while.

I hope he changes his mind. I hope and pray, and I'm optimistic about the fact that I hope he becomes practical. One of the things that can happen to you as a mayor, it can make you practical. Ed Koch was one of the most liberal members of the House of Representatives when he became mayor, and he became an extraordinarily practical and very conservative mayor.

Now, sometimes it happens. We had the example of President Obama, who probably has gone more to the left --

HANNITY: You told me -- what did Mayor Koch say?

GIULIANI: Mayor Koch said after six months of Mayor Dinkins being in office and people complaining about how the city was really falling part, he said the people have spoken, and now they must be punished.

HANNITY: Great. We're going to be punished on the federal level, congressional level, now in the city. All right, Mr. Mayor --

HANNITY: -- great to see you. Appreciate it.