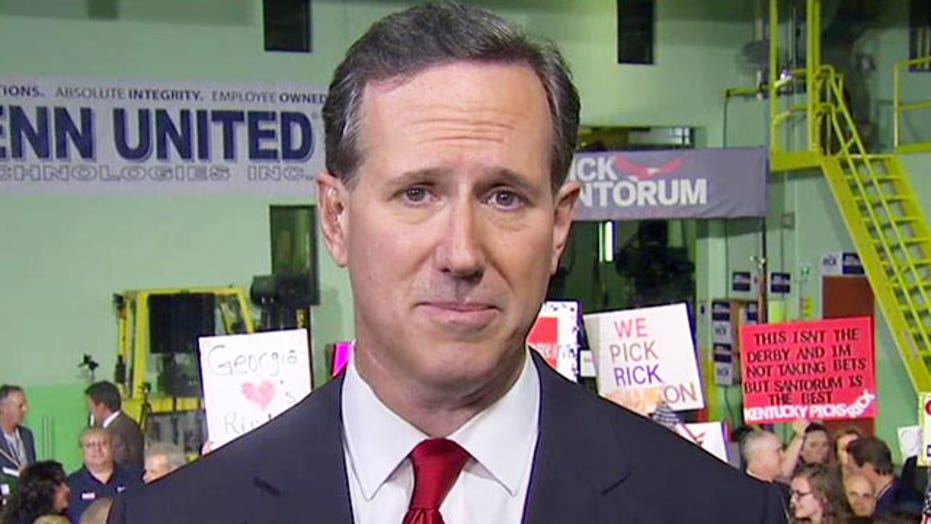 Exclusive: Rick Santorum on why he's running for president

This is a rush transcript from "Hannity," May 27, 2015. This copy may not be in its final form and may be updated.

RICK SANTORUM, R-PRESIDENTIAL CANDIDATE: I am proud to stand here among you and for you, the American workers who have sacrificed so much, to announce that I am running for president of the United States.

SEAN HANNITY, HOST: That was former Senator Rick Santorum announcing his candidacy for presidency just hours ago. The former Pennsylvania senator is the latest to join the already stacked 2016 GOP presidential field.  Here with us for an exclusive interview tonight is the candidate himself, Rick Santorum.

Senator, how are you. I know it's a big day for you.

SANTORUM: Thank you, Sean. I'm doing great. And it's a big day and it's a big message. And it's a message I know resonates with you because that's your roots, working your way up the ladder of success. And we're just trying to make that available for more people.

HANNITY: Why don't you explain that, because I think you sounded a little different than some of your fellow Republicans that are in this field.

SANTORUM: Well, yes, I think we sound a lot different. I mean, we have focused in on where the problem is in America today, and that is that, you know, you see a hollowing out of the middle of this country. The wages have stagnated. Family incomes and median income is going down. And the opportunity to rise, particularly for the 74 percent of Americans who don't have a college degree, it's just not happening. And one of the reasons it's not -- and you know this because you've been there -- is because we've lost our manufacturing base in this country. And that's why I have this announcement at a manufacturing facility. We had manufacturers from all over the country here who are excited about someone who is willing to go out and help America compete again, because we can bring those jobs back here. We just have to have plans to do it.

HANNITY: Explain, if you've got 93 million Americans out of the labor force, 50 million in poverty. You've got 46 million on food stamps for 40 consecutive months, add to that $10 trillion in debt, $100 trillion in unfunded liabilities. How do you dig out of that disastrous mess, specifically?

SANTORUM: Well, yes, I'm going to be putting forth a very detailed plan. I talked a little bit about it in broad brush here today. We're going to propose a tax plan that is a simple, fair, flat tax.

HANNITY: You mean a tax plan, not a tax, right?

SANTORUM: Right, a tax plan. Yes, sorry. I'm having trouble hearing a little bit. But we're going to propose a simple, fair, flat tax that's going to be very stimulative to the economy generally, but in particular to manufacturing. We're going to put things in place that will make America a manufacturing mecca to create the opportunity for us to create jobs so those people that you just talked about have the opportunity to get good paying jobs with benefits.

HANNITY: How do you deal with the foreign policy issues we have? The Middle East is blowing up, the rise of ISIS. You see cities that Americans fought, bled, and died for one after another falling into hands of ISIS.  You see Vladimir Putin on the march. You see China now threatening and pushing America in their own way. You see the Iranians now on the verge of maybe getting a nuclear deal, an Obama seal of approval on a nuclear weapon. Where do you start there?

SANTORUM: There's a lot of places to start. I think you have to start where the temperature is the hottest, and that's in the Middle East.  Iran is certainly -- as you know, Sean, for a long time I've been sounding the alarm on Iran. It was authored Iran sanctions 10, 12 years ago. This is something that is critical for us. I'm hopeful, I pray, literally, I pray, that we don't strike a deal with Iran that puts them that close to a nuclear weapon that's really their option. But if that doesn't happen, and I pray it doesn't, that's going to be a big job for the next president to make sure that Iran does not get a nuclear weapon.

We take on ISIS. I talked here today how important it is not to have a commander in chief with no experience. A commander in chief is not an entry level position. I served eight years on the Armed Services Committee. I've been talking about this problem of radical Islam now for more than a dozen years and traveled the country, traveled the world. And we need someone with experience who knows how to handle that, to go up particularly against a former secretary of state who is very steeped in knowledge in that area.

HANNITY: All right, Senator, we look forward to catching up with you on the campaign trail. Good to see you. Congratulations. Thanks for being with us.

SANTORUM: My pleasure. Thank you, Sean.