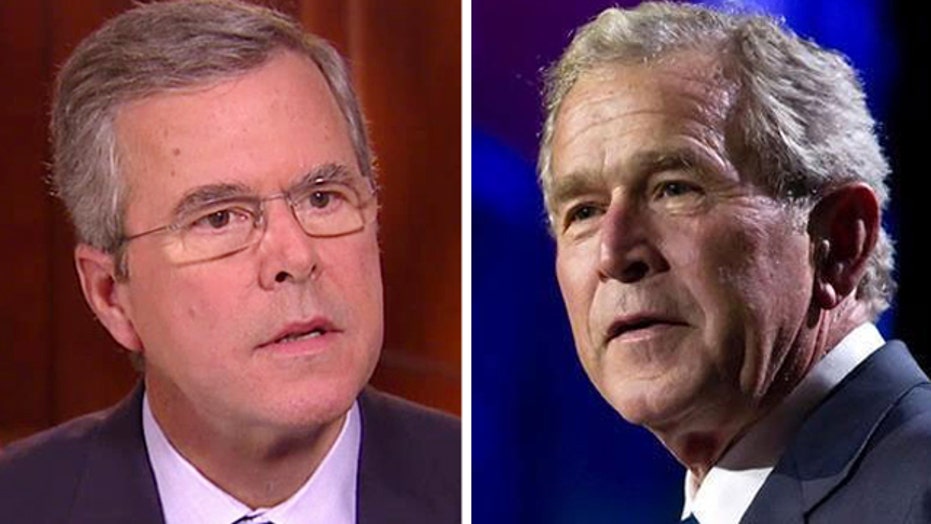 This is a rush transcript from "The Kelly File," May 11, 2015. This copy may not be in its final form and may be updated.

KELLY: George W. Bush, you've said recently, reportedly that you said that he's your top adviser on Israel and the Middle East, that you value his advice on foreign policy which will lead some to ask what specifically, right? So he got criticized by some for being a so-called neocon for promoting values of, you know, he said spreading freedom and ending tyranny but his detractors would say, you know, he was pushing our values on other nations and getting us into wars we shouldn't have been in.

BUSH: I got the whole narrative. It comes my way on a regular basis.  I love my brother and I respect his service and in terms of living presidents and someone 40 has lived this and breathed it, the fight against terror and our relationship starting with Israel but how you build relationships with the countries that are so essential to create security in the world, I do rely on him. And I respect his advice. He's not the only person that advises me. I have, you know, one of the fun things about the journey I'm on is, I get to call people up, I really respect and admire and, believe it or not, they're answering my calls. So of course I'm going to ask my brother his advice. There's no better.

KELLY: Do you see the so-called Bush doctrine, do you subscribe to it?

BUSH: The question really related to Israel and this was leaked out to the rest of the world in this gathering, and there I don't think you'd find a stronger supporter of a strong U.S./Israeli relationship than that of my brother. And that was the reference in which I brought this up. Am I the same as my brother? Of course not, I'm not. I think, for example, our foreign policy ought to be -- ought to be grounded in not just the export of our own values or nation building. Those are good sentiments, but first and foremost in security and peace. And I think what we've seen under this president is, as we pulled back, we're creating an incredibly insecure world. And the narrative that the left wants to bring which is either you're for this nuanced view of pulling back and they were leading from behind and that we're part of the community of nations and blah, blah, blah, that if you don't believe that, you're a warmonger, I just reject that out of hand. The broad bipartisan consensus in the post-World War II era is to have a certain America, an America that leads, an America that understands its power should be used judiciously but needs to be used whenever it's appropriate to do so. That's not what we have today.

KELLY: On the subject of Iraq, very controversial, knowing what we know now, would you have authorized the invasion?

KELLY: You don't think it was a mistake?

BUSH: In retrospect, the intelligence that everybody saw, that the world saw, not just the United States, was faulty. And in retrospect, once we invaded and took out Saddam Hussein, we didn't focus on security first, and the Iraqis in this incredibly insecure environment turned on the United States military because there was no security for themselves and their families. By the way, guess who thinks that those mistakes took place as well? George W. Bush.

BUSH: Yes. I mean, so just for the news flash to the world if they're trying to find places where there's big space between me and my brother, this might not be one of those. But it's important to remind ourselves of lessons learned going forward. The world is different today than it was in 2001. And it's going to be different in 2017 if we allow this president's foreign policy to continue on, the unraveling isn't going to stop.

KELLY: Do you feel that America's place in the world has diminished under President Obama?

BUSH: It has. It has. In fact, name a country where America's prestige or relationship is better today than the day President Obama took office. I can think of two. Cuba and Iran.

KELLY: How will you undo that? I mean, with respect to the Iran deal for example, would you undo President Obama's deal?

KELLY: Many conservatives look at your potential candidacy and say, I like him as a man and even as a politician, but he is the worst possible candidate to put up against Hillary Clinton because you cannot press one of her biggest downsides, namely that the Clintons are history, that that name is history, her candidacy feels old and that the country needs a fresh start. Do they have a point?

BUSH: Megyn, I haven't been in Washington over the last -- ever. I'm not part of Washington. I got to serve as governor of a state, a purple state. And I was the most successful conservative governor probably during the time that I was there. I would say Mitch Daniels and Jeb Bush are the two most successful governors. I can tell that story and I can offer ideas that are about the future and not the past. And I'm energetic and passionate about the needs -- the things we need to fix. I don't feel old, I don't feel like yesterday's news and I'm not.

KELLY: I think it's just -- people roll their eyes and say, another Bush/Clinton, don't we have some fresh faces, even your own mom said something to the effect of, don't we have more than just these two or three families?

BUSH: Look, I have enough self-awareness to know that's a little odd.

Having said that, having said that, if I show my heart, show that I care about people, show my passion for the things that need to get fixed, show my leadership style. Because this isn't like running for the Senate, you know, where you can just vote for me and, you know, kind of the words just go into the ether because you know nothing is going to happen.  Presidents have the chance to lead. And I've led. And not many people who are thinking about running have the leadership experience that I've had.  And if I tell my story, if I go beyond the consideration of this, be a candidate, I think I'll be successful.

KELLY: Let's talk about poverty and race relations in this country.  You recently wrote an op-ed on Baltimore and the situation there and the poverty we've seen in that town. Meantime, the DOJ is now investigating the Baltimore police. Do you think policing is the problem in towns like Baltimore, Maryland, or Ferguson, Missouri?

BUSH: No. Baltimore, Maryland, particularly was a completely racially diverse police department. It has ample resources to get this right. We'll find out, you know, there's a proceeding under way and these police officers are innocent until proven guilty. I don't think it's a systemic problem. Poverty and generational poverty which is really the great challenge -- one of the great challenges of our time, is a problem.  And the welfare state liberal progressive approach to this has failed. At some point someone needs to say the emperor's not wearing any clothes here.  We've spent trillions of dollars and yet under Barack Obama's time, poverty has going up five million. And since the '70s, from the '60s, '70s there was a drop in poverty, the beginning of the programs. It has stabilized, it is actually higher now. Why is that?

Well, it's because we have disrupted meaningful committed family life.  Children are growing up fatherless. The systems around communities have been torn asunder. Churches and synagogues and civic organizations don't exist in these communities to the extent they do in other places. And then we have the worst education system ever devised for young boys and girls, and they don't learn to read and calculate math. And we all excuse it away as a society. We excuse it away that they can't learn. Well, we're here at Liberty University, and I know for a fact that God's given the ability of every child to learn. We better start focusing on their needs and how they can learn rather than focusing on the economic interests of the adults. Baltimore spends 15 grand per kid, I mean, that's double what's spent in Florida.

BUSH: And the outcomes are horrible.

KELLY: The results are terrible.

BUSH: So this should be a catalyst for a deeper conversation about how we restore committed family life. What are the things that we can do to restore community again? And then how do we change our education system? And how do we bring people into the equation to create a more secure and loving place?

KELLY: There's been a debate in the country over the past week about free speech. There was an attempted murder of a group down in Garland, Texas, that was trying to make a point about free speech by inviting folks to draw the cartoons of Muhammad. And many condemned the event and question its wisdom immediately. Others said this is about liberty. Where do you stand?

BUSH: I think it's about both, to be honest with you. I certainly I think the First Amendment and freedom of expression trumps everything else. Doesn't mean it's necessarily appropriate to do what they did. The bigger issue --

BUSH: I think you can. I don't have a problem with that. The bigger problem right now is that we have homegrown disaffected people, terrorists in the making that can receive a tweet or can receive an e-mail and provoke them to drive a thousand miles or 2,000 miles armed with bulletproof vests to go kill people. And the priorities -- I know there's a lively debate about what was inside this hall. I think the first question is, how can it be in this country -- we can't tolerate this. We have to be vigilant. And the guy who is the real hero in this isn't Mrs. Geller or anybody on the other side arguing now, they have the right to do that. It's the police officer who, you know, unarmed with bulletproof vests, I guess, shot these two guys dead. I wish -- I'd like to see him on your show. Because that's the guy that we ought to admire. Because imagine what would happen had he not done his job.

KELLY: Absolutely. Last question about your campaign. And that is, you are off to a fast start initially. It slowed a little. Why is that?

KELLY: Just in the polls.

KELLY: Why is that, and can you get it going again?

BUSH: I'm actually not a candidate yet. So polls are -- I think everybody needs to take a chill pill on the polls until it gets closer. I have enjoyed my time. I've traveled to a lot of different places. I've been everywhere. I've had 20 press gaggles. I don't have, you know, I do town hall meetings. Don't screen the questions. Don't have a protective bubble like Mrs. Clinton does. Don't have town hall meetings or roundtable discussions where I pick who gets to come and I screen the questions and the press has to behave a certain way. I'm having fun doing this. And I think it's better for candidates to be out amongst them.

KELLY: And your mama approves now.

BUSH: Yes, she does.

KELLY: Most importantly as we're going into Mother's Day.

BUSH: You're not kidding.

KELLY: Governor, thank you so much for your time.