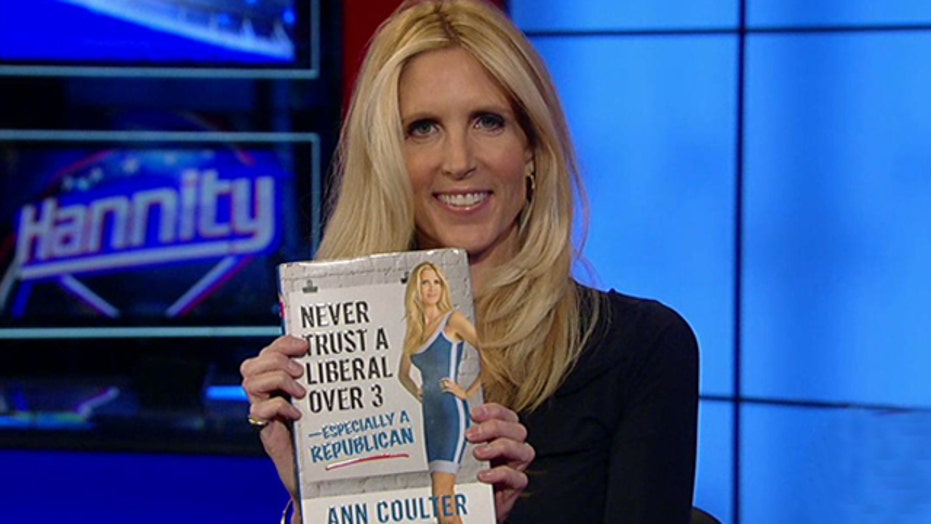 Author discusses 'Never Trust a Liberal Over Three-Especially a Republican'

This is a rush transcript from "Hannity," October 14, 2013. This copy may not be in its final form and may be updated.

SEAN HANNITY, HOST: And now it's the moment you've been waiting for. She says she's fed up with, quote, "idiotic Republican blunders." Her brand new book "Never Trust a Liberal over Three -- Especially a Republican" in bookstores tomorrow. You can get it on Amazon.com. What's up, Coulter.

ANN COULTER, AUTHOR AND COLUMNIST: So glad to be here, Sean Hannity.

HANNITY: Your book covers get better and better every time.

COULTER: That is a good one.

You know why this book is timely is that you've got now establishment Republicans at war with their Tea Party conservative base.

HANNITY: And I'm angry over it.

COULTER: Yes. So part of the point of my chapter one is to get out that paradigm of Tea Party versus establishment. We've lost a lot of Senate elections. According to the Cook report there were 10 contested elections in 2012. Republicans lost 12 of them. In 2010 there were seven contested elections, six months out, Republicans lost five of them. This is not a party that seems overly concerned with winning elections.

Some of these elections to the United States Senate were lost by what you might call the Tea Party, some by the establishment, a lot by Republican consultants. My argument is, in chapter one here, is that the problem we have hucksters, shysters, people running off the Republican party for their own self-aggrandizement, for their own egos, to make money.

I would put Todd Akin, Newt Gingrich, Liz Cheney, Mark Sanford all in the same boat, and the consultants who persuaded Linda McMahon --

HANNITY: Why are you attacking Liz Cheney and Newt?

COULTER: Why, because Newt was never -- I'm already all-in, but he ran for president. And look, I made mistakes like this in the past, too, supporting Congressmen and inspiration leaders.

HANNITY: You biggest mistake was Christie?

COULTER: Perhaps it was.

COULTER: My point is, and these Republicans looking ahead, I'm talking mostly about Senate and House elections, in 2016 we are not going to be nominating a congressman, an inspirational leader, a businessman, only look at governors and senators.

HANNITY: Let me ask this question.

COULTER: These are people looking for TV shows and looking to make money. I love Liz Cheney, but why should we have a primary against a good Republican senator other than for Liz Cheney's ego?

HANNITY: I don't think it's about that. I think she's more conservative.

HANNITY: I don't want get into specifics.

COULTER: But that is the point. There are a lot of problems. We are not concentrating on winning. We are allowing shysters to take advantage of the Republican Party.

HANNITY: She's not a shyster, let's be clear. Here's the question. Because, you're right. You've got to win to have power.

HANNITY: But they're also needs to be principle driving things.

HANNITY: Ted Cruz, Rand Paul, Mike Lee, they stand up, their fulfilling their promise, and Corker and McCain and Peter King are slamming them for doing what they told their constituents they would do.

HANNITY: That really ticks me off.

COULTER: I agree, and it always goes that way, which is why I don't want the conservative Republicans to do what the establishment does, and that is every time Republicans lose for whatever reason, somehow it's the pro-lifers who get blamed. Wait a second. What did we do?

I mean, it's varies from race to race and conman to conman. The point is concentrate on winning. Democrats have much crazier members of their party.

HANNITY: But winning balanced with principle.

COULTER: Yes, because I would make that even stronger than what you're saying -- conservatism is popular.

HANNITY: We've got to be blunt.

COULTER: Because of immigration, by the way -- footnote.

HANNITY: The worst part is all New Yorkers and all people in New Jersey and California, they are all moving out of those states they ruined into red states and they're ruining those states.

COULTER: Let's hope not. And by the way, that is only the first chapter of the book. The book covers absolutely everything because I think a lot of Republicans are sick of politics as I was after the last election.

HANNITY: Not anymore. They're engaged again.

COULTER: Best of the last decade, I have a chapter on Christianity, on crime, on Amanda Knox if you are bored with politics. There's something in here for you.

HANNITY: Which you enjoy. Why don't people understand? You are a provocative, iconoclastic, humorous writer. And you like to push people's buttons, and they respond.

COULTER: I think I persuaded liberals. They're not really attacking me anymore. I think I have finally won them over, Sean. There is nothing in this book liberals disagree with. Disagree with me, liberals.