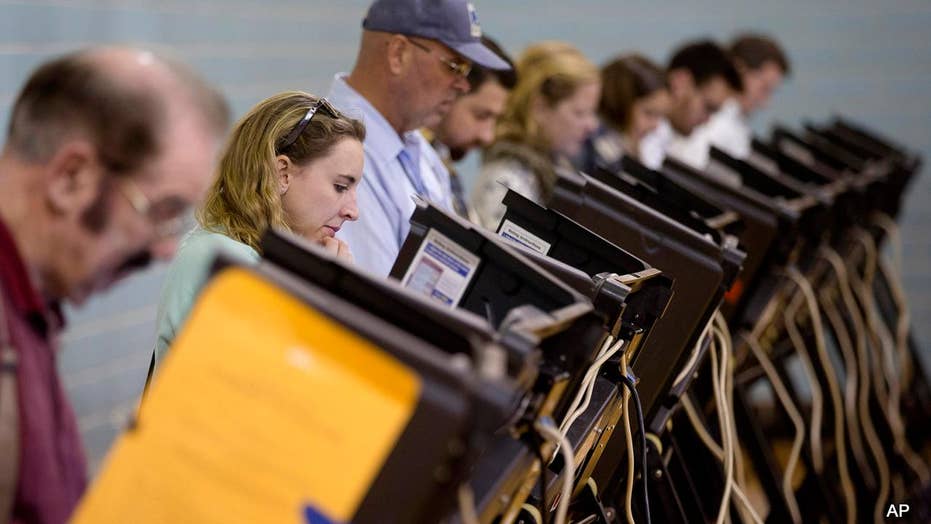 Enough being done to protect integrity of US elections?

This is a rush transcript from "Special Report with Bret Baier," March 21, 2018. This copy may not be in its final form and may be updated.

SEN. RICHARD BURR, R-N.C.: In 2016, were there any votes that were affected by this intrusion into any system in America?

KIRSTJEN NIELSEN, HOMELAND SECURITY SECRETARY: We have no evidence that any votes were changed.

Once these vulnerabilities have been made clear, it is not just Russia that we have to worry about. These are vulnerabilities and attack vectors that any adversary could pursue. So we think the threat remains high.

BRET BAIER, ANCHOR: A lot of testimony on Capitol Hill today about trying to protect the ballot boxes here in the U.S. 2018, beyond, from Russia interference.

Then another breaking story late this afternoon. ABC News had a story about Andrew McCabe. Nearly a year before Attorney General Jeff Sessions fired senior FBI official Andrew McCabe for what Sessions called a lack of candor, McCabe oversaw a federal criminal investigation into whether Sessions lacked candor when testifying before Congress about contacts with Russian operatives. Sessions was not aware of the investigation when he decided to fire McCabe last Friday. Last year, several top Republican and Democratic lawmakers were informed of the probe during a closed-door briefing with Deputy Attorney General Rod Rosenstein and McCabe. Sessions' personal lawyer said that he is not under investigation and that the special counsel informed him that there was no such investigation. McCabe and the firing, Chris Wray, the FBI director, was asked by NBC today about that firing over the weekend. Take a listen.

CHRISTOPHER WRAY, FBI DIRECTOR: I'm committed to doing things objectively and independently end by the book. I think that has to extend not just to our investigations, our intelligence analysis, but it also has to extend to personnel decisions and disciplinary decisions.

I want to be careful about what I can say about the process, but I will tell you that my commitment to making sure that our process is followed, that it relies on objective input, and that, most importantly, it is not based on political or partisan influence is something I am utterly unyielding on.

BAIER: So again, asked the question, he says everything went by the book.

Let's bring in our panel: Steve Hayes, editor in chief for The Weekly Standard; Karen Tumulty, opinion writer for The Washington Post, and Bill Bennett, former education secretary and host of The Bill Bennett Show podcast.

Bill, these stories are quite something. You have to piece them all together. But your thoughts on this "ABC News" stories and then what Wray just said there.

BILL BENNETT, "THE BILL BENNETT SHOW": It's hard to digest because you have a denial by Sessions' lawyer that this is actually going on. So is the story true or not? If the story is true, I think the language of the ABC report was -- he was -- McCabe was overseeing the investigation. Who authorized the investigation? The story suggests the instigation came from the Hill, two Democrat senators, Franken and Leahy, but who authorized it?

The thing I am pretty interested in, though, is this last thing you played, which is Wray. Wray now inserts himself between the Office of Professional Responsibility, the office of the Inspector General, and President Trump, or, if you will, Attorney General Sessions, taking, in essence, responsibility for this decision. But man, McCabe, we need this inspector general report and we need it soon to find out really what was going on.

BAIER: The going bet is it's coming out in the coming weeks. We were thinking days, but probably weeks. Karen, the fact of the FBI director, who we haven't heard from about his deputy's firing, is saying it was by the book, kind of tamps down a little bit of the uproar about the president's tweets over this.

KAREN TUMULTY, THE WASHINGTON POST: Yes, I think so. And I think the president's tweets certainly didn't help. He just proceeded to inflame the whole situation. But the whole -- the revelation that Sessions himself may have been under investigation also goes back to what in Donald Trump's mind is the original sin here, the thing he's been mad at his attorney general for since the beginning of the presidency, which is Sessions' decision to recuse himself from this whole Russia investigation. This suggests that even if he hadn't done it then, he would have had to eventually have done it.

STEVE HAYES, THE WEEKLY STANDARD: You have seen even some of the president's most vociferous critics on the left, Democrats, say that the McCabe firing may well have been justified. People who have been briefed on the details of this, one suspects that if it were not justified they would be letting us know rather loudly. So I think that is a factor here.

BAIER: With leaks or something else.

HAYES: With leaks, in any number of ways. They've become quite good at that.

On the Sessions question in general, you go back to his testimony on January 10th where he said he did not have communications with Russians when he was asked a question by Al Franken. Sessions maintains that he was talking about in a campaign context, but has also admitted that he should have been more forthcoming by allowing for his two meetings with Sergey Kislyak. He also in a follow up written letter on January 17th said that he had not had communications about the election, responding to Senator Leahy. If there had been such an investigation and if we are to believe the statement from Chuck Cooper, Jeff Sessions' current attorney, he's been found to have not committed perjury because the investigation is now over.

BAIER: Yes. In the meantime, all of this talk about Russia, the testimony on Capitol Hill, plus the "Washington Post" runs this story. "President Trump did not follow specific warnings from his national security advisors Tuesday when he congratulated Russian President Vladimir Putin on his reelection, including a section in his briefing materials in all capital letters stating "DO NOT CONGRATULATE." Trump also chose not to heed talking points from aides instructing him to condemn the recent poisoning of a former Russian spy in Britain with powerful nerve agents."

The president tweeting, "I called president Putin of Russia to congratulate him on his election victory. In the past Obama called him also. The fake news media is crazed because they wanted me to excoriate him. They are wrong. Getting along with Russia and others is a good thing, not a bad thing. They can help solve problems with North Korea, Syria, Ukraine, ISIS, Iran, and even the coming arms race. Bush tried to get along but didn't have the "smarts." Obama and Clinton tried but didn't have the energy or chemistry, (remember RESET). PEACE THROUGH STRENGTH!" That was a big two tweeter response by the president.

What's interesting about this, Bill, is not only the call itself and the uproar about it, obviously on all sides you get it, but also this leak about the actual document that we don't know whether President Trump read or didn't read, but the fact that it's out there for you.

BENNETT: Yes, it's amazing. As somebody who had top-secret briefings, I had to leave my office, I was drug czar, go over, sit in the skiff, the White House or executive office building. There has to be very few people, a very small number of people sitting around that table and looking at these documents. So they have got to get to the bottom of this.

I believe there was an investigation started six months ago, a year ago, but I think Sessions or the Justice Department to look into leaks. Do I have this right or wrong? I don't think anything has --

BAIER: It hasn't been resolved.

But can I speak to the congratulations to Putin? Everybody has pointed out that Obama did this, and Obama also congratulated the president of Iran on his. But a little history here. You want to talk about bad Russians, Churchill, I checked my books, Churchill congratulated Stalin on his birthday, God knows one of the worst days in history of the world, the birthday of Joseph Stalin. Churchill did that, the great statesman. I was watching one of the other cable networks and they were highly insulted because they said the president has insulted us and Meryl Streep and Chuck Todd but he won't insult Putin. Maybe the president thinks Putin might be useful for international negotiations in a way Chuck Todd, Meryl Streep may not be.

TUMULTY: But this is at odds with members of his administration. His administration having sanctioned Russia over the election interference, they are trying to project that they are getting tough on Russia. This suggests the opposite. And the fact that this note, this piece of advice, do not congratulate, leaked, suggests a high degree of frustration within the White House over the fact that the president is going one way and the national security team wants to go another way.

BAIER: I would just say this. John Roberts is reporting that there are a lot of livid people inside that White House, including the president, about that particular element of this story.

BENNETT: It may just be one person. How many times did Ronald Reagan -- speechwriters and staff cross out "Tear down this wall." He kept putting it in, they kept crossing it out. It turned out it was a good idea.

HAYES: I think that's part of the story of Russia policy. Set aside the whole Russia investigation stuff, that is really part of a story of the Russia policy under Donald Trump. There was a great "Politico" piece about this by Michael Crowley and Blake Hounshell. There are two policies here. One is a policy that is being carried out by the Trump administration. The other is the policy that Donald Trump, the president, is articulating. The two are at odds with each other.

BENNETT: I don't know, a perfunctory congratulations doesn't seem to me to amount to a full statement of policy. We don't know --

TUMULTY: Except when it's not accompanied by at least a perfunctory condemnation as well.

BENNETT: He speaks through a lot of people. He obviously speaks through his representative at the U.N., and as you pointed out, the number of the things that this administration has done, been a lot tougher than Obama. We shall see. He may need to live to fight another day.