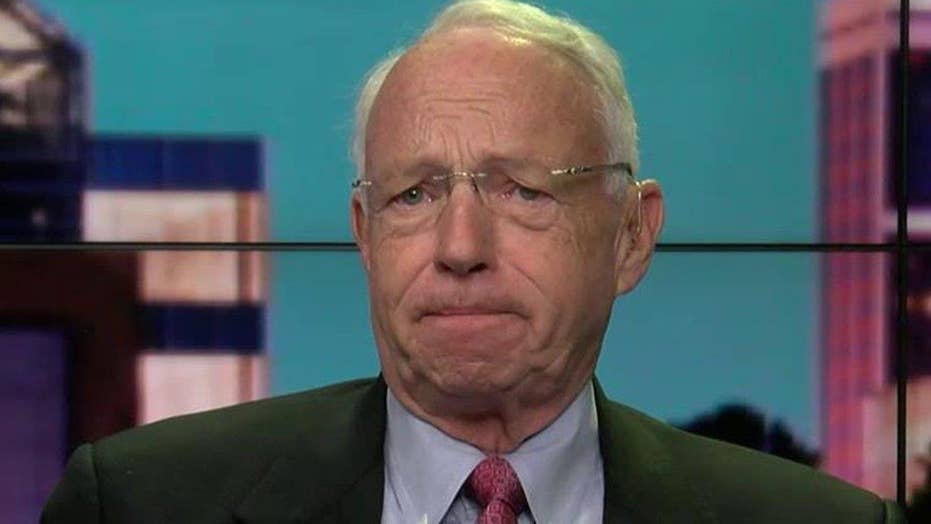 Former NTSB chair: EgyptAir crash could be lesson for US

Former NTSB Chair Jim Hall gives 'On the Record' insight on EgyptAir crash investigation, saying that the search for clues will be like finding a 'needle in a haystack' and that the US needs to take lessons from the tragedy, whether it's terror or not

This is a rush transcript from "On the Record," May 19, 2016. This copy may not be in its final form and may be updated.

KIMBERLY GUILFOYLE, 'ON THE RECORD' GUEST HOST: Breaking right now, a massive international search is on. Investigators desperately searching for wreckage from EgyptAir Flight 804 and the biggest clue as to what dropped this plane down perhaps will be found in the plane's black box.

So how will investigators find that black box in this deep Mediterranean Sea? Joining us Former Chairman of the NTSB Jim Hall, who led the NTSB during the investigations of TWA-800 and EgyptAir Flight 990. Jim, I have been looking forward to speaking to you all evening. Tell us right now, if you are heading up this investigation, what steps would you take and what will be the most important evidence to try to recover?

JIM HALL, FORMER NTSB CHAIRMAN: Well, of course, good investigations are based on factual evidence and that is obtained -- that factual information is in the black boxes which, unfortunately, Greta, are now 3,000 feet deep in the Mediterranean Sea. So the most important thing is to try to recover those boxes. That, of course, is why I have been for deployable recorders that float in the ocean like we have in the military.

GUILFOYLE: Now why hasn't that been the case that commercial airlines have adopted those techniques and measures and have those floatable devices to be able to get the information, recover this crucial evidence quicker?

HALL: It's just been a ping-pong ball at the International Civil Aviation Organization in Montreal. It's opposed by Boeing and supported by Airbus. The Aviation community needs to come together, because we can't have these incidents in this world with so many terrorists without knowing the facts and be sitting here as, we are tonight not knowing. It's unfair to the families and it's danger to all of us that fly.

HALL: Well, you need to remember that the Egyptian airline is an arm of the government. And the government in Egypt goes back, unfortunately, to the days of the pharaoh in which you don't criticize the government and so it made it very difficult when we were dealing with President Barack administration. I'm hopeful this administration will be more forthcoming and more transparent, because these investigations are important to everybody that flies in commercial aviation around the world.

GUILFOYLE: So there is basically two sort of lines of thought right now that obviously this was a catastrophic event that Egyptian airline but they are looking at potentially mechanical failure or an act of terrorism. What clues would point them in one or the other direction?

HALL: Well, the clues, again, and the evidence are in the black boxes. And that, unfortunately, is at the bottom of the Mediterranean. And we will just have to wait. In the meantime, we'll end up with lots of speculation like we hear on all the networks. But, unfortunately, we need the facts because this is a very serious matter. The families that have lost loved ones deserve the facts. And in order to maintain a safe system of aviation safety for all of us, all of us need the facts.

GUILFOYLE: Certainly. So we certainly want to hear the voice recorder and find out if there was a struggle in the cockpit. If there were three air marshals on board. There is highly specialized computerized plane A-320. One that is usually very reliable with an excellent safety record. Jim, I want to thank you for your time tonight.