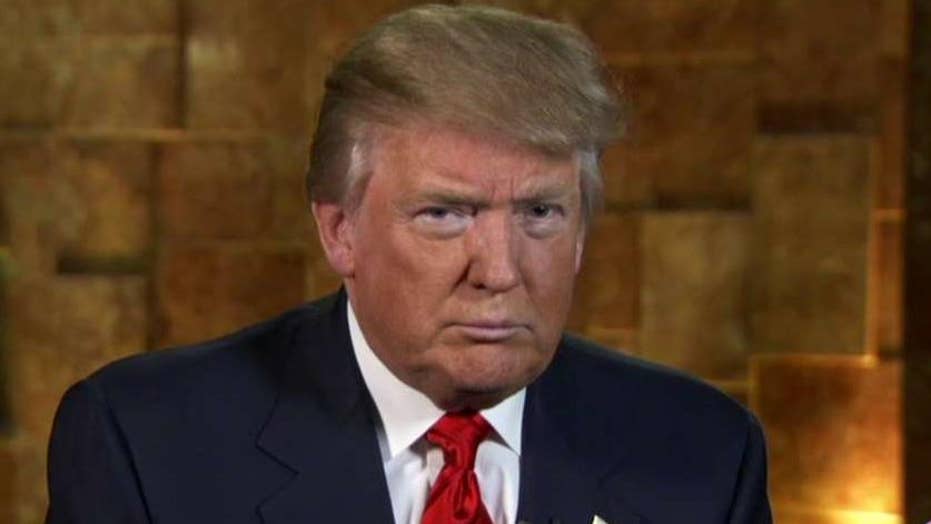 Trump talks China, tariffs and immigration on 'The Factor'

GOP candidate on his strategy for the economy, Muslim refugees and marijuana on 'The O'Reilly Factor'

Specifically -- specifically, how will you fix that?

TRUMP: You know this is my big point I have been talking about it for years.

O'REILLY: I know. But I want to know how you are going to do it.

TRUMP: Listen to me. I will tell you, ok? We are going to have to go -- one of the reasons they are able to do it is they devalue their currency to such an extent. They are the single greatest currency manipulator that's ever been on this planet.

And if they don't stop devaluing we're going to have to charge them a tax on the goods coming in. They, by the way, Bill, just in case you don't know it they tax our goods going into China. It's a totally unfair deal.

Unless we have somebody very smart and very tough that understands it -- and our president does not understand it -- but I understand it better than anybody, we're going to have nothing but trouble.

O'REILLY: So you are going to say to them.

O'REILLY: If you continue to devalue your currency -- I'm going to slap a tariff on all Chinese goods coming into the United States. Ok. They then are going to say to you --

O'REILLY: President Trump, we are going to sell all of our bonds that we are holding for America's debt. We're going to flood the market with them and crash your currency.

O'REILLY: That's what a trade war would do.

TRUMP: Now, they are not -- no, no, no. They wouldn't crash -- they won't crash our currency. They will crash their economy. That's what they are going to do if they start playing that.

O'REILLY: All right. It's going to be bloody.

O'REILLY: That's what I say (inaudible).

TRUMP: We have the cards because they need our economy.

O'REILLY: And that was a good specific answer and I appreciate that.

TRUMP: -- excuse me -- Bill, if they're here illegally they may or may not be. Just like the argument we had about the anchor babies.

TRUMP: In my opinion you don't need --

O'REILLY: -- all settled law says once you're here you are entitled to our constitutional protections, every single case. All right. Just so you know.

O'REILLY: They will block you.

TRUMP: If they are here illegally, I disagree with you.

TRUMP: They are here illegally.

O'REILLY: It doesn't matter. They are entitled to constitutional protections. Obama just got blocked on a, his illegal immigration amnesty and b, in telling the coal companies that you can't have a certain amount of emissions. He got blocked on both of them.

TRUMP: You and I had an argument not so long ago about the anchor babies where somebody comes, has the baby here and they're forever going to be taken care of.

TRUMP: Ok. So, Bill, what you're saying would mean that if somebody just walked across the border, just walked across and they are here for a couple days and border patrol catches them, they can't bring them back, we have to go through a whole long process because you are not right about that.

O'REILLY: All right. Ok. That's what makes our program great. We have a lively debate. You know that. All right.

In Colorado, they legalized pot, ok. $1 billion industry, a billion-dollar a year industry in Colorado. And all of the dealers, all the pushers are going to Colorado, loading up on the free pot because it's legal, not free -- legal and then zooming around the country selling it. Does that concern you?

O'REILLY: What would you do?

O'REILLY: What would you do?

TRUMP: There is another problem. In Colorado, the book isn't written on it yet, but there is a lot of difficulty in terms of illness and what's going on with the brain and the mind and what it's doing. So, you know, it's coming out probably over the next year or so. It's going to come out.

TRUMP: I would really want to think about that one, Bill. Because in some ways I think it's good and in other ways it's bad. I do want to see what the medical effects are. I have to see what the medical effects are and, by the way -- medical marijuana, medical? I'm in favor of it a hundred percent. But what you are talking about, perhaps not. It's causing a lot of problems out there.

O'REILLY: But you know the medical marijuana thing is a ruse that I have a headache and I need, you know, two pounds of marijuana.

TRUMP: But I know people that have serious problems and they did that they really -- it really does help them.

O'REILLY: Ok. All right. Was that fun? Fun interview? Another one? Fun? You like the show better than anyone, right?

TRUMP: It's always a pleasure after one hour sleep coming in from New Hampshire to be on your show. Always a great honor.

O'REILLY: But you still can. You can still can, even though you don't have any sleep. I don't know how that happens.

O'REILLY: Once again, congratulations on the victory in New Hampshire.

Content and Programming Copyright 2016 Fox News Network, LLC. ALL RIGHTS RESERVED. Copyright 2016 CQ-Roll Call, Inc. All materials herein are protected by United States copyright law and may not be reproduced, distributed, transmitted, displayed, published or broadcast without the prior written permission of CQ-Roll Call. You may not alter or remove any trademark, copyright or other notice from copies of the content.