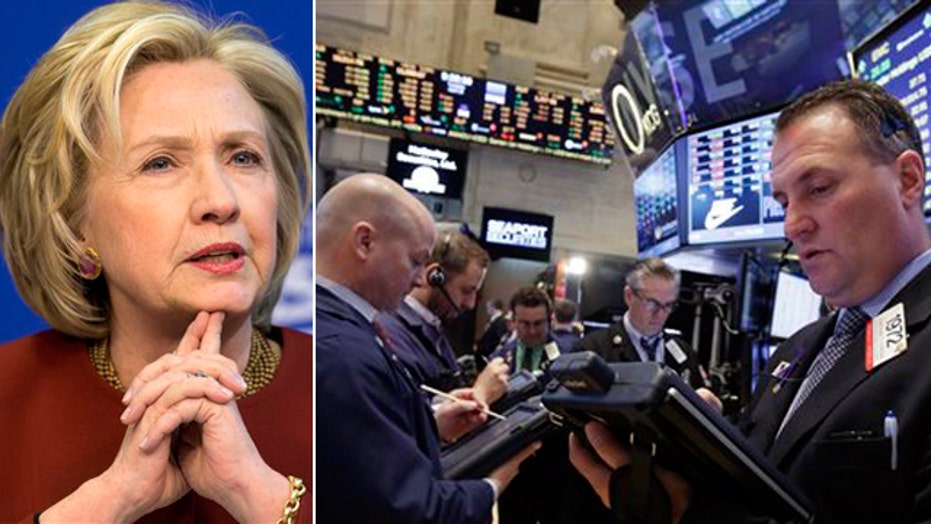 Rich Karlgaard: She is not a $200,000 speaker, what are people paying for? They are paying for access to a possible future president. Pay to play is what Bill and Hillary Clinton have been doing all these years.

Austan Goolsbee: I agree with what she said, we have things riddled in the tax code that makes no sense. My understanding is that Ralph Nader has had a thing out for the Clintons for a long time.

Steve Forbes: It's a form of cronyism. You see it in her support of companies on the green side who couldn't survive otherwise; you see it in the war on prosperity, in the war against the EPA against energy. She will bank the money and go to the populist left.

John Tamny: I think in Hillary's case she is a first rate opportunist and she worships money since money is the path to power. The corporations could be lawn mower corporations; she would hang around them if it meant getting her to the White House.

Sabrina Schaeffer: Interestingly, this is coming from the far left and the right. They are attacking her with the populist messaging. Hillary Clinton is the kind of woman who does what is politically necessary at the time. She is not a Ralph Nader or an Elizabeth Warren- she will do what is politically viable.

Mike Ozanian: I think right now the only thing that will matter- as far as if she gets elected- is whether or not the Republicans- let's not forget George Bush was the biggest spender we had until President Obama- and all of the presidents except Reagan have been crony capitalists. Nixon was... Ford was. We need a Reagan like candidate who can spell out a clear and concise agenda.

Steve Forbes: This is a bad sequel to a bad movie. The U.S. ranks 37th in the world in the rate of home ownership. Let the economy thrive and home ownership will go up.

Austan Goolsbee: Closing costs are too high. If it's not increasing the debt load of the consumers, that would be a good idea. If we just reinvent Fannie & Freddie the way they were before, than shame on us.

Elizabeth MacDonald: These guys are behaving like the boozy bartender at the frat party, giving away free drinks! Why are we turning mortgage finance giants- they are supposed to be in the business of selling bongs- into federal slush funds for housing policy. These guys are so close to Wall Street of course they are going to go off the rail.

Rich Karlgaard: The U.S. for all the support we give homebuyers, we don't have that a high rate of homeownership. We should revisit the idea that homeownership is the great end all be all because what it does is suppress labor mobility which is what is needed in this economy.

Sabrina Schaeffer: Bad idea! The reality is that this is going to come on the backs of American taxpayers who are already are trying to pay their own mortgages or trying to buy their own house or save for something else in their life and they are going to be subsidizing someone who can't afford a home. This is bad news and further distorts the housing market- we should say no to it.

CRITICS ‘DEATH TAX' PUNISHES BUSINESSES AND SHOULD BE REPLACES

John Tamny: It's not only unfair but it's also anti-economic growth. If you want to redistribute the wealth of the rich, the best way to do it is to let them hold onto it. They can either put it in the bank or invest it. This wealth will fund new businesses and new economic growth.

Austan Goolsbee: You failed to mention that in that same poll- once told that it applies to 1/20th of a percent of people, suddenly the support for the estate tax goes way up instead of being a small number. How do you look at the state of the world that one of the biggest problems facing the nation is that the 19-year-old kids of billionaires have to pay too much tax on their inheritance?

Steve Forbes: It ends up hitting the middle class. They don't have the lawyers like the rich have to get around this. It's a waste of capitol. 19-year-olds shouldn't have this money but if it's a Mark Zuckerberg I wouldn't mind him having this money.

Elizabeth MacDonald: This is not a Paris Hilton tax. It hits the middle class and the way of lost jobs. It is immoral what the US government is doing to the tax payer.

Mike Ozanian: This is a morally bankrupt tax.