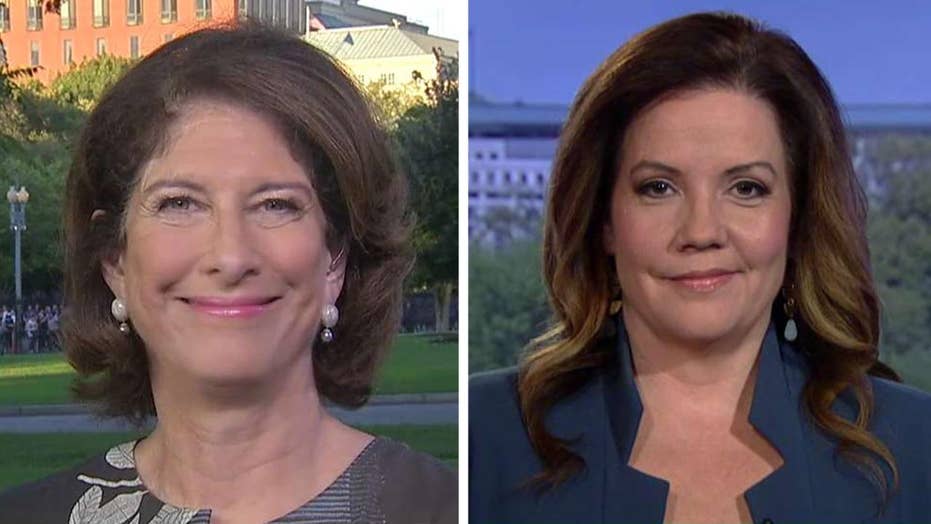 This is a rush transcript from "Special Report with Bret Baier," September 18, 2018. This copy may not be in its final form and may be updated.

SENATE JUDICIARY COMMITTEE CHAIRMAN CHUCK GRASSLEY, R-IOWA: We have reached out to her in the last 36 hours three or four times by email, and we have not heard from them. So it kind of raises the question, do they want to come to the public hearing are not?

SEN. DIANNE FEINSTEIN, D-CALIF.: I think it's really too bad that no one called her or called her lawyer. My understanding is she got emails.

Our side isn't putting this together. The Republican side is putting it together. I can't say everything is truthful. I don't know. But I do know that they've got to contact her lawyers.

BRET BAIER, ANCHOR: The chairman and Dianne Feinstein, the senator from California, talking about this upcoming hearing next Monday. Judge Brett Kavanaugh and the accuser here, Dr. Christine Blasey Ford, and as of now the hearing is still on, although she has not officially accepted that it's going to be a public hearing, although we are hearing from sources that that is the plan still.

Meantime, there are calls from Democrats and others that a third person show up, and that is Mark Judge. Blasey Ford says that Judge is the third person in this room of the alleged assault and he sent a letter to the Judiciary Committee today, saying, "I did not ask to be involved in this matter, nor did anyone ask me to be involved. The only reason I am involved is because Dr. Christine Blasey Ford remembers me as the other person in the room during the alleged assault. In fact, I have no memory of this alleged incident. Brett Kavanaugh and I were friends in high school, but I do not recall the party described in Dr. Ford's letter. More to the point, I never saw Brett act in a manner Dr. Ford describe. I have no information to offer to the committee and I do not wish to speak publicly regarding the incidents described in Dr. Ford's letter."

So where do we go from here? Let's bring in our panel: in our Washington Bureau, John McCormack, senior writer at The Weekly Standard; Mollie Hemingway, senior editor at The Federalist, and with me here at the White House, Mara Liasson, national political correspondent for National Public Radio. Mara, knowing what we know now, where do we go?

MARA LIASSON, NATIONAL PUBLIC RADIO: Where do we go? We wait to find out if Dr. Ford is going to testify in public or in private or at all. That is what we are writing to find out. And a lot depends on if she does testify in public and he does, too, who looks more credible? And that's going to determine how this nomination goes from there.

BAIER: John, what about this call by Democrats for the FBI to be called back in, to open up this background investigation again, which they closed already and the presidents said this nominee has been through six of them?

JOHN MCCORMACK, WEEKLY STANDARD: I think that's a bit of moving the goalposts. Yesterday Democrats were saying this hearing needs to be public when Republicans were saying they can just interview them over the phone. They said that wasn't good enough. They agreed to the public hearing.

I think that if Dr. Ford doesn't show up on Monday Republicans from Susan Collins and Jeff Flake, they are ready to move forward. I think it would be widely seen as a political stunt after Ford's old lawyer yesterday said that she was willing to testify. So to change now, to impose new conditions upon this, would suggest that Democrats real goal isn't simply to get to the truth of this, but it's not even to kill Judge Kavanaugh's nominations. It is to delay it so long that Republicans can be stopped from filling the Supreme Court seat.

BAIER: Mollie, the president could pick up the phone and say to the FBI, you know what, let's check this out. Right?

MOLLIE HEMINGWAY, THE FEDERALIST: There's a couple of issues in play. One is that whether the Senate or even the FBI is the best place to litigate allegations of sexual assault, I believe there is no statute of limitations on felony sexual assault in Maryland. The local law enforcement could handle this if that is how it is intended.

But I don't think that people actually want to come to truth or justice, and they're unable to do so in the Senate. So a lot of what is happening is, as was just pointed out, delay. There are ways that Democrats said they wanted an open hearing, they got an open hearing, and now they claim they want something that would take an interminable amount of time because it is impossible, of course, to determine the truth -- the truth of the falsity of this allegation. It is impossible for the senators to do it in a hearing and it would be largely impossible for anyone to do it 30 some years after the fact.

BAIER: Here is Senator Kennedy from Louisiana earlier on Fox:

LIASSON: It's going to be explosive. Look, the White House is walking a really fine line. They want to get this nomination through. At the same time, they don't want to anger suburban women any more than they are already angry, and they don't want to make it harder for people like Jeff Flake or Lisa Murkowski or Susan Collins to vote for this nominee. So they are still being, for the most part, really careful and respectful about how they talk about Dr. Ford. You heard Kellyanne Conway call her Dr. Ford. The president actually called her "that woman." But they are walking a very fine line. They've got to do the politics of this right, and they've also got to do the truth seeking of this right.

BAIER: Kellyanne said she didn't care about that all the Republicans on the committee were white men, but the optics of the questioning --

BAIER: It factors in.

LIASSON: This is happening in the Me Too era less than two months before a really important election where women are the key voting block. So yes, it does matter.

BAIER: Mollie, you said it's not the right place to litigate it. But we are where we are. What are Republicans going to do, probably get somebody else to do the questioning?

HEMINGWAY: I'm not sure if that would be good. I thought actually Senator Susan Collins had a good idea today when she said that attorneys for both Dr. Ford and Brett Kavanaugh could interview the opposing party and that that might be better. I'm not sure if senators are well-equipped to handle this. It is a very sensitive issue.

I think, though, it's not just that Republicans have to worry about it, given the sensitivities, but everyone needs to worry about weaponizing Me Too on weaponizing that moment and politicizing it. It's very important that women not be victims of sexual assaults. It's also important that we honor due process and that we use the appropriate means to litigate allegations of assault.