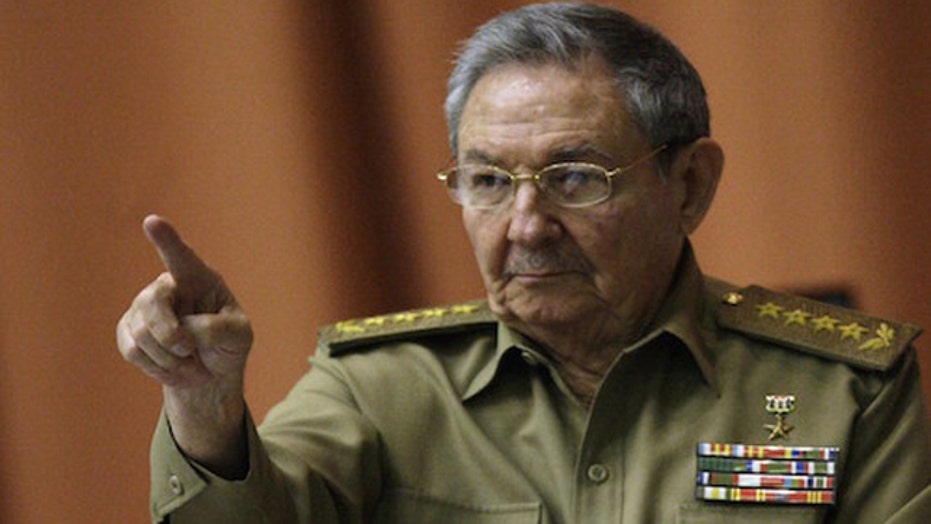 Cuba demands money from us and return of Guantanamo Bay

CUBA DEMANDING MONEY FROM U.S. AND RETURN OF GUANTANAMO BAY

Charles Payne: I guess we've emboldened the guy, right? I don't understand this I'm a boxing fan. If I'm watching a fight and a guy sees another guy for nine rounds and the tenth guy the guy winning falls on the campus, of course this guy Raul thinks he is winning and making demands. I would, too. We turned this upside down. We beat them.

Why does president Obama now back over backwards? I would keep asking for stuff, Castro.

Charlie Gasparino: Could you imagine Ronald Reagan being given this ultimatum after he got off the floor dying of laughter, he would say no.

Dagen McDowell: One, we are going to send them potentially massive amounts of money in the tourist traffic that will be heading south to Cuba. I hate this normalized relations with Cuba. We actually collect pre-revolution like Cuban glasses from the casinos down there.

Ben Stein: This is a pay-off to Obama's old lefty buddies who always loved Castro. The whole thing has no economic significance. It's a way of him saying to his old lefty buddies from long, long ago, community organized community based, see, I kept my promise to you. I'm going to be easy on Castro. Make friends with Cuba. Count on me. I'm still in there with the brigade. There is no -- the idea Cuba is asking us for anything after the way they seized U.S. Property, after they tormented the families of people in the united states from Cuban heritage, it's almost unbelievable.

Ben Stein : Mr. Obama believes Americans are going to change, become a more Hispanic country. He is not going to fight it. Maybe even wants it. Maybe likes it. The whole character of America is going to change. I don't think necessarily for the worse. I just say we in southern California have a great many Hispanic immigrants. They are the salt of the earth. They are incredibly hard-working, wonderful people. Though I these are awfully good people to have working in America.

Charles Payne: We already rolled out the red carpet. Come on in.

Charlie Gasparino: It shows you how the Republican Congresses were talking about defunding. How do you defund this? This is plain and simple. The president writes the rules on stuff like this. The border agents have to follow it. It just shows how powerful the President is on matters of this nature.

Dagen McDowell: This should not fall or immigration agents. It's up to immigrants and their attorneys if they qualify for this program. It's like telling me and IRS agents telling me to have children because it would be a great tax deduction for me if I had kids.

Adam Lashinksy: I think you brought up a good example. I completely disagree with you. It would be the right thing to do for the IRS to have some system where they pointed out to you, hey, you are entitled to a deduction. You should take it. That's what the law is.

Charles Payne: It's another one of these taxes that gets out of control and I think ultimately hurts poor people a lot more than rich people. I mean, in New York City the richest people often get driven to work or they live so close to work they can walk there. Rural areas people might drive a long kiss and to get to their job at Walmart or somewhere. I think it's backwards.

Dagen McDowell: It actually hits the levity liberals who are driving electric cars. Then you're not paying any money to fix the roads in your state because you don't pay think gas tax.

Ben Stein: Do you know what, government -- we don't want government stepping into our lives any more than it already is. Especially here in California.

Adam Lashinsky: he gas tax was a fair way to pay for the roads but it's not working because we won't raise it. This is a perfectly fair way to approach it going forward.

Charlie Gasparino: I want the ding bat wing of the group to make a couple points. Number one, I'm with ben on this, we're got dingbats, but number two isn't it odd that we are they're doing this just as the entire middle class got a big tax can cut.