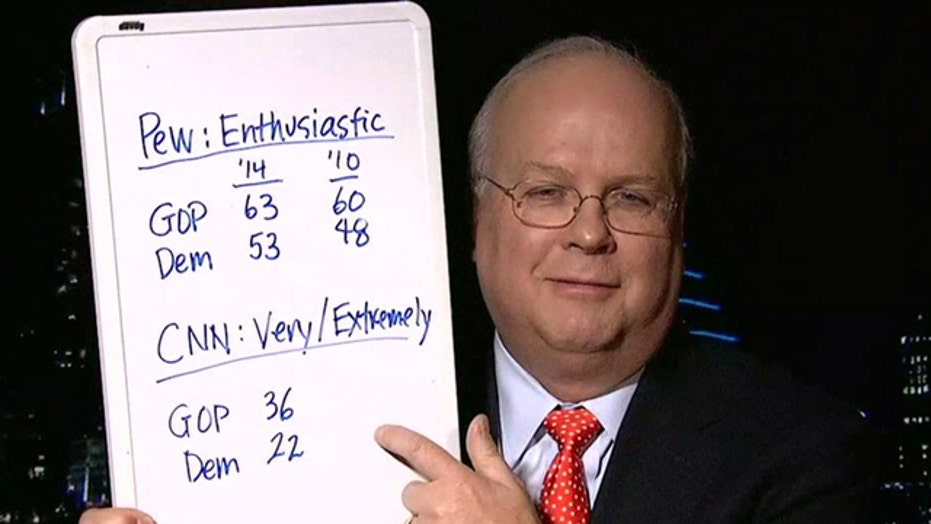 Karl Rove on what 2014 elections will mean for Republicans

Why job approval, economy will be big factors

This is a rush transcript from "Hannity," January 8, 2014. This copy may not be in its final form and may be updated.

SEAN HANNITY, HOST: Renowned political scientist Larry Sabato came out with a bold prediction about the 2014 midterm elections and what they're going to mean for the Republicans and the country. He wrote in part, quote, "I'd argue that three factors are paramount. The president, the economy, and the election playing field, and at least preliminarily those three factors seem to be pointing toward Republican gains in both houses in the 2014 midterms."

Here with his trusty, incredible, expensive whiteboard to tell us whether or not he agrees with that prediction, Fox News contributor, the architect, Karl Rove. Sir, how are you?

KARL ROVE: Fabulous. And they're not expensive. They're inexpensive.

HANNITY: It's the latest high-tech thing.

HANNITY: First we'll start with the Real Clear Politics average. You've done some analysis. You've got big Senate races this year everyone is going to be watching.

ROVE: Right. You know, look, the Real Clear Politics average shows the Democrats with just less than a half a percent lead on the generic ballot. But I think Sabato is right about three big things that affect elections, the first being the president's job approval. The job approval today is in the low 40s. I remind you in 2010 on the eve of the election it was 45. And that is when the Democrats lost 63 seats in the House, six seats in the Senate. Bill Clinton in 1994 was at 48 just before the election in which they lost 52 seats control of the House and eight seats in the Senate.

So I think job approval is the biggest factor. I think Sabato is absolutely right, the economy is a factor, mainly if it's more, if it's bad. And if it's, even if it starts to be a little bit better, the question is how much do people credit the government with being responsible for it, and how much do they feel it in their individual lives. And we know people do not feel good about the economy as it's affecting them in large part because of the either perceived fear of ObamaCare and the actual reality of ObamaCare.

So there are conceivably 40 Democrat seats in play and maybe somewhere less than 15 Republican seats in play. And that's in the House.

In the Senate the Democrats are in deep trouble. There are seven Democrats --

HANNITY: Where's you whiteboard? I'm listening to you. There is no whiteboard.

ROVE: We're leading up to the whiteboard.

HANNITY: I'm waiting for the whiteboard.

Here is one of the important things that -- Sabato alluded to this, but I think this is also an important factor, how enthusiastic are each parties participants in voting? Pew did a survey, and 63 percent of Republicans said they were enthusiastic about voting in the midterms, 53 percent of Democrats. This is what it was at the same point in 2010 -- 60, 48. In fact CNN did a survey and asked are you very or extremely enthusiastic? And 36 percent of Republicans were very or extremely enthusiastic about voting this time, only 22 percent of Democrats. That shows that the energy on the side of the president's political opponents.

HANNITY: All right, now, but because of gerrymandering, especially in the House there is probably a limit in terms of how many seats are going to be up for grabs in the House. What about these Senate races we keep talking about and these red state Democrats?

ROVE: Think about this. There are seven red state Democratic seats up for election. In three of those the Democrat has already pulled a ripcord, West Virginia, South Dakota, and Montana, because those states were won by Mitt Romney by double digits. Democrats are remaining in the races in Alaska, Arkansas, Louisiana, and North Carolina. President Obama lost North Carolina by two points and lost the other three states by double digits. Those races are going to hot.

But those aren't going to be the only contests out, because remember, in 2010 when the Republicans picked up six seats, which is what they need to pick up this time around, Republicans picked up seats in purple states like Pennsylvania and Illinois. And we have races potentially in Minnesota, Michigan, Virginia, and New Hampshire in purple states that could broaden the field.

ROVE: Al Franken is up, open seat in Michigan. Look, there is talk about former Senator Scott Brown of Massachusetts, born in New Hampshire --

ROVE: -- running in New Hampshire. And the Democrats are already spending money on New Hampshire TV to attack Scott Brown who has not even made a decision about whether or not he's going to be a candidate. That shows to me they're really worried about Jeanne Shaheen and what kind of a challenge he would face if they were to get in the race. And then in Virginia we've already seen, Senator Warner, who was invisible, is doing things like calling and saying I want to be on FoxTV because he's worried about the challenge from Ed Gillespie who is seriously thinking about entering the contest.

HANNITY: Gillespie would be a good candidate. Interesting guy. And he's been very active in Virginia politics a long time, a lot of connections.

All right, Karl Rove, thanks for finally sharing the whiteboard with us. We appreciate it.

Eric Bolling's is bigger, just as a side note. It doesn't mean anything.

ROVE: It's a comment on Bolling's lack of self-confidence that he has to show up with a bigger board.

HANNITY: Big Twitter fight coming. Karl Rove, thanks for being with us.