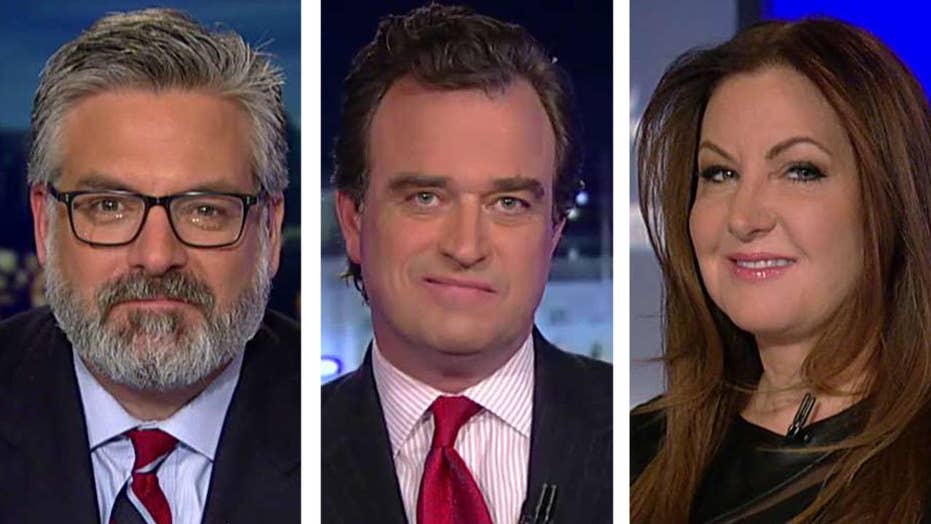 This is a rush transcript from "Special Report with Bret Baier," December 15, 2018. This copy may not be in its final form and may be updated.

PRESIDENT DONALD TRUMP: I think it's going to do very, very well. I think that we are going to be in a position to pass something as early as next week which will be a monumental.

SEN. ORRIN HATCH, R-UTAH: I think it will get worked out one way or the other, but it's going to take good faith on both sides to be able to do it.

SENATE MINORITY LEADER CHARLES SCHUMER, D-N.Y.: The tax reform bill is a disaster. It helps the wealthiest, most powerful corporations and individuals, and it hurts the middle class.

REP. KEVIN BRADY, R-TEXAS: I think maybe the most important element people aren't yet thinking about is this April 15th when you file your taxes, that is the last time you will file under this monstrous, broken tax code.

BRET BAIER, ANCHOR: Well, it's in. It's done. They've finished the negotiating and it is locked in stone. Right now the bill has been filed, the tax reform bill in the House expecting a vote early next week. And here are the details. We put them up before, seven tax brackets, top rate individually at 37 percent, taken that down from 39.6. Doubles the standard deduction for single filers and married couples, lowers the corporate taxes. We talked about the 21 percent, that begins January 1st, 2018.

You have a continual right off for state and local taxes up to a certain amount, expands the child tax credit, that was a sticking point. Eliminates the corporate AMT, continues the charitable deduction contributions, provides immediate relief from the death tax, or the estate tax, by doubling the amount of current exception. Eliminates the Obamacare individual mandate penalty tax.

Today we heard from Senator Marco Rubio and Senator Bob Corker who were saying that they were no's and they are now yeses, and that changes the entire math. Let's bring in the panel: Steve Hayes, editor in chief of The Weekly Standard; Leslie Marshall, syndicated talk radio host, and Charles Hurt, opinion editor for The Washington Times. Long time coming, Steve, this is finally in stone. And it seems like the momentum is unstoppable right now.

STEVE HAYES, THE WEEKLY STANDARD: It seems like that. Of course we thought that before and the obstacles have presented themselves. I think nobody is happier about this then Charlie Hurt who finally saw the top rate go from 39.6 percent to 37. I know you want to bring it down even further.

I think this is overall for Republicans, this is important for a couple of reasons. One, it will likely have some economic benefits. This is what Republicans have argued all along. They disagree about exactly what the economic benefits will be and how stimulative it will be in the short-term, but there will be some stimulus.

And two, of course it gives Republicans something to take to voters. And that's going to be very important. I think the inclusion of the expanding child tax credit that Marco Rubio and Mike Lee fought for really all along but made a hard push for starting beginning this week and meeting with Senator McConnell, Marco Rubio made the case and said he was going to be a no. It turned out to be a threat that he intended to carry out, and won the argument, won the battle. I think that's going to be helpful for Republicans as they make a case that this is something for families and the middle class.

BAIER: And that debate played out today, Senator Portman and the president on this.

SEN. ROB PORTMAN, R-OHIO: In terms of the child tax credit, I think you'll see some improvements there for folks who are the lower end of the economic ladder. So I think it will be a very popular bill, and among our Republican colleagues I think we'll get the votes.

BAIER: So it goes to $2,000 and now up to 70 percent for the lower income can essentially be paid out off of this.

LESLIE MARSHALL, RADIO TALK SHOW HOST: Again -- look, there is some stuff in here that's good. Certainly stuff that's in here that's good for, you know, my husband and certain people in certain tax brackets. I don't think it addresses all of the concerns that the middle-class, especially the blue-collar working class that put Trump over into that White House with their vote. What do they want? They want jobs, they want to see money in their fists. They're not getting a check that's cut for $2,000. That's a whole different story when you break it down over 12 months.

And when you look at the deductions, they are for the rich. What type of people are itemizing their deductions? Lower and middle-class Americans in this country aren't doing that. So I don't think it's going to help them in the midterm collections. I don't think the child tax credit is enough. Not just that. In addition to that that polls just show it's not as favorable to the American public. And at the end of the day, this is, hey, look, we finally did something for Republicans, but how much of it is politics so they can't even really pay for this, versus in the best interest of their constituents?

BAIER: On the public polling, it's pretty complex to tell in an elevator story. If by the time you get to 2018 and it sinks in in February or March and the economy is rising further than even it is now, that one would think that would have benefits across the board.

CHARLES HURT, WASHINGTON TIMES: Absolutely. And of course the reason it's so complex to explain in simple terms in the first place is because the stupid tax code is so freaking impossible to understand in the first place, and very wealthy people have to hire people to come and suss it all out.

BAIER: I love your passion on this.

HURT: It's unbelievable. But I do think -- but I do think you're exactly right. If at the end of the day this does help the economy and those people do get some of those jobs and all you have a hard Democrats sitting on the sidelines and talking about class warfare, even though their economic improvement, situation has improved, and talking about Russia, Russia, Russia, I think it has a tremendous impact.

BAIER: To that point, a little montage of the president interacting with the press on the south lawn this morning.

TRUMP: It's a shame what has happened with the FBI. But we are going to rebuild the FBI. It will be bigger and better than ever.

There is absolutely no collusion. That has been proven. My worst enemies, they walk out, they say there is no collusion, but we will continue to look.

It was great. He said very nice things what I've done for this country in terms of the economy. I don't want to talk about pardons of Michael Flynn yet. We will see what happens. Let's see.

BAIER: a lot of coverage today about not a pardon yet for Michael Flynn, no collusion, absolutely no collusion, which he said before, and following up on the FBI. And then he want to deliver a speech to the FBI which he praised heartily.

HURT: The remarks he made to the agents and the people that work hard every day to carry out the mission of the FBI couldn't have been more complementary and positive. And so he left all of his stinging rebukes for the upper echelons of the FBI on the White House lawn, which I thought was probably a smart way of handling that.

MARSHALL: They weren't in the audience, right? At the last minute, there was not enough room. You guys can stay, not that they were going to come anyway. Look, I think the whole email thing is stupid. I think it was stupid for the two people to be corresponding like this.

BAIER: You mean the texting?

MARSHALL: Yes, text messages, emails that they had to one another. The reality is that whether we work inside the beltway or outside, we have opinions, and we have political opinions and political leanings. And there are a lot of people I know, even Republicans who don't favor this president or some of the things that he says, but these individuals also bash Democrats, Eric Holder, Chelsea Clinton, the list goes on.

The problem that I have with what we saw the montage and other things that the president has done is do you believe in then or do you believe them now, right? Because he's rebuking the FBI and then he stands there in front a law enforcement and talks about what a great law enforcement team as we have in this nation, as we do, and forgetting the FBI is part of the great big law enforcement team. The same thing with Roy Moore. I backed the guy. He denies it. He said he didn't do it. I backed the guy, rather have a Republican, you've got to concede. He flip-flops.

BAIER: He already made the call to Doug Jones to congratulate him on his win. Steve?

HAYES: I think the issue with the text messages is whether these private views, which I think virtually everyone agrees they are allowed to have, affected their judgments or their actions in carrying out the responsibilities as public servants. And I think there are texts that suggest they might. It's worth looking into.