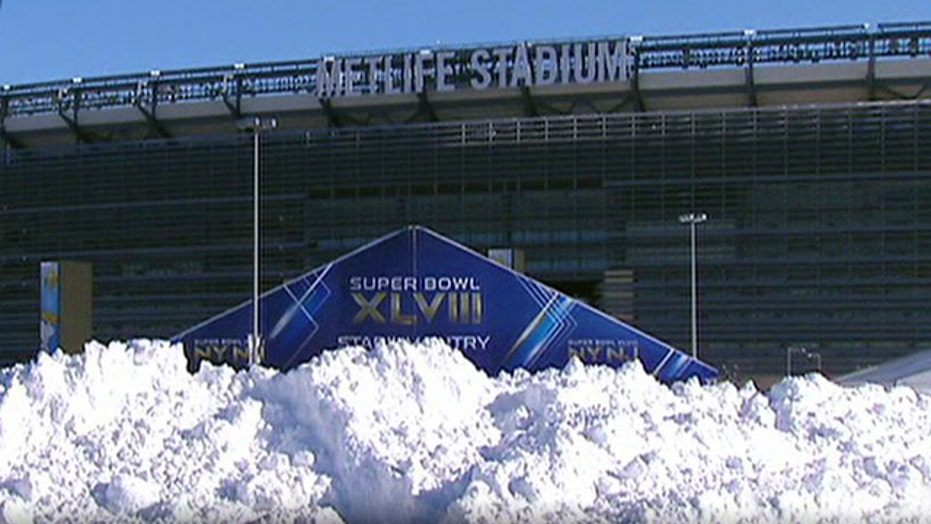 Challenges facing the NFL for the Super Bowl

How frigid temperatures may impact each team, fans

This is a rush transcript from "Hannity," January 22, 2014. This copy may not be in its final form and may be updated.

SEAN HANNITY, HOST: Now, keep in mind this is going to be first outdoor cold-weather Super Bowl ever played. So as Metlife Stadium in New Jersey clears the snow and gears up for its Super Bowl debut and the Denver Broncos prepare to take on the Seattle Seahawks, well, what do the frigid temperatures and the snow mean for each team in the game?

HANNITY: ... I was a fan of yours for many, many years. If it's 10 degrees below zero, you're the quarterback, what -- if it's snowing, what does that mean for the game, unpredictable?

THEISMANN: It is unpredictable. First of all, I'd like to congratulate you on your choices of the two participants. I would be remiss if I didn't congratulate you on our last discussion, when I picked New England and San Francisco. So that being said...

THEISMANN: I know you weren't, but I thought I'd take care of that. But congratulations on good choices.

THEISMANN: I -- from a temperature standpoints, guys play in Green Bay, Wisconsin, where the temperatures are sub-zero. The players are used to it. The plays deal with the weather when it's cold. It's wind that's a big problem for quarterbacks. I don't care who you are, wind affects you.

So the players can deal with it. My concern and my greatest concern is for the fans that have looked so forward to this great event and not be able to really enjoy it but to worry about exactly what they're going to need to wear, what they can take, what they can't take, and all the logistical nightmares that go around this game.

HANNITY: All right, let me show you -- I mean, we're showing some pictures here. We've had some incidents at stadiums where snowballs are being thrown at the players. I guess they're going to have to worry about that. We got a picture of Tom Brady on the ground after being sacked in the famous snow Tuck rule. Remember that came in there?

GRAY: I don't think it's going to be an issue at all. They're going to play. But the stadium, as Joe just said, it's a very windy place. Out there in the Meadowlands, that's always been the issue and that's going to harm, in my opinion, the offense of the Denver Broncos because they're much more reliant on the passing. And it's an old school game with Peyton Manning, and he has those just terrific receivers and he set all kinds of records this year, NFL records that may not ever be broken, they're so far out there. And I think it will hurt him.

As far as the Seahawks are concerned, they played in the rain. The Broncos play in the snow. The teams will be used to it. But I think the wind is going to be a big, big factor. And as far as the fans, they'll have that all cleared out. It can snow, if it does snow, and they'll be working all night. There won't be any snowballs being thrown in that stadium.

HANNITY: Well, I got to tell you -- I don't know. Joe, help me out here. How does Peyton Manning wear a glove on his throwing hand? That -- that, to me, seems -- would make it more difficult, no?

THEISMANN: It isn't just -- it isn't just Peyton. We see so many guys -- we saw Andy Dalton (ph) wear it. You see Tom Brady wear it. They have come so far. I never wore a glove, but they've come so far in the development of the tackiness of the gloves that quarterbacks now, when the weather gets a little colder, even a little wet, they're very uncomfortable if they don't use it. So it has a stickiness, a tackiness to it that just gives them a little bit more security, especially when you're throwing the football around in a stadium when the weather is like it is.

And Jim mentioned it, and I think that wind will be the biggest key. You hate to see weather be an issue, and guys play in it all the time, as I said. But from a glove standpoint, we see receivers wearing it. It started with the receivers. Now many of the quarterbacks in inclement weather decide to use it because you can hold onto the football a little bit better.

HANNITY: All right, Joe, everybody probably -- I refuse to show this because it's so brutal. You had a career-ending injury that was caught on television. So now let's say there's snow or there's ice and it makes slippery conditions for running backs, quarterbacks. Risk of injury -- is that something that they've got to be concerned about?

THEISMANN: I don't think the risk of injury is any greater than it is normally in a game. I mean, take the Philadelphia Eagle-Detroit Lion game this year that was played in 8 inches of snow, where LeSean McCoy set a rushing record.

I still believe that offense has a bit of an advantage in inclement weather because they know where they want to go. Defenses have to react to it, and they can't react to it quite as quickly.

From an injury factor, you're probably not moving as fast. You're not going to be able to put as much impact into the hits. So I think it's a moot point when it comes to the injury factor.

HANNITY: All right, Jim, let's talk a little bit about, as we move forward with this game, and what about your thoughts on the injury side of this? Are you concerned?

GRAY: I don't think so. I think that these guys, this is the biggest game of their life. They're going to play all out. The injuries happen in professional football. We saw last week there was a stop at almost virtually every play in the second half of both of those games. Guys are going down. They're laying it all on the line. But I don't think it'll be any different because of the weather.

I think that Joe's right, there's a little bit more caution that you have to use with the weather if the ground is slippery, if it's icy, if it is snowing because your footing just isn't quite the same. So that may just take a little edge off some of the speed, but I don't think that injuries will be a factor.

HANNITY: But it's also -- we got to be fair here because there are heated benches. There are -- there's heat on the sideline, right? So these guys have a chance to warm up, if they want to, right?

GRAY: ... Sean, they had coils in the stadium in Denver. You know, there's coils underneath that grass so that, you know, it heats it up, much like they have some -- in some of the greens that they play golf on, some of the drainage, and so forth. So I'm not exactly sure of the Meadowlands, but you know, George Tollman (ph), the people who take care of the field, if it's still George or whoever handles the field now for the NFL, they have it just exactly right. It's not going to be an issue unless there's a huge storm that day.

THEISMANN: I'll work with you as much as I can, Sean.

HANNITY: I need all the help I can get.

THEISMANN: I'll give you a chance to be able to improve.

HANNITY: I need all the help I can get. All right, predictions. I'm going with the Broncos. I'll go first. Who do you got?

THEISMANN: Me? I've got Seattle. I think the weather is going to be a factor. Seattle was the number two team in the league when it comes to throwing the fewest passes. I don't think a lot are going to be thrown. And I agreed with Jim when he said that if there's an issue with weather and wind, it's a problem for Denver, so I'm going to lean with Seattle.

HANNITY: All right, who you got, Jim?

GRAY: Well, the top defense, when they've been in this position, has won, I think, 15 times out of 17 that the number one defense has been in the Super Bowl. So that would lean toward Seattle.

But I'm from Denver, Sean. I grew up in Denver. My dad was an original season ticket holder. They still have their seats, so my heart says the Broncos. But I think it's going to be a great game. I think you go the number one offense against the number one defense, and hopefully, the weather won't impact it.

HANNITY: I'm six for six the last two weekends. We'll see, Joe. We're on. Bets on. And I get a free lesson in throwing -- here, just in case. There we go. So we'll be watching. Thanks, guys. Appreciate it.