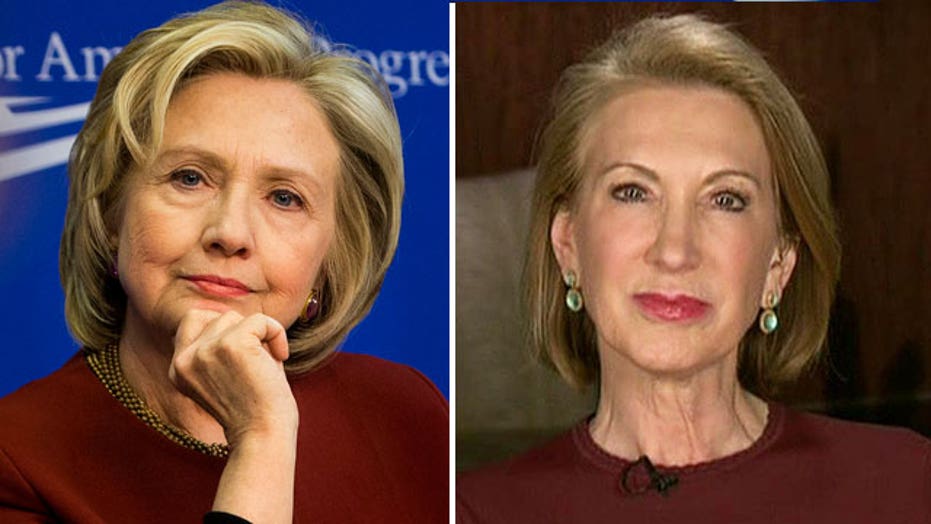 Carly Fiorina blasts Hillary for hiding from the press

This is a rush transcript from "Hannity," May 13, 2015. This copy may not be in its final form and may be updated.

SEAN HANNITY, HOST: Welcome back to "Hannity." Get this. It's been 22 days since Hillary Clinton has fielded a question from the press, and she's yet to do a sit-down interview with a national media reporter since announcing her candidacy for president on April the 12th.

Let's put this into perspective. Former Hewlett-Packard CEO Carly Fiorina -- she announced she was running for president on May the 5th.  Since that day, by our count, Fiorina has now done 21 interviews. Again, Clinton zero.

As for the number of questions fielded by reporters, Fiorina has taken 322, and just 8 at that flimsy press conference for Hillary Clinton.

CARLY FIORINA, R-PRESIDENTIAL CANDIDATE: You think? Well, you're right, she is hiding. And the only thing that heartens me about all of this is The New York Times has this new regular feature called "Questions we would ask Hillary Clinton if we only had the opportunity."

But you know, Sean, as you and I have talked about before, she's going to get away with a lot until and unless we have a nominee who won't let her get away with anything.

HANNITY: You know, it's amazing -- we sit -- there was a -- there was a team of reporters that went out there, and they actually asked questions about Hillary. This is amazing, how little people really know about her.  I want you to watch this and react to it.

UNIDENTIFIED MALE: As senator, Hillary Clinton paid women 72 cents for each dollar that she paid men.

UNIDENTIFIED FEMALE: Really? She really did that?

UNIDENTIFIED FEMALE: I don't even know what to say right now. I'm kind of shocked.

UNIDENTIFIED FEMALE: If she's for equal pay, then why did she do that?

HANNITY: Every one of those people first said that they were for her, voting for her. They know nothing about her! Pretty amazing that she's in hiding like this. Your reaction?

I mean, there are a whole series of questions that she really doesn't want to answer, and so she is hiding.

HANNITY: You know, it's interesting how the media is attacking you personally. I was watching one of the Sunday programs this Sunday, and it's as though, Oh, she's not going to be president, but she can attack Hillary because, basically, you're not a man. And I felt that was sexist.  What was your reaction to that?

HANNITY: You know, considering the war on women was such a big issue in the 2012 campaign, this is now -- you got an intramural battle within the Democratic Party, where Sherrod Brown and National Organization for Women have accused President Obama of being sexist for his comments about Elizabeth Warren, who is opposing this trade deal.

And he actually went on to say, Well, the truth of the matter is that Elizabeth -- he didn't say senator -- a politician like everybody else, she's got a voice she wants to get out there, I understand that now. And Sherrod Brown said it's sexist.

Are we sensitive to the word? Is that appropriate in this case? I wanted to get your reaction.

Unfortunately, these words get politicized, and the word "feminist" got politicized by the National Organization for Women, and NOW is clearly a political organization. They want to put forward a particular political agenda.

So for example, Hillary Clinton during the 2014 elections said when she was campaigning against Joni Ernst for Bruce Braley -- she said, Well, it's not enough to be a woman. You have to be a woman who believes, and she then went on and listed the liberal orthodoxy.

HANNITY: It's amazing. I thought your definition was probably one of the most interesting I've ever heard. Let me ask -- all the candidates now are being asked -- and I haven't seen your answer, so if you've been asked this before, forgive me. Knowing what we know now about Iraq, what's your answer? What would you have done?

HANNITY: All right, Carly Fiorina, we look forward to seeing you again soon. Thanks for being with us.