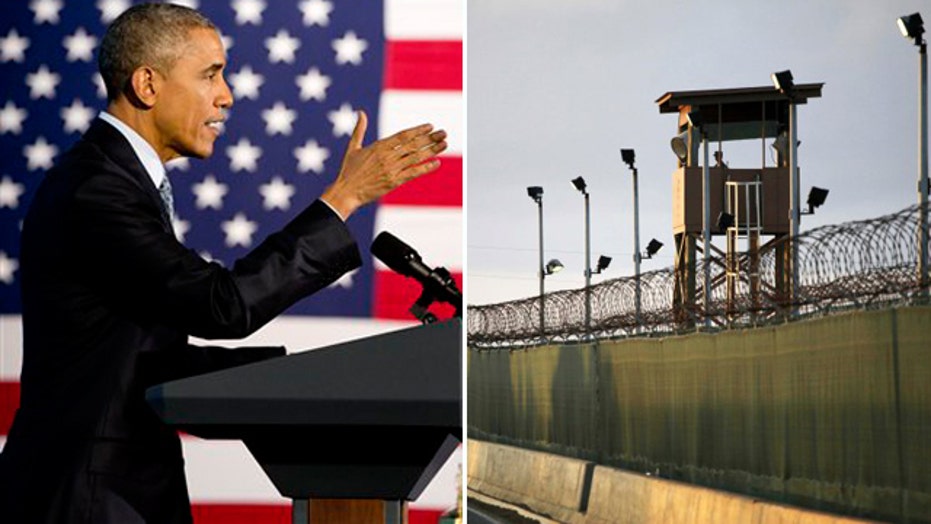 Can we afford to close Gitmo?

President Obama says we can't afford not to

Ashley Pratte: It's astounding but something we can come to expect from this administration. He says his biggest regret is not closing Gitmo on day one because of costs. Yet let's throw more money at the problem like we always do. Is that going to stop jihadists from beheading Americans or anyone else that we see in these predicaments? We've seen anti-Semitism coming from them yet we can't call the problem what it is, radical Islam. We've yet to see anything denouncing from the administration. Yet, let's keep throwing money and hope when they have jobs and more foreign aid the problem will stop instead of actually defining our enemy.

Chuck Rocha: I agree we should shut down Gitmo. Like he said from the beginning. I've been disappointed it hasn't been shut down. This problem ain't new. This ain't Johnny come lately. They've been fighting each other a long time. We threw a hornet's nest when George Bush went in having this big war, now we are supposed to fix this problem. That's the problem i have, this is a world problem and we should not be trying to fix the world's problem. We should get help from lots of people. We can't just walk away from it and hope a bomb don't come up on our shore some day.

Gary B Smith: I want to come at it from a different perspective. President Obama says we can't afford Gitmo. Get more costs about $500 million a year. Foreign aid is $30 billion. Our defense budget is $600 bill. For 5 percent of the total defense budget, we can certainly afford Gitmo and the foreign aid. In fact, when it comes right down to it, waste and defense, we just lost $500 million the cost of Gitmo of weapons and supplies and stuff in Yemen that the defense department can't claim. The whole argument is idiotic.

John Layfield: It's going in the wrong hands for quite some time. To chuck's point about it being a problem there for a long time, according to the bible when only four people were there, one killed another one. They have been fighting for quite a long time. President Obama said he left a sovereign and stable and self-reliant Iraq. He did not tell the truth. We had to go into Iraq and restart the war. 1982 We took Iraq off the state-sponsored terror list to fund the Iraqis against the Iranians, hence funding Saddam Hussein. President Obama, our noble peace prize-winning president waived the human rights provision where we can fund terrorists to fight other terrorists. They are worst terrorists. We are funding the second worst bad guy we deem in the Middle East right now. This is a policy that's been in the past and it is right now.

Jonas Max Ferris: We can afford almost anything. American afford to have a war that costs ten times as much as the Iraq war if we really had to and it was really important. World War II called more and we could borrow $10 trillion if we had to. Gitmo, we could have 100 Gitmo. Does it make sense to spend a dollar on it? Gitmo isn't cost-effective even though we can afford it. It's too much money per person who is in there. You could pay for a stay at the Ritz Carlton with a navy seal guarding over them for the same money. We can afford to give a lot of money to the Middle East. The cheapest way is to just put another dictator up there. It's not moral, but it's their problem. They have access to the oil, they can steal the oil, we can't. It makes economic sense for someone else to have this problem in their back door, not America send money with no way to make money from the area like you would in the past maybe. I don't know.

John Layfield : This is absolutely nuts. Our prison system, we incarcerate too many people. We have an intercity kid with a drug charge that can't afford a good attorney ends up in prison way too long. You talk about illegals that come here. This isn't about immigration. They broke the law to come here. If they break the law here, a lot were DWIs, they are endangering other people. Send them back home. If you are going to release people because of overpopulation, why release a person that is not even an American first? Release some of these low-risk drug offenders, see if they can make something of themselves. To give them right over American citizens.

Chuck Rocha: The numbers bear out they are lower. Back to john's point the biggest majority were DWI's. 1 percent were violent criminals. I'm the biggest immigration right activist you would ever have on this program. I'm here to tell you this is an example of the broken system. I will never say it's going to be good to put violent offenders back on the streets. These people should be sent back. He said we want to make sure people are united with their families, not felons. This blows my mind.

Gary B Smith: Some of the people as chuck and john pointed out are probably okay to go, but chuck makes it part like this is a problem with the system. It's not a problem with the system. The problem is with inept government once again. This is a DHS , department of homeland security problem. A department which has a budget of $38 billion a year. John cited and you did also that 36,000 released in 2013. Of that we had 193 homicide convictions, 426 sexual assaults. 303 Kidnapping convictions. Those people were released. This is the kind of inept government that we have running this system. In this case it is a bad system.

Jonas Max Ferris: Let's accept parade the illegals from the fact the justice releases criminals every week in America. Between half and 75% go back to doing the stuff.

Ashley Pratte: If you live in this country and you break the law, you go to jail. Plain and simple. That's where it stands. I don't care what the infraction is. You do your time and that's it. Plain and simple. Story solved. Problem solved right there the real issue is the justice system in this country and the fact that we do have overcrowded prisons and that is something we've been hotly debating for years now is what happens when they get overcrowded? Who is getting released? What criminals are we letting back out into the streets. No exemptions. It doesn't matter if you've been in this country 10 years or a week. If you break the law, you serve within our justice system.

Gary B. Smith: Set your DVRs on record. This might be the only time i defend government intervention. I'm a big fan. I talked about the department homeland security. The government has to the protect us. It's like our landlord in this case. Someone has to step in and make sure the walls, communal walls are painted. We have to protect the sky. Some crazy drone operator is going to crash it down on our house. There are going to be lawsuits. The government does need to step in here.

Jonas Max Ferris: At the least, we would need the regulation of noise and insurance if it crashes into someone's house. I would consider a flat-out ban before this gets any worse. Do you see where this is going? Tesla is going to make a self-driving drone rich people are going to fly to work in their drone pods. It will be a black sky of rich people. Noisy, black skies around the clock. It will be too late because then we'll expect to have one.

John Layfield: Absolutely. We are in an alternative universe. Pigs are going to start flying, hells are going to freeze over and my Dallas cowboys are going to win the super bowl. Gary b. Called for more government regulation. That's nuts here. I agree with you. That is the answer. I don't agree with my friend Jonas. There are a lot of people town councils in the 1900s saying you should ban these horseless carriages because they are going to scare all the animals coming down main street. This is technology. It's coming. I agree. Find a way to make it safe. It's going to be here.

Chuck Rocha : I've been anti-drone for a little bit because I didn't want to put my ups driver out of work. We need all these jobs. I didn't want a robot taking over the job. Is there an instance when I could use a drone? I got back to Louisiana where I was red fishing in the swamp. If I needed bait, that would be the perfect way to deliver bait to fishermen.

Ashley Pratte: I think it's awesome. As a young person here, I'm thinking it's neat a pizza could get to my house in three minutes. It's awesome i could order shoes off amazon and they could arrive in a certain amount of time and not wait five to ten days. As much as i would like to save the jobs, this is cool innovation. We are moving towards these different things. I think we ned to find a way to regulate them. Again, technology is coming. I saw the other day there's these flying cars now. That worries me a little bit. Who is going to be operating those? I'm not entirely sure. I'm not that great. If I'm flying a car in the air, watch out. I don't know. I think it's awesome.