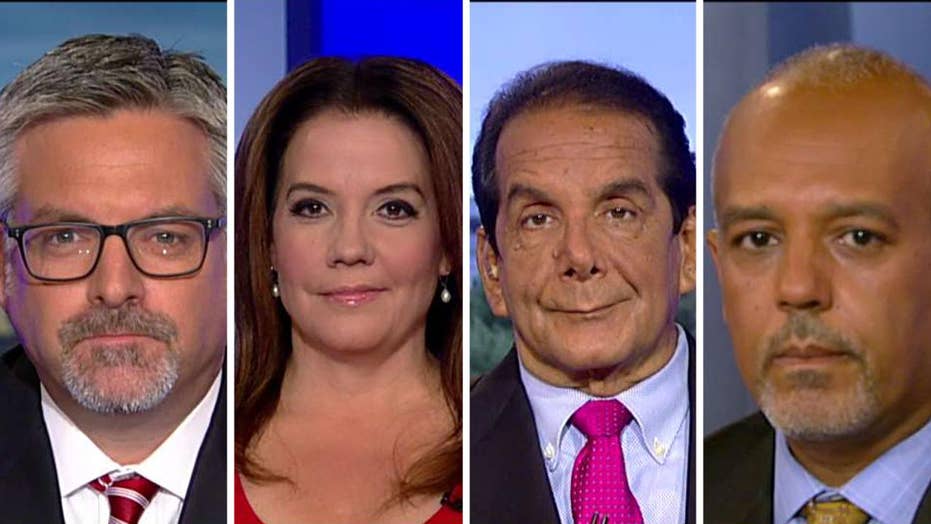 This is a rush transcript from "Special Report with Bret Baier," August 14, 2017. This copy may not be in its final form and may be updated.

PRESIDENT DONALD TRUMP: Racism is evil, and those who cause violence in its name are criminals and thugs, including the KKK, neo-Nazis, white supremacists, and other hate groups that are repugnant to everything we hold dear as Americans.

U.S. ATTORNEY GENERAL JEFF SESSIONS: Justice will be done. We are coming after these people.

BILL HEMMER, FOX NEWS: It is the story of the country is talking about. That's just a sample of what's happened. The last woman there, the mother of Heather Heyer, age 32, killed in Charlottesville on Saturday. Late today the chief in that town taking questions at times that went to the police response and reaction on Saturday afternoon. He said the following.

AL THOMAS, CHARLOTTESVILLE POLICE CHIEF: Absolutely I have regrets. We lost three lives this weekend, a local citizen and two fellow officers. We certainly have regrets. It was a tragic, tragic weekend.

HEMMER: There was a lot to go over on this story now. I want to bring in our panel: Steve Hayes, editor in chief of The Weekly Standard; Mollie Hemingway, senior editor at The Federalist; Mo Elleithee, executive director of the Georgetown Institute of Politics, and syndicated columnist Charles Krauthammer. Good evening to all of you. Steve, would you like to begin tonight? Where are we on this story?

STEVE HAYES, THE WEEKLY STANDARD: Look, the president's silence over the first two days of this controversy said a lot more than his words earlier today. Whenever you have white supremacists and neo- Nazis holding hate rallies that lead to violence and eventually committing acts of domestic terrorism, you denounce them harshly. You denounce them specifically, and then you do it again and again and again, and then you do it one more time for good measure. That's what presidential leadership would have looked like in this moment. And we didn't have it.

You had it for many members of the Senate, Republicans and Democrats. Tom Cotton called out white supremacists specifically, said that what they were preaching was anathema to the United States and its founding and its history.

The problem I think for President Trump beyond this missed opportunity and great moral failure, is that we know what it looks like when Donald Trump wants to call somebody out. We know what it looks like when he wants to condemn somebody. He's done it to journalists. He's done it to his political foes. He's done it to the media. He does it repeatedly. He did it again today to the CEO of Merck, Ken Frazier, when he resigned from the president's manufacturing council. The fact that he didn't do it for two days suggests that it wasn't an accident. So it's disappointing that the president would do this, but it's not surprising.

HEMMER: Mollie, he called it a moral failure.

MOLLIE HEMINGWAY, THE FEDERALIST: First of all, Steve said he was silent over the weekend. That's actually not true. He came out on Saturday.

HAYES: He was silent on specific groups.

HEMINGWAY: He said that hatred, bigotry, and violence have no place in America, that no citizen should ever fear for their safety, that hate and division must stop, that we must remember this truth that no matter our color, creed, religion, or political party, we are all Americans first, that we should love our country and love each other. And then today he comes out and he explicitly condemns racism. He calls on Americans to love one another. He mentions the victims by name. And still everyone the media took issue with it. If you are doing that, you are sort of just predisposed to have a problem with what Donald Trump --

HAYES: That's total nonsense. That's absolutely nonsense. The president didn't make a specific condemnation of these groups. He had done it before. This is what happened with the David Duke episode back in March of 2016 when he gave a grudging disavowal and then he was offered an opportunity to give a real disavowal. He refused three different times to do it. Then he lied about why he did. You can make it about the media if you want to but at some point it's got to be about the president.

HEMMER: Moments ago this tweet from the White House, "Made initial remarks at Charlottesville and realized once again that the fake news media will never be satisfied. Truly bad people." That from moments ago. And this is the vice president traveling yesterday on Sunday making a similar point about the attention afterwards.

VICE PRESIDENT MIKE PENCE: Many in the national media spend more time criticizing the president's words than they did criticizing those who perpetrated the violence to begin with. We should be putting the attention where it belongs, and that is on these extremist groups that need to be pushed out of the public debate entirely and discredited for the hate groups and dangerous fringe groups that they are.

HEMINGWAY: I'm not entirely sure we need to put so much attention on either extreme left groups or extreme right groups which don't represent a very significant part of the American political life. They do need to be marginalized, they need to be strongly condemned by people as individuals up to the president, but this is not representative of who we are as Americans and so we should keep it a little bit in check.

MO ELLEITHEE, GEORGETOWN INSTITUTE OF POLITICS: It's not just the media that found the president's weekend remarks ambiguous. Neo-Nazi groups did too. They took to the Internet to celebrate his remarks. On The Daily Stormer website, which is a neo-Nazi group, they celebrated his remarks, saying they were really, really good because there was no direct condemnation of us.

HEMINGWAY: He said racism is evil on those who cause violence and its name are criminals and thugs, including the KKK, neo-Nazis, white supremacists, and other hate groups.

HEMMER: Back to the vice president's words. Are we giving these words more attention than the actual incident?

HEMMER: That's the point that Mike Pence is --

ELLEITHEE: The president himself spent years attacking his predecessor for not calling out the enemy by name, for not going after, in his words, "radical Islam." If you cannot call the enemy by their name, how can you defeat it? That was a refrain we heard time and time again from Donald Trump before assuming office. It took him two days to call the enemy out.

HEMMER: That was the immediate reaction on Saturday afternoon that you reflect there, Mo. Charles, where are you on this? How do you view it now in light of the last 48 plus hours?

CHARLES KRAUTHAMMER, SYNDICATED COLUMNIST: This is not a media story. This is a presidential story. What is shocking is that the president of the United States did not have the instinctive, reflexive, automatic response you would expect of any American leader and what we saw across the spectrum in American leadership and among the populace in being utterly revolted by these rightwing, white supremacists, neo-Nazi groups. And if the president did not do what was absolutely natural, that's what makes it a story.

The fact that he said, oh, yes, and then he added, in his statement on Saturday he adlibbed "on many sides." And he repeated it, "on many sides." Where did that come from? Yes, of course, there is a denunciation to be had of the left, but this was begun by, instigated by, created by neo- Nazis, KKK, and white supremacists. They were the ones who created the beginning of this incident. And one of them is the one who killed a woman, injured a lot of others.

It seems to me you start by denouncing what is obvious. And the fact that the president did not, had to do it to days later, is simply stunning. I'm not begrudging him that he said it now, but I remember in the campaign he used to mock his other candidates, his competitors, for reading from a prompter. He had to read from a prompter the name of these groups rather than spontaneously answering on his own on Saturday when he was on his own.

HEMINGWAY: It's like we are living in an alternate reality here. People are taking -- they are not listening to what Donald Trump actually set on Saturday, and they are not reading the actual full comments he gave where he was explicitly denouncing bigotry and violence, where he called on people to come together.

And the fact is that there actually is a violence problem on both the left and the right. In recent years Americans have seen violent protests everywhere from Portland, Berkeley, Ferguson, Chicago, Milwaukee, St. Paul, Brooklyn, Baltimore. All throughout the country people have experienced these violent protests. There was an assassination attempt on Republicans by a totally mainstream progressive leftist activists, and there is a problem on all sides. And people need to come together and denounce all those things and not tar the entire Democratic Party as being part of the leftist violence, not tar the entire Republican Party as being part of the rightist violence.

HAYES: I agree with you that some people are living in an alternate reality. I just don't think it's us. The problem is, if you look at what the president said, he didn't single out those groups. What you read to Mo was what he said today. The fact that he didn't do it for two days speaks volumes. And the fact that he condemned generic racism and bigotry --

HEMINGWAY: Nothing Trump says will ever be enough for certain people.

HAYES: Certain people will defend everything Trump says no matter what.