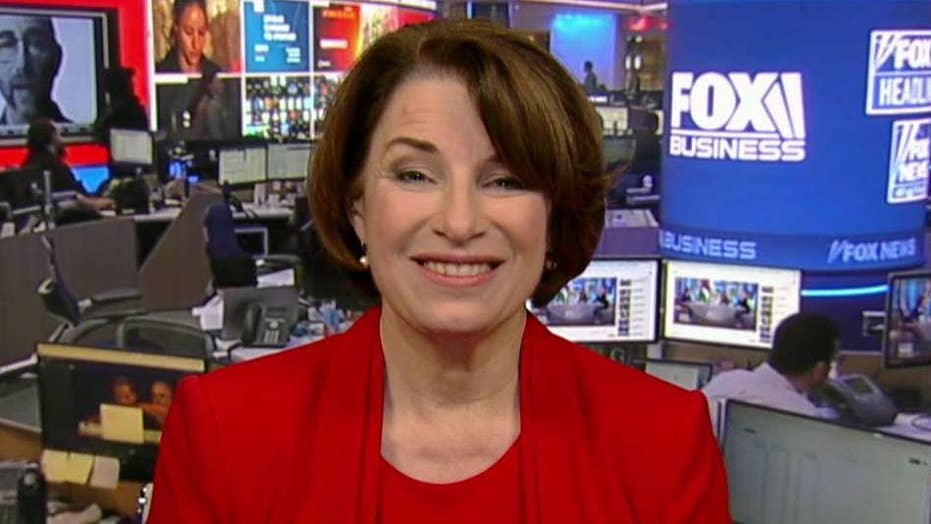 This is a rush transcript from "Special Report with Bret Baier," November 21, 2019. This copy may not be in its final form and may be updated.

BRET BAIER, ANCHOR: Earlier, I talked to one of the participants of last night's debate, Minnesota Democratic Senator Amy Klobuchar. I began by asking if her fellow Democrats have made the case for President Trump's impeachment.

SEN. AMY KLOBUCHAR, D-MINN.: I made clear from the beginning, Bret, that I think this is impeachable conduct. Now, I didn't call for these impeachment proceedings until I heard about similar conduct, where the president was literally making a plea for dirt on political opponents. I think this is a major problem. And these witnesses have been very credible. You have military career officers. You have diplomats who have served our country for years. You have Fiona Hill, who worked with Mr. Bolton, who's an expert on Russia. And I think that the issue here is whether or not the president has put private and partisan interests in front of our country. I think that he has. That's a case that will come over to the Senate. We will look at all the counts. We will have a trial --

KLOBUCHAR: Chief Justice Roberts will preside over the trial, and then we will make a decision.

BAIER: There are six of you, actually, in this race who will be a part of that jury, potentially bouncing right up against the Iowa caucuses February 3rd -- depending on the timing of all of this. Here is Republican Will Hurd from Texas -- a moderate, not up for re-election -- at the end of this. Here's what he said.

Will Hurd: An impeachable offense should be compelling, overwhelmingly clear, and unambiguous, and it's not something to be rushed or taken lightly. I've not heard evidence proving the president committed bribery or extortion.

BAIER: Now, if they -- if he says he hasn't seen it -- he's a former CIA officer -- but he's not up for re-election. He's not politically motivated here, one would think. If you don't have Will Hurd, are you going to lobby Republican senator to kick this president out of office.

KLOBUCHAR: This is going to be a very serious matter, and of course the House has to vote first. But think there are a lot of senators on both sides of the aisle in the Senate that take their responsibility very seriously when it comes to our job. And our job -- we have a constitutional duty to hear the evidence. So, I wouldn't use the word "lobbying." I would use the word hear the evidence and make a decision about what the president did here.

BAIER: The latest poll in Wisconsin -- and you all are holding your convention in Wisconsin -- has this upside down about impeachment: 40 say impeach and remove from office, 53 percent say don't think so. Do you think that this process, at all, hurts you in your race for president?

KLOBUCHAR: I don't, because I think that the House held their hearings in a public, transparent way. That was the first complaint, of course, from some of the Republican congressmen, when they stormed into that secure area. And they held transparent, open hearings. People will make their own decision. And I think there's a lot of concern, as you look at the governor's race in Kentucky -- you look at what happened in Virginia, where both the state house and the state senate flipped to Democrat -- that was while this impeachment proceeding was going on. I think people are able to make their own decisions -- whether they agree or not with impeachment -- to say, "You know what? We don't like how the president is handling a lot of things right now. Not everyone is sharing in this economy." And the farmers are saying, "We don't like the effect of this trade war" or the oil wavers [spelled phonetically] on our biofuels business. There's a lot of things going on right now, and mostly, as I said at the debate last night, this is a values check -- a patriotism check for many independents and moderate Republicans. It is not just about a fired-up Democratic base. It is about independents and Republicans that are just starting to say to themselves, "You know what? I don't want my kids to watch this president on TV right now."

BAIER: All right. Let me ask you quickly --

BAIER: -- about the debate last night. And there were -- arguably a number of media organizations said you had a good debate. Senator Warren tried to lay out a different plan for Medicare for All, in which she said, basically, it's going to be phased in over three years. And then, people who want Medicare for All will vote on it. Did you see an evolution in Elizabeth Warren's plan, and how do you deal with healthcare within your own primary?

KLOBUCHAR: Well, I have always argued for a non-profit public option. And I think that's the best way to do this. And then, you don't kick 149 million people off their current insurance. Every one of my congressional colleagues that was on the stage, they had signed up on that bill. I didn't. And in fact, her plan still calls for that. She's just doing it a few years later, where she passes it. So, you know, I have made this argument in several debates right now. It's nothing new. But what I hope we move to discuss as a nation is how we bring down pharmaceutical prices.

BAIER: Last thing. If you are talking to an independent or Republican who is dissatisfied with President Trump, doesn't like him for one reason or another; is ready to vote for a Democrat, but is pro-life, can that person fit in your party?

KLOBUCHAR: Yes. I am pro-choice myself, and I think it is very important for our party to have the leader of our party running for president be pro-choice. But I do believe that we have pro-life people in our party as voters, as elected officials, and there's room in our party for difference of beliefs. I believe that. And I am someone that is strongly pro-choice, but I'm also strongly pro-adoption. I'm someone that leads the adoption caucus, along with Senator Blunt, in the Senate. And I think the case can be made that we want to make sure women have the right to choose -- and I strongly believe that. I said that on the stage last night, that we should codify Roe v. Wade, and I mean it. And we also have -- for people who want adopt kids -- there's a lot of kids out there that need adopting. There's international adoptions that have been slowed down lately --

KLOBUCHAR: -- that need to be changed. And I've worked on both issues.

KLOBUCHAR: -- and I think you can do that.

BAIER: -- Senator, we appreciate your time. We'll follow you as a presidential candidate, and likely as a juror. We'll see you soon.

KLOBUCHAR: [laughs] Okay. I will see you soon, Bret. Thank you.