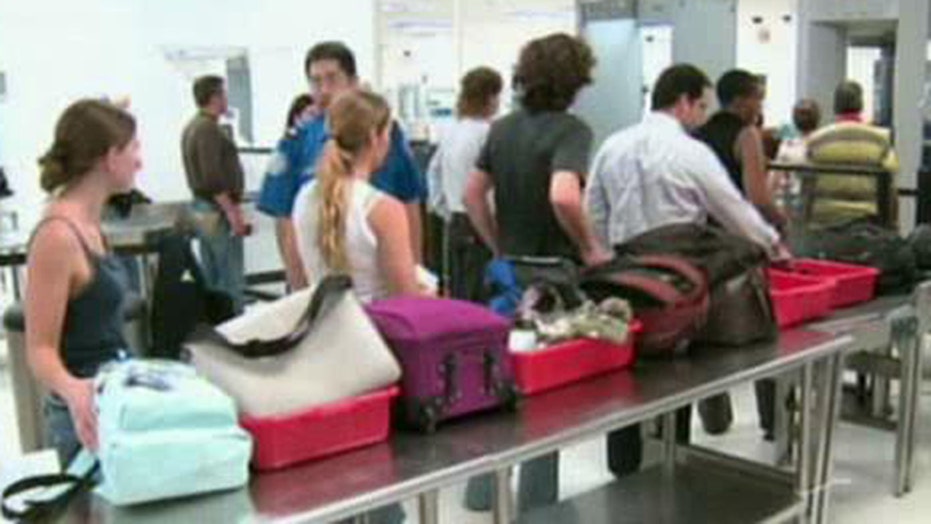 Airlines getting creative on how to nickel and dime passengers?

JONAS MAX FERRIS: No question about it because this year is the year we're getting out of stimulus. This is the year we're tightening the budget and raising taxes. Everybody knows we were going to cut spending with the program and businesses know it. We saw the unemployment report. They're hiring people so they're not scared that this is going to cause the next recession. That was the fear lingering in the market. When the government backs out it's going to come to an end, a recession. It hasn't happened, and it's not happening and so the government can back out, slowly, but surely and let things go the way they go.

STEPHANE FITCH: Yeah, but, I mean, given the sequester cuts, the credit for the bull market, I mean, that's a little like having a mom goes through pregnancy and birth for nine months and then we give dad the credit for cutting the umbilical cord at the last minute. It doesn't seem fair. The fact of the matter is, the thing that setup the bull market with some painful, controversial decisions four years ago - stimulated the economy, the banks and the auto companies. There's a lot of hard work and patience by the American people who had to wait too long for this.

GARY B. SMITH: A lot of times we talk about things on the show that maybe a little bit inside baseball. Maybe Wall Street centric or Capitol Hill, but in this case sequester--there's not a person out there that doesn't know about sequester, that's number one, people know about it. Number two, do people think it's a big deal? Absolutely. People aren't thinking the sequester is small even though it's relatively nothing - people think it's huge and three, do people support it? In the latest poll I saw, two-thirds of the people across the party support the sequester. So if you think, my gosh, D.C. is doing something that we support and is a big deal, yeah, that's cause for cheer and I think it's reflected in the stock market.

TOBIN SMITH: You know its part of it. Let's look at the bigger picture here, the same time we have the sequester happen we had the representatives pass a six month extended spending bill and essentially wipe out many or small parts of that spending. At the same time, everybody is excited about spending cuts and six months of outrageous spending. We obviously have another issue here, economically this was an overhang and at some point, I don't believe that people thought it was going to happen, and that we were going to go into this lockup. And by not going into the lockup, that did get the marginal buyer off their can to buy some stocks. The stocks melted up, it wasn't moved up, and it melted up. People waiting jumped in with both feet and legs.

JIM LACAMP: Stocks don't care about Washington. This market's been moving higher for the last three months, the last four years. Stocks don't care about the dumb arguments that Washington keeps having, if anything, they like them a little bit. I mean, at least you're talking about spending cuts and that's a positive. The fact that everything in the world didn't fall apart when they cut--when they put the sequestration in is kind of like Wall Street giving a big finger to Washington, saying, we don't care what you do, we know these aren't real cuts, we know these arguments aren't going to do anything meaningful. We're going to move on without you. The doomsayers, who say this is going to shut down the economy, they've been emasculated and now that we've seen some cuts come in, at least the notion of cuts come in - the world hasn't fallen apart.

NATION'S JOBLESS RATE DROPS TO 7.7 percent IN FEBRUARY, DOWN FROM 7.9 percent IN JANUARY

JIM LACAMP: You've got to look at the body of evidence here, Brenda. I mean, if you look at today's numbers, they were good, but if you look at the numbers going back to September, October, since then the numbers have been tepid. Finally, look at the labor force participation rate at 58 percent, worst number since 1981, it's terrible. A lot of part-time jobs, a lot of people working two, three jobs and we traded construction jobs, we've traded manufacturing jobs for burger flippers and robots so wages are down as well. So, yeah, we're doing a little bit better, but not given the total amount of stimulus that we put into the economy.

JONAS MAX FERRIS: Definitely, it's getting better, especially given that the stimulus has run out. That part about the participation rate stinking, that's true. A lot of people were disenfranchised and as they come back into the labor market because they see it's improving that'll put upward pressure on the unemployment rate. However, people are buying stuff and they're going to be optimistic about developing new products and weigh in on that. And is it going to go back to levels it was in the '90s anytime soon? No. And look, when you see a company layoff over a thousand people like Google with Motorola, you don't read about the thousands of people that also are hiring in other divisions. The layoffs get the attention and it doesn't mean the economy is falling apart necessarily.

GARY B. SMITH: Kind of the inverse of that as Jim pointed out with the labor force participation rate. It is not improving. In fact, I looked up the data and it has gone down every year since Obama was elected. So, it is going the opposite way. For those that think the economy depends on a few things - how much money you have in your pocket, how much your house is worth, and if you have a job, that's one indicator that it's going the wrong way, and it's flat, but it's not. It's going down. The labor force participation rate used to be in the high 60's in our heyday. Now, as Jim pointed out, it's barely around 60 percent.

STEPHANE FITCH: I think it is, but I also think these guys are right, that there's a little bit to worry about in this. I look in particular at the long-term unemployed; these are people unemployed more than two years. There's about five million now. Five million Americans who want jobs and haven't worked in two years, and long-term unemployment has been proven, it destroys families, and it ruins lives. I am worried about how we get those folks back in. I don't think we've done enough for them and so it's definitely a little too soon to celebrate. But I do think it was a good report. I do.

TOBIN SMITH: There are sectors of the economy that are absolutely growing. Look at automobile manufacture, oil and gas and energy and professional services that are growing and that's primarily college-educated people over 30 years old. We are dragging terribly and have 25 to 30 percent unemployment with high school drop-outs, new college graduates and low, unskilled workers. That part of the economy was thriving, when the whole thing was running on a bubble. That's not going to come back nearly as fast and frankly, you know, building an economy on unskilled, non high school graduates is not going to be there. It's getting those people to get more education.

REPORT: AIRLINES COMING UP WITH NEW FEES TO CHARGE PASSENGERS

JIM LACAMP: Well, it is gouging in the sense that nobody knows what they're paying for tickets anymore, and there are so many variables that you have to put into the computer and there are a lot of bad guys here. The airlines are definitely playing a game of smoke and mirrors and that's going to cost us. If you look at the Federal Reserve board and their money printing it has forced up fuel prices. Picking a bad guy is like picking between Kim Jong Il 1 or Kim Jong Il 2. I do think there's gouging but customers are going to have to find a way to figure out these things to take care of it themselves.

TOBIN SMITH: Just do this. Go on United Airlines, and get a flight from New York to L.A. There are flights as low as $240. When you get your rental car and hotel you're already at $300. The reason that these things are at a great value is because they now have a business model that works and with the model if you want to get on early, pay extra. If you want to bring two gigantic bags, pay extra. It's a great bargain and if you play smart and bring one carry on, great deal.

JONAS MAX FERRIS: No such thing as gouging if you're an economist. And second of all, the core issue here, which is if the consumer bought hotel rooms by what's the cheapest per square foot price I could get - then a hotel is going to start charging you for ice at some point. The consumers, most of them want to get from point a to point b and don't have loyalty to the brand or points. If it's $50 less they'll go to that airline.

STEPHANE FITCH: We're an a la carte society and we like choice and we choose things like the cheap rental car and upgrade to the bigger model or the value meal and then super size it. We move to Arizona which has no taxes and we overpay for private school. This is how things work these days in America.