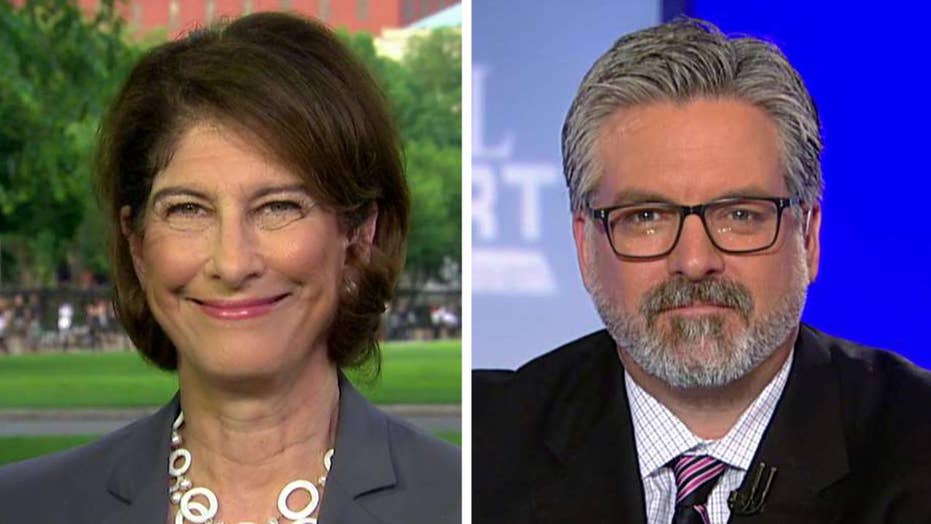 This is a rush transcript from "Special Report with Bret Baier," May 29, 2018. This copy may not be in its final form and may be updated.

JEFF SESSIONS, U.S. ATTORNEY GENERAL: If you are smuggling a child then we will prosecute you, and that child may be separated from you as required by law. We don't want to separate families, but we don't want families to come to the border illegally.

THOMAS HOMAN, ICE ACTING DIRECTOR: Every law enforcement agency in this country separates parents from children when they are arrested for a crime. There is no new policy. This has always been the policy.

UNIDENTIFIED MALE: There is real bipartisan support for changing that.

SEN. MARCO RUBIO, R-FLA.: I would be open to changing that law, but the better law to change is to secure our border.

BRET BAIER, ANCHOR: Immigration, specifically about immigrant children, 1,500 of them, the headline said, had been lost under the Trump administration's adherence to this policy. HHS putting out a statement refuting that, saying "The assertion that unaccompanied alien children (UACs) are lost is completely false. These children are not lost. Their sponsors, who are usually parents or family members, in all cases have been vetted for criminality and the ability to provide for them simply did not respond or could not be reached when this voluntary call was made. While there are many possible reasons for this, in many cases sponsors cannot be reached because they themselves are illegal aliens and do not want to be reached by federal authorities."

So what about this issue specifically on where immigration stands currently? Let's bring in our panel: joining me here from the White House, Mara Liasson, national political correspondent for National Public Radio, and at the bureau, Steve Hayes, editor in chief for The Weekly Standard, and Matt Schlapp, contributor with The Hill. Mara, this got lots of attention.

MARA LIASSON, NATIONAL PUBLIC RADIO: It got a lot of attention and it has a lot of parts to it. First of all, the idea these kids were lost is not true. On the other hand, the idea of separating kids and families, which was a policy by previous administrations and, as you just heard, the Trump administration made very clear it wanted to continue it because it was a deterrent. Don't bring your kids here illegally because you are going to get separated from them. All of a sudden it seems like the White House felt that they didn't want to be associated with this, so they decided to blame it on Democrats even though it was a policy that they were carrying through.

BAIER: Steve, the characterization of it really did depend on what you are watching or reading as far as these 1,500 kids, or that the policy actually went back a couple of administrations.

STEVE HAYES, THE WEEKLY STANDARD: That's true, but this really took off over the weekend when you had a former Obama speechwriter Jon Favreau and others putting this out there, putting out pictures of children in cages and hyping this and saying it was outrageous because it was the Trump administration doing this, failing to note, of course, that this had happened, as you say, under previous administrations. So that is something I think that poured fuel on this proverbial fire, if you will.

But there's no question that the Trump administration is trying to take a tough stand on illegal border crossings, which are up after initially going down at the beginning of the Trump administration by saying this, by making this part of their policy. We saw I think at the beginning of the administration what the power of presidential rhetoric, what the power of administration rhetoric did to decrease the numbers of people trying to come across the border. And I think that that is their goal here. And we could debate whether this is the right policy or not but they have said, both John Kelly as chief of staff and, who just played, Jeff Sessions as attorney general have made clear that they view this as an effective deterrent.

BAIER: Matt, I always say the disclaimer, or I try to, your wife works for this administration. And what do you think the thought process is behind of this move? Are they pushing back against bad news stories on this or is that a strategy here that's developing on the immigration?

MATT SCHLAPP, THE HILL: Bret, be careful. It's very hard to get into the mind of your spouse. But I would just simply say that we've got to focus on the law. And the only thing that the Trump administration is doing differently than the Obama administration when it comes to people with unaccompanied minors is they are following the law. It is a criminal violation for an adult to cross our border illegally.

The question is, what do you do with the kids? Here is the kicker. The kids, the 7,600 kids or some that we're talking about, this population, almost all of them will stay in America for as long as they want. Let's have that set in. We only sent home something like five kids last year. If an unaccompanied minor gets to our border and is taken into this process, they stay in America. And most of them who are given a place to stay temporarily while supposedly they are going to have a hearing in the first 30 days are given to relatives who are themselves here illegally.

So when Democrats say that the Trump administration lost 1,500 kids, Mara's right, that's not accurate. We've actually lost 20 million people, and those 20 million people are bringing in more relatives to the border. This is why no matter you build a wall or not, we have a problem every day at the border, that there are all these loopholes that allow you to jump in line, hopscotch in line to be able to be in America for as long as you want to be.

BAIER: Mara, the key point here is the reason the lost story is not accurate is because they were calling these sponsors, and frankly they just didn't answer. They don't know if the kids aren't there, if they're someplace else.

LIASSON: That's right. That doesn't count as lost, meaning they don't know where they are. They didn't return a phone call.

To me the interesting thing is the Trump administration wanted to publicize this. You had John Kelly, Jeff Sessions saying we are going to separate these kids as a law says we should, so don't bring them. All of a sudden it sounds like they feel that they want to blame that separation on Democrats.

BAIER: But do you think that this as a political issue is one that is powerful for the Democrats as they head to the midterms?

LIASSON: Sure. They want to say the Trump administration is heartless and they're separating kids even though Obama did the same thing. But what is so interesting to me is Donald Trump does have a soft spot in the immigration debate. DACA kids, he has often said that he loves them, he wants to treat them with a great heart. He clearly doesn't want to be on the wrong side of this story and seem like he's the guy separating kids.

BAIER: And Steve, last word, the thought about immigration as a legislative issue as we head towards the midterms now?

HAYES: That's easy, Bret. I can easily predict what's going to happen. Nobody knows. Nobody knows. In the short term this is a Republicans challenge because Republicans have control of the House and there is not consensus on how they should proceed in the House. You have more restrictionist efforts like the Goodlatte legislation that conservatives have been pushing for a long time. You also have moves by the moderates in recent days to try to get their legislation surfaced, and there's disagreement among Republicans. Longer term the question is whether I think Democrats will agree to fund something like a border wall that Donald Trump is saying that he wants.