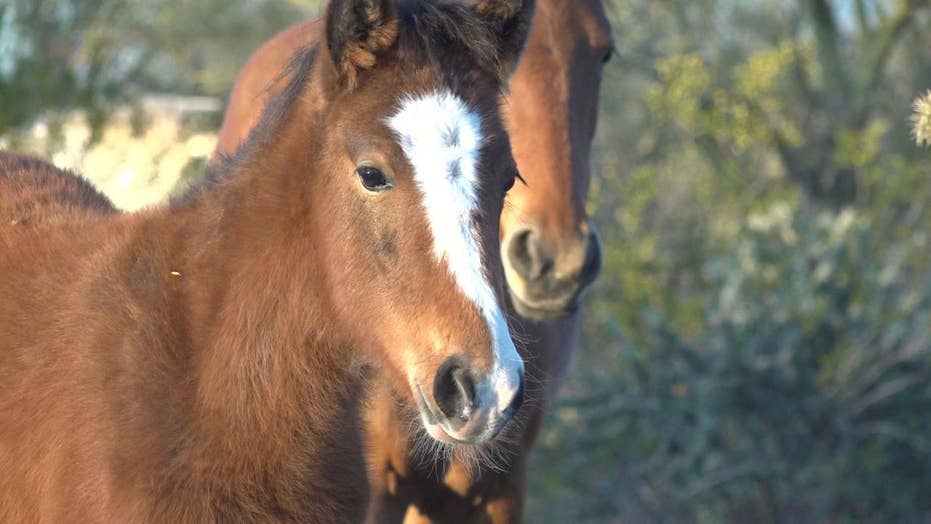 FOUNTAIN HILLS, AZ – For centuries, wild horses have been a western icon, freely roaming open pastures in states like Montana, Wyoming and Arizona.

But because of a recent drought, their usually green scenic pastures turned into dry, brown barren lands, leaving thousands of wild horses with scarce food and water.

An effort to save them, however, was not without some controversy.

A non-profit group, Arizona’s Salt River Wild Horse Management Group, started an emergency feed program where they set up daily feeding stations so the horses could eat and drink.

For centuries, wild horses have been a western icon, freely roaming open pastures in states like Montana, Wyoming and Arizona. (Fox News)

“It’s just a humane management factor, we don’t want the horses out here starving,” said Cindy Smith, a horse volunteer. “So, the lack of rain did not produce the forage on the ground, the natural habitat for the horses to feed and so it was imperative that we step in from a human perspective and bring them back to good health. They would’ve starved.”

Members of the horse management group said when they stepped in, some of the horses were dying.

“We had mares (female horses) that were in very bad condition, that were actually close to death and we have two of them here at our facility that we needed to rescue because they were so emaciated,” said Simone Netherlands, Salt River Wild Horse Management Group president.

But these feedings aren’t supported by everyone. The federal government’s Bureau of Land Management has a Wild Horse and Burro Program, which manages wild horses and burros on 26.9 million acres of public lands across 10 western states.

Gus Warr, a wild horse and bureau specialist for the Bureau of Land Management, said though the agency commends the work of nonprofits and wants to work with them, he’s concerned about people feeding the animals because it makes the wild horses too dependent on humans.

“As an agency, we do not supplemental feed wild horses or burros,” he said.

The group that helped the wild horses said many were close to death and needed to be rescued because they were so emaciated. (Fox News)

Michael Schoon, a professor at the Arizona State University School of Sustainability, said there are other ways to keep the animals alive.

“People are concerned with supplemental feedings and things like this because they're wild and we want to keep them wild,” said Schoon. “They are a symbol of the American West and the pioneer spirit and all of this and we want to recognize these horses for the symbol that they are, as well.”

He said giving them water is one thing, but giving them food could also put the animals at risk.

But members of the wild horse management group thought there was no other alternative.

In Arizona this year, many areas of the state experienced a prolonged period with little to no rain. During multiple weeks, 100 percent of Arizona was in some form of drought. That left much of the land where the horses roam barren.

In Arizona this year, many areas of the state experienced a prolonged period with little to no rain. During multiple weeks, 100 percent of Arizona was in some form of drought. That left much of the land where the horses roam barren. (Fox News)

The non-profit used an app to record and track hundreds of the wild horses at Tonto National Forest.

“We partnered with the Department of (Agriculture) with Arizona and started a feed program where we were out almost every night initially and just monitored the horses’ health and we’re continuing to manage the horses and monitor their health,” Smith said.

The group was able to scale down the amount of feedings in the winter and this month stopped the feedings due to more rainfall and more forage on the ground. The group spent $76,000 on the feed program—the most it had ever spent.

The wild horse population has grown rapidly the past few years, so the group has also worked to keep the numbers under control through what they call a humane birth control program.

“Through…the program, we can make sure that the herd is humanely managed and that the population numbers go down a little bit, which is what the authorities want,” Netherlands said. “Back in 2015, they were in danger of roundup and removal and we're very proud that today these horses are protected and that we can manage them humanely.”

There are many efforts to keep the American West’s symbol alive and under control, but many say the important thing is to keep them wild.

“I think that myself, like most people, love these horses,” Schoon said, “and want to see them healthy and prosper.”