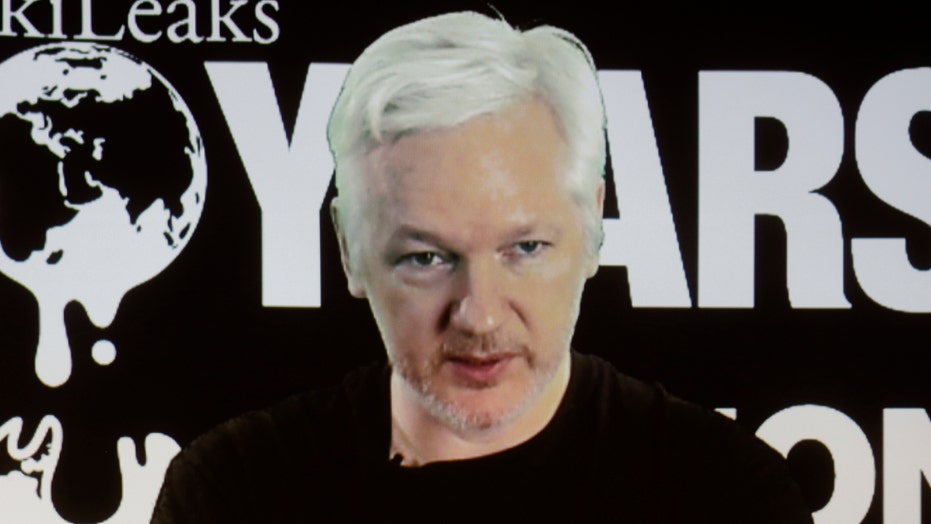 WikiLeaks said Monday that its founder Julian Assange’s Internet link was severed by a “state party” and that “appropriate contingency plans” had been activated.

The website’s announcement came hours after it published three cryptic tweets. The messages referenced Ecuador, Secretary of State John Kerry and the United Kingdom’s Foreign Commonwealth Office. Each tweet was matched with a string of numbers.

Gizmodo noted that the 64-character codes sparked a whirlwind of rumors that the 45-year-old Assange had died. Rumors on Reddit and Twitter said the numbers triggered a so-called “dead man’s switch,” which could be enacted in case Assange did die. Gizmodo reported that such switches do exist.

WikiLeaks hasn’t tweeted anything else about Assange’s Internet access or how it may have been “severed.”

Various U.S. officials and pundits have made threatening statements directed at Assange in the past. WikiLeaks tweeted in early October an alleged 2010 quote from then-Secretary of State Hillary Clinton asking if Assange could be killed in a drone strike, and, that same year, former Democrat strategist Bob Beckel said on Fox News Channel that "a dead man can't leak stuff." This month, "specific information" prompted Assange to scrap a dramatic London balcony address to celebrate WikiLeaks' 10th anniversary.

Assange also has hinted that deceased DNC staffer Seth Rich may have been a secret source for WikiLeaks. Rich, 27, was discovered with multiple gunshot wounds to the back at a Washington, D.C., intersection in July. He died soon thereafter. Authorities believe Rich was the target of a botched robbery; however, odd circumstances surrounding his death have invited conspiracy theories.

The controversial anti-secrecy website has been busy in October, methodically releasing a trove of emails allegedly stolen from the gmail account of Clinton presidential campaign chair John Podesta. WikiLeaks had released just more than 12,000 emails of a purported 50,000 they have access to as of Monday morning. The Podesta emails have raised questions about a too-cozy working relationship between the Clinton campaign and some members of the media and has also shed light on how Clinton's team handled various scandals.

It wasn't immediately clear if the Podesta revelations were the "October surprise" Assange hinted his group would release in advance of the U.S. election.

Many experts believe WikiLeaks is not an independent organization, but in fact a front for the Russian government. Podesta suggested recently on "Fox News Sunday" that his emails had been hacked by the Russians, and officials also have determined a recent hacking of the Democrat Party's computer files was likely the work of Russian actors.

Vice President Joe Biden told NBC News on Friday that the U.S. would be "sending a message" to Russian President Vladimir Putin "at the time of our choosing, and under the circumstances that will have the greatest impact."

Assange has lived in the Ecuadorean Embassy in London for five years as officials in Sweden have sought him on criminal charges.

One of the last reported interactions with Assange came Saturday when former "Baywatch" star Pamela Anderson brought the WikiLeaks boss a vegan meal.