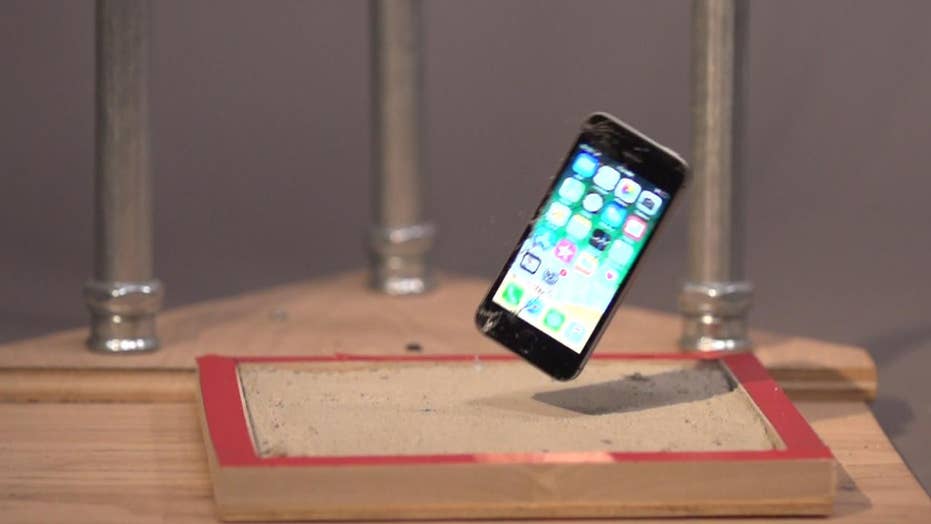 The toughest (and weakest) cell phones on the market

Tom's Guide tested all of the major smartphones on the market by dropping them over the course of four rounds from 4 feet and 6 feet onto wood and concrete - and even into a toilet - to see which handset is the toughest. Editor & Chief Mark Spoonauer is here to share some of the results.

We all know that feeling. You're walking along the street, answering a text message, when someone bumps you, and your phone goes flying onto the concrete. Will your phone hold up, or will it crack under the pressure?

To help you avoid finding out the horrifying truth when your phone goes clattering to the ground, we tested all of the major smartphones by dropping them over the course of four rounds from 4 feet and 6 feet onto wood and concrete — and even into a toilet — to see which handset is the toughest.

Good news: Chances are, your phone will survive a 6-foot fall onto wood and, if it's lucky enough to land on its edge, withstand drops onto concrete with minimal damage. Bad news: If you don't have a screen protector, there's a really good chance something's going to break.

So, what's the toughest (nonrugged) phone out there? The $500 Motorola Moto Z2 Force. While the result wasn't completely unexpected — after all, the phone has a ShatterShield display, which the company guarantees against cracks — the Moto Z2 Force survived drops from 6 feet onto concrete, with barely a scratch.

Apple's least-expensive phone didn't prove very tough at all. In fact, the $399 iPhone SE was rendered unusable before all of the others. However, this was not a big surprise, as the newer iPhone 8 and iPhone X are made with much stronger glass than the iPhone SE's from 2016.

We also purchased a second batch of these phones, and dropped them from 100 feet using a DJI Mavic Pro drone onto a plywood target set up on an asphalt parking lot. Surprisingly, some of the phones survived intact. To see which phones made it, which ones didn’t, and why this might have happened, check out this story on our sister site, LiveScience.

To measure each phone's toughness, we dropped it from both 4 and 6 feet onto wood and concrete. After each test, we recorded the damage to the phone. If a phone was rendered unusable — the screen totally shattered, for instance — then we stopped dropping it. We have much more detail on how we tested here.

For the first round, we dropped each phone, face-first, onto wood from 4 and 6 feet.

The second round involved dropping the phone from a height of 4 feet onto a concrete pad. For this test, we dropped the phone first on its edge, and then on its face.

For the third round, we also dropped the phone onto concrete, but this time, it was from a height of 6 feet. Here, too, we dropped it first on its edge, and finally onto its face.

The final round for the surviving phones was to drop them from 4 feet into a water-filled toilet. Unused, of course.

Each drop was worth a maximum of 5 points; if a phone made it through all of the rounds unscathed, it would earn 35 points. The more severe the damage per drop was, the more points were deducted. If a phone was rendered unusable after a given drop, it would earn no points, and would not undergo any subsequent test. In total, there were seven tests:

Motorola guarantees that the screen on the Moto Z2 Force won't crack, and we believe it. This phone's ShatterShield display didn't break, even after drops onto its face from 6 feet. The only physical signs of damage were tiny nicks on the bottom edge of its aluminum frame.

While it can resist some liquids, it's too bad that Moto didn't make the Z2 waterproof; the phone seemed like it had died a few seconds after taking a dunk in the toilet. After it dried out, though, it came back to life, with no apparent damage.

LG's value-priced rugged phone — just $349 — made it through all of the 4-foot drops (wood and concrete) without sustaining any damage. That's because the X Venture is designed to be shockproof, thanks to its metal frame and reinforced corners.

However, a 6-foot edge drop caused the screen to shatter in the area beneath its physical buttons, and a hairline fracture through the middle of the screen appeared. A dunk in the toilet killed its microphone, but everything else, including the speakers, still worked.

As with every other phone we tested, Apple's $999 iPhone X survived both 4- and 6-foot drops on its face onto a wood surface. It also survived a 4-foot edge drop onto concrete; there were only minor scratches on the bottom of its case.

Still, the display remained largely intact, with almost no sharp edges, save for the upper-left corner, where some of the screen broke away. Following the toilet test, the phone turned on and off repeatedly for a few minutes, but resumed normal operation after that.

LG's flagship V30 ($699) made it all the way through our testing, but it didn't do as well as other phones. It survived drops onto wood from 4 and 6 feet without damage. A face drop from 4 feet onto concrete caused the screen to crack.

Subsequent drops on its edge and face onto concrete from 6 feet caused more damage to the periphery of the display, including in front of the camera, but the phone was still somewhat usable. The V30 is waterproof, so it survived a dunk in the toilet, though the audio was muffled afterward.

Drops from 4 and 6 feet onto wood caused no damage whatsoever to the Galaxy S9 ($720). A 4-foot face drop onto concrete caused the S9's screen to crack, but the phone was still largely usable. Following that, a 6-foot drop onto its edge caused a bit more damage, as did a face drop from that height.

Finally, a 4-foot drop into a water-filled toilet didn't cause much more damage. Ultimately, while the display was still viewable, the screen was cracked enough so that we would be hesitant to swipe it much, for fear of pricking our fingers.

This budget phone — which costs as little as $149 — proved pretty resilient, surviving 4- and 6-foot drops onto wood, as well as a 4-foot face drop onto concrete, with minimal damage.

However, a 6-foot face drop onto concrete finally did it in — the screen shattered in a number of places. It was still viewable, but there were enough glass fragments that we wouldn't want to swipe it.

Like other phones we tested, the iPhone 8 ($699 unlocked) survived drops from 4 and 6 feet onto wood without incurring any damage.

Samsung's phablet (which starts at $799) took 4- and 6-foot drops on its face onto a wood surface with ease. A 4-foot fall on its edge onto concrete caused some minor scratches on the bottom edge, but a 4-foot drop on its face cracked the screen in a number of places, including in front of its front-facing camera, which gave selfies a very artistic look.

A 6-foot face drop onto concrete caused the Note 8's screen to start flashing white, black and green, and the touch screen was completely unresponsive. The stylus was intact, though.

No damage occured when the OnePlus 5T ($499) landed face-first onto wood from heights of 4 and 6 feet.

Huawei's phone (which starts around $775 unlocked) might not survive pressure from the U.S. government, but it will survive drops from 4 and 6 feet onto wood without issue. It also withstood a 4-foot edge drop onto concrete, incurring only minor scratches to the bottom.

However, a 4-foot face drop caused the upper-right corner of the touch screen to stop working, and a 6-foot edge drop resulted in messed-up screen colors on the right side. A 6-foot face drop onto concrete shattered the Mate 10's screen so thoroughly that several pieces of it flew off completely, revealing the electronics underneath.

The Pixel 2 XL ($849 through Verizon) survived drops from 4 and 6 feet onto wood with no issues. However, when this phone landed with an XL-size thud on its face from 4 feet onto concrete, the screen cracked in such a way as to obscure the front-facing camera.

As with the Galaxy S9, an edge drop from 6 feet didn't do much more damage, but a face drop from that height caused half the screen to go white.

Apple's budget phone, which starts at $349, survived 4- and 6-foot drops onto wood without incurring any damage whatsoever, and a 4-foot edge drop onto concrete produced just a few scratches on the bottom of its case.

However, when we dropped the iPhone SE on its face from 4 feet, the screen completely cracked. Following that, a 6-foot edge drop caused a chunk of the screen in the lower-left corner to come off. Although all the icons were still visible, we decided to stop testing the iPhone SE at this point because we deemed its display too dangerous to use.