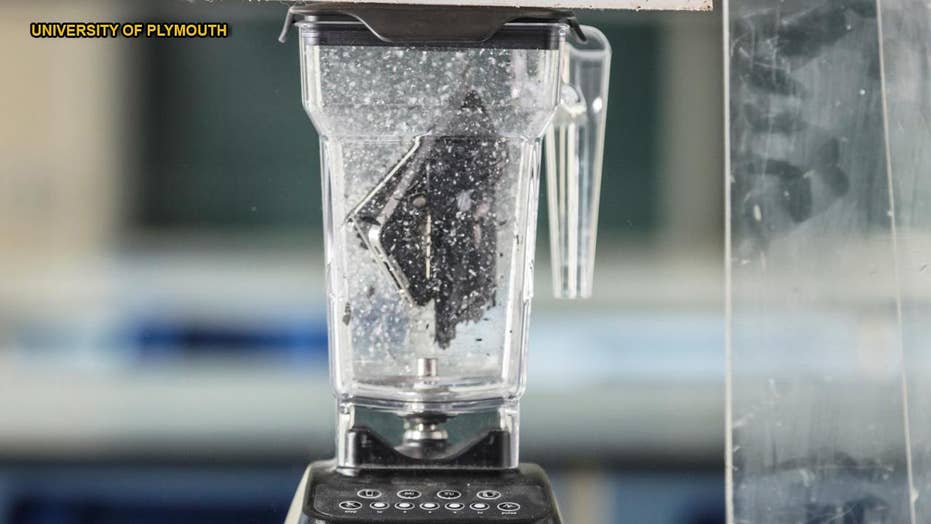 AMAZING VIDEO: iPhone is shredded to dust in a blender

Scientists at the University of Plymouth in the U.K. used a blender to reveal what our smartphones are made of. In remarkable video released by the university, an Apple iPhone is shredded to dust. The scientists then performed a detailed analysis of the resulting solution in acid to determine its precise chemical contents. The experiment was designed to highlight the rare mineral resources used in our everyday electronic devices.

Scientists at the University of Plymouth in the U.K. have released a remarkable video that shows an Apple iPhone being shredded to dust in a blender.

APPLE HARVESTED ALMOST $40 MILLION WORTH OF GOLD FROM RECYCLED GADGETS

“To conduct the experiment, the researchers took the blended phone and mixed it at almost 500°C with a powerful oxidizer, sodium peroxide. They were then able to do a detailed analysis of the resulting solution in acid to determine its precise chemical contents,” the university explained in a statement. “The results showed the phone used in the tests contained 33g of iron, 13g of silicon and 7g of chromium, as well as smaller quantities of other abundant substances.”

The shredded iPhone was analyzed by scientists.(University of Plymouth)

The geologists discovered that the phone also contained other important elements, including 900mg of tungsten, 90mg of silver, 70mg of cobalt and 36mg of gold.

The researchers say that 10 to 15kg of ore would need to be mined to create just one phone. This includes including 7kg of high-grade gold ore, 1kg of typical copper ore, 750g of typical tungsten ore and 200g of typical nickel ore, according to the study.

“Mining can be part of the solution to the world’s problems,” said Dr. Wilkins, in the statement. “But we are now in a climate where people are becoming more socially responsible and interested in the contents of what they are purchasing. Partly on the back of this, several of the major mobile phone companies have committed to upping their recycling rates. It is a positive sign that the throwaway society we have lived in for decades is changing, and we hope this project will encourage more people to ask questions about their own behaviors.”

Scientists put an iPhone in a blender and turned it into dust. (University of Plymouth)

Apple uses a disassembly robot dubbed Daisy in its recycling effort, noting that the robot can take apart up to 200 iPhones an hour. In Apple’s Environmental Responsibility Report for its fiscal year 2017, the tech giant said that, for every 100,000 iPhone devices disassembled, Daisy has the potential to recover 1,900kg of aluminum, 93kg of tungsten, 11kg or rare earth elements, 7.5kg of silver and 0.97kg of gold.

Daisy is the successor to Liam, a robot reportedly custom built to disassemble the iPhone 6. "Our intention is to install Daisy in multiple locations around the world— starting with the United States and Europe," explains Apple, in its report. "Daisy will process end-of-life iPhone 5, iPhone 5s, iPhone SE, iPhone 6, iPhone 6 Plus, iPhone 6s, iPhone 6s Plus, iPhone 7, and iPhone 7 Plus devices that are returned to us by customers or via AppleCare."

IPHONE SALES ARE FALLING, AND APPLE'S APP FEES MIGHT BE NEXT

In 2015, Apple harvested almost $40 million of gold from recycled gadgets.