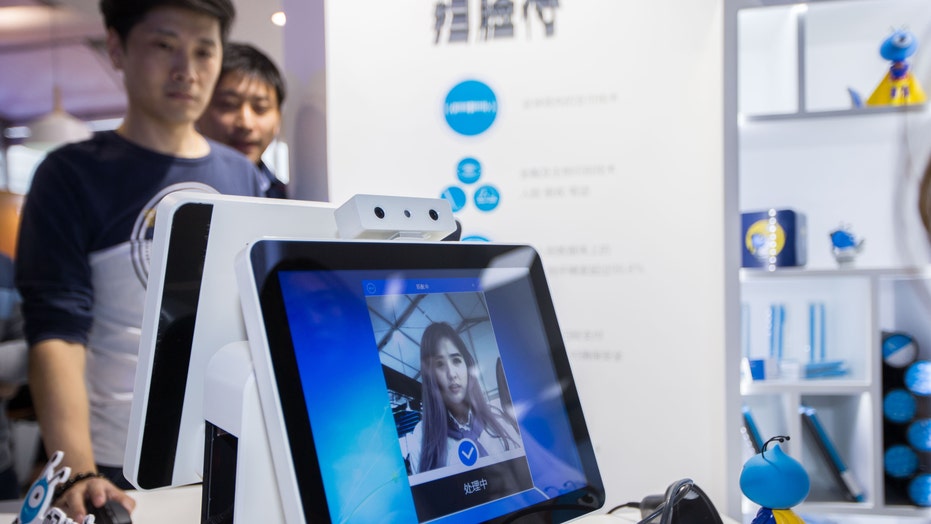 Chinese technology giants have leapfrogged U.S. companies in popularizing mobile payments. Now, they are trying to get people to bypass their smartphones and make payments by simply looking into screens.

Ant Financial Services Group and Tencent Holdings Ltd., rivals that operate, respectively, Alipay and WeChat Pay, China’s two largest mobile-payments networks, are competing for dominance in the next stage of China’s cashless society. Each is racing to install its own branded facial-recognition screens at retail points-of-sale all over the country, marketing the screens as a way to speed up sales and improve efficiency.

In the space of a few months, the two giants have rolled out two competing systems and an upgrade. In December, Ant’s Alipay, which has more than 700 million active users in China, was first to launch a facial-recognition payment machine for checkout cashiers. Ant is an affiliate of Alibaba Group Holding Ltd. Then, in March, Shenzhen-based Tencent unveiled its WeChat Pay system that can either scan QR codes on people’s phones or scan their faces, based on individuals’ preferences. The following month, Ant rolled out an upgraded Alipay facial-recognition system that was smaller—roughly the size of an iPad Mini—and cost 1,999 yuan (about $290), about one-third less than Alipay’s first facial-recognition payment system.

Analysts say the machines are here to stay.

“In China, facial recognition has developed into a fairly mature state and will likely be adopted as a standard feature for cashless transactions in the future,” says Zheng Qingzheng, an analyst with Suning Financial Research Institute.

The moves are notable because Alipay and WeChat Pay together already handle close to 90% of China’s third-party mobile payments market, where transactions totaled 160 trillion yuan ($23.16 trillion) last year, according to BigData-Research, a Beijing-based firm focused on the internet industry.

Alipay and WeChat Pay collect small fees from retailers when people use their payment networks, and as growth slows in user numbers and transaction volumes, both are fighting to get customers to use their services more. In April, Ant said it plans to spend 3 billion yuan ($434 million) subsidizing merchants that purchase the new devices and providing financial rebates to shoppers who make purchases with it.

Neither company has disclosed how many merchants have adopted the new technology so far. But facial-recognition machines accepting Alipay or WeChat Pay have appeared on vending machines, in grocery stores and even in hospitals across the country. The devices of both companies contain three-dimensional cameras to capture enough facial details to verify identities.

The computer works on the facial recognition at the Ant Financial booth ahead of 2016 The Computing Conference at Yunqi Cloud Town on October 12, 2016 in Hangzhou, Zhejiang Province of China.  (Getty Images)

China has been at the forefront of developing facial-recognition technology, which is now used in everything from government and corporate surveillance of citizens and employees, to toilet-paper dispensers in public bathrooms. Both Ant and Tencent have invested in other companies that specialize in facial-recognition technology. Facial-recognition software leaders SenseTime raised hundreds of millions of dollars from Alibaba, while Megvii received investments from both Alibaba and Ant Financial in private funding rounds. Ant in 2016 also acquired EyeVerify, based in Kansas City, Mo., which changed its name to Zoloz the following year.

In Hangzhou, where Ant is based, a KFC outlet was the first store in China to use Alipay’s facial-recognition payment technology. First-time users have to link the service to their Alipay accounts by entering a phone number, then they can use the machines to make payments without their mobile phones.

Wedome, a Chinese bakery chain, is using Alipay’s latest facial-identifying payment machines at more than 300 of its retail stores and in outlets without cashiers, where people can pick up cakes and bread from display shelves and check out items on their own.

Hu Bo, Wedome’s chief information officer, says the facial-recognition payment machines have helped increase the efficiency of the chain’s human cashiers by more than 60%. At some stores, he says, more than 70% of customers are now choosing to pay by scanning their faces.

Privacy concerns are a potential issue. A 2018 survey by the Payment & Clearing Association of China found that 85% of mobile-payments users surveyed were willing to make payments using biometric methods such as facial and fingerprint identification, but more than 70% cited safety of their personal data as their biggest concern.

Some users also say the facial-recognition technology hasn’t been as seamless as they expected. Zhang Lingling, a 31-year-old employee at a financial company in Nanjing, says she paid for a bottle of water using Alipay’s machine at a train station in March but found the process cumbersome.

It was her first time and she had to try repeatedly before she could link an image of her face to her Alipay account. On another occasion, when Ms. Zhang tried to make a payment, the machine’s camera was unable to capture an image of her entire face because the camera was too high. “I only tried out of curiosity, but won’t use it if I’m running out of time,” Ms. Zhang says.

Wang Haowei, a 19-year-old English major at a university in Hangzhou, says he likes to pay at convenience stores and vending machines on campus by scanning his face.

“It is super convenient,” he says. And, since it works without a smartphone, he says, it eliminates worries about being unable to make a payment using a smartphone when the battery is low.

Click here to read more from The Wall Street Journal, where this story was first published.