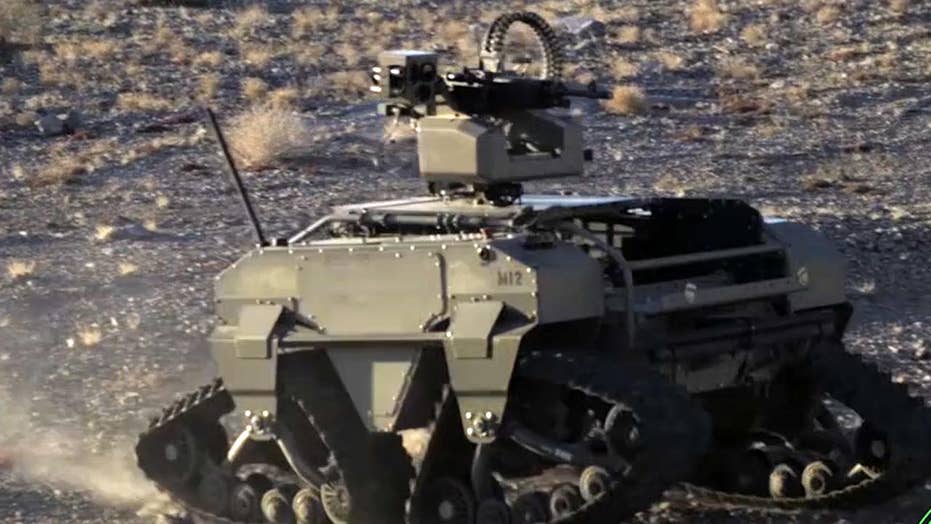 The U.S. Marines could deploy a host of futuristic military technology to "storm the beaches."

Included in the new technology are machine-gun toting robots that charge up the beaches as advance assault, as well as speedboats that instantly transformed into small stealthy submarines diving beneath the surface to avoid detection.

For the past two weeks, the Navy and Marine Corps have been quietly testing about 50 new fascinating technologies out at Camp Pendleton, at the Ship-to-Shore Maneuver Exploration and Experimentation Advanced Naval Technology Exercise 2017, in California.

The exercise is investigating how the military can leverage the latest technological advances for ship-to-the-shore, or the space between the Naval ship and the beach where they could potentially land.

Sailors and Marines have been experimenting with the technology and evaluating the wide range of sea, air and land innovations in a variety of realistic scenarios.

Why add this new technology?

In light of escalating tensions around the globe, the event is timely because “storming the beaches” has changed a lot since it was done in Normandy, France during World War 2.

Adversaries now possess technology that makes it difficult – if not impossible – to surprise them with a large-scale amphibious invasion. Even a kid with a social media account could post a picture that tips off forces are attempting a covert approach, making covert operations that much more difficult.

By using the newest advanced technology, it can help Marines to mount an aggressive beach invasion – and do it in a way that significantly reduces the risk to the lives of Marines compared to times past.

In this exercise, the Marines have been integrating the tech, such as robots, to explore how they can provide advantages in future wars. Drones can be assigned scout type roles collecting data, conducting surveillance and doing reconnaissance.

If robots are deployed to go ashore first, it could save Marine lives.

Designed by General Dynamics, Multi-Utility Tactical Transports (MUTTs) are smart, ATV-sized robots mounted with machine guns that can charge up a beach and drive themselves, while helping dismount small units.

Surf, sand and steep inclines are not going to stop the water-friendly MUTTs. The vehicles drive on tracks, or wheels, and there are two wheeled variants: 8x8 and 6x6.

The robot can be mounted with a range of different weapons, including machine guns.

THESE NEW KINDS OF BULLETS ARE LETHAL UNDERWATER

The Browning M2 .50 caliber machine gun that weighs about 84 pounds is one option. Others include the belt-fed fully automatic FN Hershel 240B medium machine gun and the classic SAW (Squad Automatic Weapon M249).

Beyond machine guns, they’ve also been successfully kitted out with options like 60mm mortars.

Handy for forces on the move, MUTTs can integrate into the human squad and ease some of the burdens of the soliders

Able to carry approximately 600 pounds, ground forces can harness the power of this weapon without having to lug around the weight themselves. Hence, the MUTT can carry the heavy weapons that provide even more serious firepower.

The Fathom, made by Reynolds Marion, is a speedboat that transforms into a submarine.

Sleek and black, it looks like something that would be a must-have for Batman.

Aside from the hybrid speedboat-submarine being worthy of a Hollywood summer blockbuster, it could potentially be used for tasks like scouting and surveillance. It could travel rapidly ahead of the fleet speeding along the surface.

Marion calls the hybrid Fathom, a “HyperSub.” A specific model was created and brought to this exercise with details rather hush hush. But in general, the HyperSub can deploy from a beach or a dock and with its two 480-hp Yanmar 6LY3-ETP diesel engines reach cruising speeds of 38 mph.

To evade enemy detection, it could dive beneath the surface. Able to recharge dive air and batteries, the vehicle can dive repeatedly. It is designed to provide protection from pressure changes.

The HyperSub has more than 30,000 pounds of lift on demand. When the “coast is clear,” the Fathom can surface again and zip along the shore conducting surveillance.

The dry chamber, where the vehicle is driven and personnel sit, can be customized.

Another hybrid that the Navy and Marine Corps has been testing in this exercise is the solar and wind powered Submaran. This innovation is part sailboat and part submarine.

The United States used to be able to rely on Naval supremacy. But now, countries like China – who just revealed a new aircraft carrier this week are expanding and advancing their Naval capabilities rapidly.

Terrorists can cause damage and loss of life by taking advantage of the accessibility and low price point of devices like basic unmanned aerial vehicles combined with readily available explosive material.

Identifying and exploring useful new technologies and rapidly transitioning them to the force is an important step to maintaining US maritime supremacy and reducing risk to the lives of Marines in future conflicts.