Twitter CEO Jack Dorsey on Sunday came under fire for tweeting about spending money at a Chick-fil-A restaurant in Los Angeles over the owner’s views on gay marriage.

Dorsey tweeted a screenshot of his purchases and savings made by using the fast-food restaurant’s mobile app, prompting a backlash from LGBTQ community and the media. 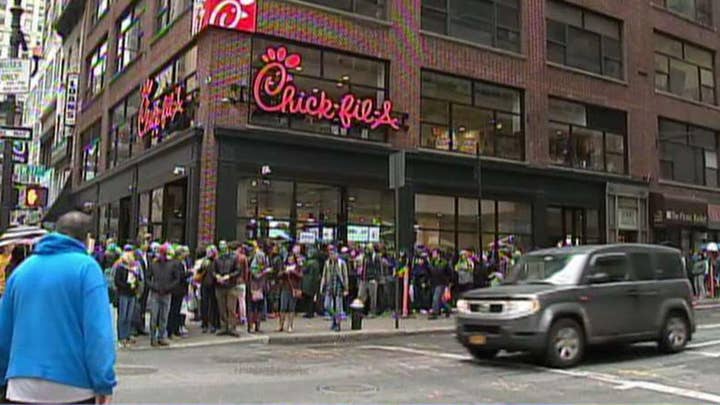 The fast-food chain has been criticized over CEO Dan Cathy's views concerning gay marriage. In 2012, he came out in defense of the traditional definition of marriage and expressed views critical of gay marriage stemming from his Christian faith.

“This is an interesting company to boost during Pride month, Jack,” wrote former CNN anchor Soledad O’Brien, who pointed out that June is dedicated to celebrating LGBT community.

Others quickly joined in condemning Dorsey, with one saying “On behalf of the whole LGBTQ community, Jack, kindly boost your head out of your a--.”

“Please delete this or follow up with how much free advertising you're going to give GLAAD,” wrote another user, referring to the LGBTQ organization.

Dorsey issued an apology for the purchase at the restaurant, telling O’Brien: “You’re right. Completely forgot about their background.”

But the latest remark sparked another round of backlash, this time from more conservative social media users, who questioned what the CEO of Twitter meant by “their background.”

“’Background’ meaning they employ 41,000 people, many of whom are the most pleasant fast food employees in the country, serve delicious food at good prices, and at amazing speed? That background?” wrote journalist Jeryl Bier.

“You mean their late CEO being a Christian? Apparently that is something bad/terrible, having faith, running a decent business, never discriminated against anyone, for the ‘tolerance, acceptance, and inclusivity’ crowd,” wrote another user.