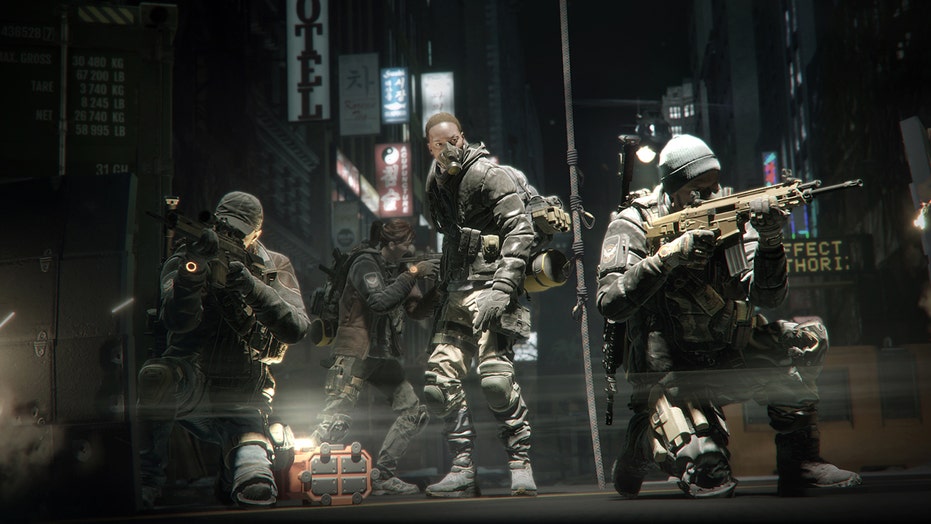 Diseased NYC erupts in chaos in 'Tom Clancy's The Division'

Fox Gamer: Take a first-hand look at 'Tom Clancy's The Division' and find out what it takes to play as an elite government sleeper agent trying to save New York City

"Tom Clancy’s The Division" had the biggest first week ever for a new video game franchise, with over 9.5 million registered users clocking an average of three hours a day, according to its publisher, Ubisoft.

There’s a reason for that.

The game marries a compelling storyline and a beautifully rendered modern-day New York City setting with multiplayer functionality, a rich soundtrack and first-rate weapons and customizations. While there are some glitches, repetitiveness and a lack of personal connection to the characters, the pros definitely outweigh the cons.

Related: The 9 most exciting announcements from Sony's E3 2016 event

Storyline:
A gripping intro sets the scene: New York is devastated and on the brink of collapse in the aftermath of a smallpox pandemic, and it’s your job to prevent the fall of civilization. Pretty scary, right?

I enjoyed the narrative’s creative execution. And as I went through the game, I got to learn more about the story, with key moments receiving full cut scenes and constant radio banter clarifying how my next objective would contribute to the mission of saving the city.

What made the storyline all the more compelling was that the inspiration for "The Division" came from a real-world event called Operation Dark Winter, a senior-level bioterrorist attack simulation conducted in 2001. Intended to establish better response strategies, it carried out a mock version of a smallpox attack on the U.S.

Related: Student takes video game to prom as date, and everyone loves it

Graphics/Scenery:
The haunting recreation of midtown Manhattan gave this native New Yorker the jitters. I felt like I was wandering through very familiar streets as I saw civilians fighting over food, corpses piled up in parks, hopeless graffiti covering some walls, collectibles and pictures from what was lost, children being treated at the pediatric ward in the “Base of Operations” and signs like “New York will rise again!” appearing by the Flatiron Building, providing an inkling of hope.

The game lives up to the visual hype. It’s jaw-dropping, even after the “graphical downgrades” during production. The level of detail is impressive: You leave accurate boot marks in the snow and you cast shadows when you walk down the street. When you shoot at a car window, it leaves a precise ripple effect as chunks of glass fall off, making it feel all too real.

Soundtrack:
The sound designers went to great efforts to enrich the gameplay experience by embodying the feel of the scene, the diverse locations and the danger that lurks in the background.

The relaxing tones of walking through the safe house or Times Square contrast wonderfully with the musical suspense you hear when you go rogue in the “Dark Zone” or Grand Central in mission mode.

Multiplayer/Co-op:
This game uses raw human nature to create a PvPvE (Player versus Player versus Environment) AI (Aritificial Intelligence) experience that’s suspenseful, fun and exhilarating, and it’s definitely better with friends. You can play in teams of up to four outside the Dark Zone, but once you’re inside, you can decide to collaborate with other agents or betray them, kill them and take their loot.

Honestly, players can get quite savage. One moment you’re waving hello to a fellow agent, and moments later that person you thought was your friend may murder you in cold blood. I found that players can turn the odds of the game around if they play together in the lawless Dark Zone.

Repetition:
I was pumped when I started playing, but, unfortunately, very similar side missions, shooting the same AI enemies from place to place and walking through the same streets got too repetitive throughout the game.

The enemies can be really difficult to kill and don’t fight any differently, regardless of which “group” they belong to, making them all feel the same.

Also, aside from some body bags, you never see the effects of the virus. It’s a missed opportunity to evoke emotion and connect the player to the catastrophe behind the game.

Overall: "Tom Clancy’s The Division" is the best open-world game Ubisoft has created. The gameplay is complex and rewarding –almost everything that was advertised. If you love the shooting game genre, you’ll be satisfied. But if you don’t, there are few things you can do that don't involve guns. There is a lot to expand on, since the game takes place in just a small part of Manhattan. But over time, this game can reach its full potential.