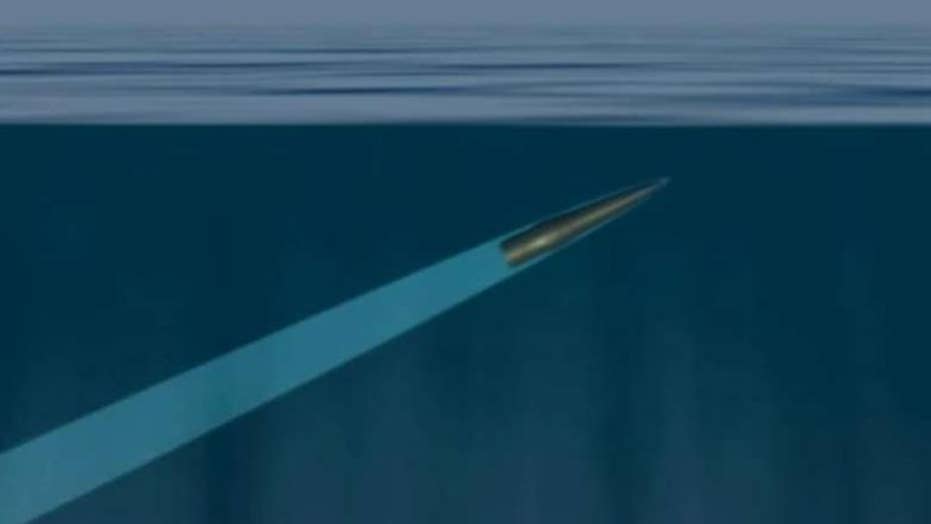 New breed of bullets could be used for underwater firefights

Tech Take: Allison Barrie on the new kind of bullets designed to deliver lethality at much farther distances underwater

A new breed of bullets could be used for underwater firefights.

The CAV-X supercavitating bullets, made by DSG Technology, are designed to deliver lethality at much farther distances underwater.

For special operations teams, such as the Navy SEALs and combat divers who operate around water, this sort of ammunition could be handy.

Availability and the tech behind it

Water is denser than air and with the extra drag bullets fast lose their velocity. Additionally, regular bullets tend to be inaccurate and have a short range underwater, so their utility is limited.

(MythBusters did a great demonstration where they showed even a sniper rifle couldn’t get a bullet more than a couple of feet before it sank.)

These bullets don't require a special weapon to use these bullets; they're compatible with regular weapons, which is a definite advantage.

These new bullets have something known as supercavitation, which helps keep the bullet protected from the water's density.

By creating supercavitating ammunition, it helps form a bubble around the bullet, enveloping the object. With the bubble’s frictionless surface, it reduces that drag through the water and increases speed.

Supercavitation is something militaries have long investigated, with applications in creating faster torpedoes or underwater vehicles.

With torpedoes, for example, one approach has been to eject gas out of the nose of the torpedo to create the bubble, which could help the torpedo surpass speeds of more than 200 miles per hour.

The bullets are designed to provide excellent penetration even at low angles. At Navy League Air Sea Space, the DSG team showcased a plate to demonstrate the difference between regulation ammunition and its offerings. At a low angle, regular ammo ricocheted, but the DGS ammo penetrated.

NFL PLAYERS AND COMBAT VETERANS JOIN FORCES TO SAVE LIVES

Enhancing the ability to shoot from low angles could also be helpful around water work such as shooting from submerged positions or entry into and exit from water.

How could this kind of bullet be used?

The ammunition can be used in an underwater firefight (known as water-to-water), but there are other applications as well.

It can also be useful for air-to-water requirements like shooting rounds into the water from a helicopter, Zodiac or littoral combat ship deck.

These bullets could also be useful in the reverse as in shooting from underwater at a target above water. Teams could stealthily approach a vessel from underwater and from a submerged, hidden position shoot adversaries onboard.

Potential applications for the ammunition include countering piracy and protecting ports.

How effective is this “swimming” ammo?

HERE'S HOW 'INVISIBLE ARMOR' COULD DEFEAT BULLETS AND BLADES

Taking the 5.56 mm NATO Cav-X as one example, the company says the typical effective range in the water is 35 feet. For sub-sonic, it is about 43 feet in the water.

Machine gun round 12.7mm NATO Cav-X has an effective range of nearly 200 feet underwater, according to the company.

According to the company, at larger calibers, the ammunition could even potentially defeat torpedoes and even a submarine.