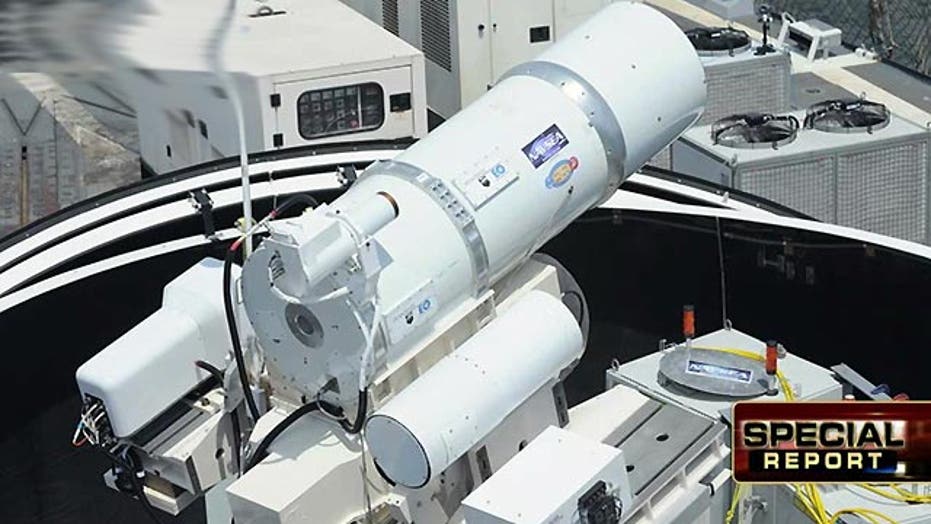 What are advantages of new weapon?

The Pentagon has plans to deploy its first ever ship-mounted laser next year, a disruptive, cutting-edge weapon capable of obliterating small boats and unmanned aerial vehicles with a blast of infrared energy.

Navy officials announced Monday that in early 2014, a solid-state laser prototype will be mounted to the fantail of the USS Ponce and sent to the 5th fleet region in the Middle East for real-world experience.

'It operates much like a blowtorch ... with an unlimited magazine.'

Video released by the Navy shows the laser lock onto a slow-moving target, in this case an unmanned drone, which bursts aflame in mid-flight. The drone soon catches fire and crashes into the sea below.

"It operates much like a blowtorch ... with an unlimited magazine," one official said.

There are potential targets for the laser in the 5th fleet region, which includes the Persian Gulf, where Iran operates small surveillance drones and is known for swarming and harassing U.S. Navy ships with small, armored speed boats.

Navy researches say so far the laser is 12 for 12 in testing, destroying its targets 100 percent of the time. Officials who briefed the press on the laser gun -- which the Navy calls a "directed energy pulse weapon" -- say it has non-lethal functions too, and may be used to send warning signals to other vessels.

One of its major advantages, the Navy said, is its relatively low cost to operate. "Its weapon round costs about $1 to shoot," said Rear Admiral Matthew Klunder, chief of Naval Research. Although the unit cost is higher -- at around $32 million to produce.

Still, Navy officials say this is a major accomplishment when compared to the Airborne Laser, the Air Force's now cancelled project to put nose-mounted lasers on its aircraft. Those lasers cost nearly $1.5 billion a piece.

“This wasn’t demonstrated on a barge. This was on a naval warship. And the performance results were quite astounding,” Klunder said.

There are some concerns with the new technology, however. Navy officials expressed worries with its ability to fire in poor weather conditions and believe the 5th fleet region will be a great test of the weapon’s abilities. It's also unclear if the laser can effectively take down faster moving objects, such as fighter jets.

Officials also would not reveal the range of this new weapon, describing it as more of a "close in" system. Energy levels were also classified. If successful, it will eventually be painted Navy grey and mounted on top of the ship with the rest of the major weapons systems.

The Navy and other armed forces have been experimenting for years with these directed energy weapons -- laser guns to you and me. Such weapons could be the future of warfare.

In April 2011, the Navy conducted a more limited test of a similar weapon, blasting a boat from the water with a laser weapon. Nevin Carr, chief of Naval Research at the time, said this energy weapon would not handle all types of threats, however.

"To begin to address a cruise missile threat, we'd need to get up to hundreds of kilowatts," Carr said.

The Navy is working on just such a gun of course.

Called the FEL -- for free-electron laser, which doesn't use a gain medium and is therefore more versatile -- it was tested in February 2011, consuming blistering amounts of energy and burning through feet of raw steel.

The FEL will easily get into the kilowatt power range, experts say. It can also be easily tuned as well, to adjust to environmental conditions, another reason it is more flexible than the fixed wavelength of solid-state laser. But the Navy doesn't expect to release megawatt-class FEL weapons until the 2020s; among the obstacles yet to be overcome, the incredible power requirements of such weapons.

Also in the Navy's futuristic arsenal: a so-called "rail gun," which uses an electomagnetic current to accelerate a non-explosive bullet at several times the speed of sound. Railguns are even further off in the distance, possibly by 2025, the Navy has said.